In heraldry, gules (/ˈɡjuːlz/) is the tincture with the colour red. It is one of the class of five dark tinctures called "colours", the others being azure (blue), sable (black), vert (green) and purpure (purple).

In engraving, it is sometimes depicted by hatching of vertical lines. In tricking—abbreviations written in areas to indicate their tinctures—it is marked with gu..

The term gules derives from the Old French word goules, literally "throats" (related to the English gullet; modern French gueules), but also used to refer to a fur neckpiece, usually made of red fur.[1]

A.C. Fox-Davies [2] states that the term originates from the Persian word گل gol, "rose", but according to Brault,[3] there is no evidence to support this derivation. 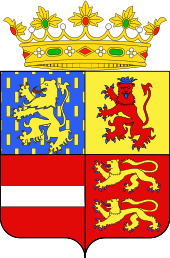 Gules is the most widely used heraldic tincture. Through the sixteenth century, nearly half of all noble coats of arms in Poland had a field gules with one or more argent charges on them.[citation needed]

Examples of coats of arms consisting of purely a red shield (blazoned gules plain) include those of the d'Albret family, the Rossi family, the Swiss canton of Schwyz (prior to 1815), and the old coats of arms of the cities of Nîmes and Montpellier.