Halfway Bush is a suburb of the New Zealand city of Dunedin. It is located 3 kilometres (1.9 mi) to the northwest of the city centre, close to the point at which Taieri Road becomes the winding rural Three Mile Hill Road. It was this road which gave the suburb its name, as this locality was halfway between the Taieri Plains and central Dunedin in the early days of European settlement, when Three Mile Hill was the main route from Dunedin to the Otago hinterland. This route was superseded by the route through the Caversham Valley in the 1860s. 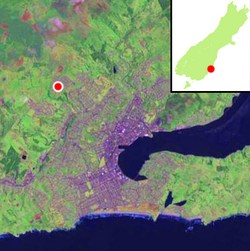 Halfway Bush is the most inland of the suburbs which comprise Dunedin's main urban area, and is at an altitude of 280 metres (920 ft). For these reasons, it often receives harsher winter weather than much of the rest of the city. Whereas central Dunedin may only receive passing snow showers on average one or two days per year, snow will often settle on the streets of Halfway Bush for several days per year.

The suburb is connected to central Dunedin by Taieri Road, which runs through the suburb to the suburb of Wakari to the southeast. From Wakari, the road rises to pass under the Roslyn Overbridge before descending into the centre of the city as Stuart Street. The smaller suburb of Helensburgh lies to the east of Halfway Bush, but the suburb is surrounded by rural land to the north and west. To the southwest lies Fraser's Gully, a scenic reserve, which separates Halfway Bush from the suburb of Brockville. A popular alternative route to central Dunedin is via Maori Hill and Drivers Road to George Street.

Halfway Bush mainly consists of Taieri Road and a series of crescents which branch from it. Chief among these are Ashmore Street and Gilkison Street, the latter of which connects with Wakari Road, a long, straight semi-rural road which links Taieri Road with Glenleith, 2.2 kilometres (1.4 mi) to the northwest, by way of Helensburgh and the forest plantations surrounding Ross Creek Reservoir.

Prominent buildings in the Halfway Bush area include Halfway Bush School, the local primary school, and two health facilities; Wakari Hospital, which is located at the eastern end of the suburb, and Ashburn Hall, a private psychiatric clinic, at the point where Taieri Road becomes Three Mile Hill Road, close to the suburb's western end.