The High Fens (German: Hohes Venn; French: Hautes Fagnes; Dutch: Hoge Venen), which were declared a nature reserve in 1957, are an upland area, a plateau region in Liège Province, in the east of Belgium and adjoining parts of Germany, between the Ardennes and the Eifel highlands. The High Fens are the largest nature reserve or park in Belgium, with an area of 4,501.2 ha (11,123 acres; 45.012 km2); it lies within the German-Belgian natural park Hohes Venn-Eifel (700 km2 (270 sq mi)), in the Ardennes. Its highest point, at 694 metres (2,277 ft) above sea level, is the Signal de Botrange near Eupen, and also the highest point in Belgium. A tower 6 metres (20 ft) high was built here that reaches 700 metres (2,297 ft) above sea level.[2][3] The reserve is a rich ecological endowment of Belgium covered with alpine sphagnum raised bogs (not "fens" as the name would imply) both on the plateau and in the valley basin; the bogs, which are over 10,000 years old, with their unique subalpine flora, fauna and microclimate, are key to the conservation work of the park.[4][5]

In 1966, the European Council awarded the "Diploma of Conservation" to the High Fens, for their ecological value.[3] 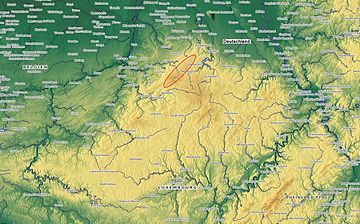 Ardennes and Eifel highlands; the ellipse marks the location of the High Fens.

The High Fens, established as a reserve in 1957, with their high altitude and unique location, consist mainly of raised bogs, and low, grass- or wood-covered hills, moorland and forest. The provincial capital of Liège is to its west, the German border is to the east and the dark forested hills of the Ardennes surround the southern part. The park stretches between Eupen in the north, Monschau in the east, Spa in the west and Malmedy in the south.[4] It stretches north of Malmedy as far as Eupen and marks the end of the Ardennes proper. It is contiguous with the Eifel hills, which stretch east from the German border to form the large Deutsch–Belgischer Naturpark.[6] Signal de Botrange located in the Haute Fagnes is marked by a Telecom Tower erected over an older artificial, earthen mound with stone steps that was built to raise a small part of the broad plateau from 694 to 700 metres (2,277 to 2,297 ft).[7] Large urban centres in the vicinity of the reserve are Eupen, Verviers, Spa and Malmedy.

Part of the High Fens reserve remains closed during the spring breeding season of the endangered black grouse (Tetrao tetrix).[5] During the summer there is a risk of fire in the forest area. Boardwalks cross the bogs, permitting access across these areas. Paths lead to many areas of the park, and there are signposts to guide visitors through the park.[6] The nature reserve of the High Fens is coordinated under the Nature Division and Forests of the Walloon Region.

The reserve is one of the wettest and coldest parts of Belgium. It is frequently shrouded in mist and low cloud. It has a subalpine climate with strong winds and fierce winters, which are occasionally subarctic.[5][6] The Fagnes plateau intercepts clouds brought by the prevailing Atlantic winds, and this results in copious precipitation, with an average of 1,400 millimetres (55 in) of rain per year. However, beneath the fragile composition of the overlying soils are rocky beds and clay that prevent infiltration of water and thus create the conditions for wetlands, marshes and bogs.[8] 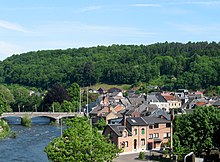 The bridge on the Amblève River.

Several rivers have their sources in the High Fens: the Vesdre, Hoëgne, Warche, Gileppe, Eau Rouge, Amblève, Our, Kyll, and Rur. In winter all the water sources freeze into snow[clarification needed] making the High Fens one of the best ski resorts in Belgium. During winter the swamps appear as if "wrapped in white fluffy snow shawl".[11]

The region has been zoned under a regulation of 1992 into specific zones, keeping in view the access areas provided for visitors and tourists. The areas are allocated to three zones: B, C, and D. Zone B is open daily to the public subject to regulations: bicycles and dogs are forbidden; one must keep to identified tracks; waste is to be disposed of only in trashcans; and silence is to be maintained. Zone C can be visited only accompanied by a guide authorised by the park administration. However no access to this zone is allowed from mid-March to late June, when an endangered species, the black grouse, breeds here. Zone D is a totally protected reserve area, with no access to the public.[3]

Panorama of the High Fens

In the High Fens the habitats of many plants and animals typically found further north or in the mountains, result from the geology and relief, the harsh climate, high rainfall, long and cold winters and low average temperatures in the region.[10]

The High Venn's plateau thus is rich in flora and fauna some of which have become rare and threatened in the last more than three centuries. The heathers and turf moors in the reserve have a significant role to maintain biodiversity for the rare and threatened flora and fauna as it ensures regulation of the water balance and maintains value of the landscape. However, since the 17th century, peat cutting, drainage, inappropriate spruce plantations, infestation of the ground by the purple moor-grass, a herb, had caused problems for the ecology of the region. These negative aspects are now being rectified by special projects titled "Life-Nature Project".[12]

The common heather or Calluna, a small bush of 20–50 centimetres (8–20 in) height is grazed by sheep and also has healing qualities; the bilberry, in the family Ericaceae, is a shrub found at an altitude of 500 m (around 1600 feet); the rootless peat mosses (Sphagnum) of about 40 centimetres (16 in) grow at 3 centimetres (1 in) a year and form the basic turf moors through the buildup of organic matter; cotton grass, a perennial plant in wet regions; sundew (Drosera rotundfolia) found in the acid turfs of the reserve which are carnivores and consumes insects; and wintergreen chickweed (cerastium), which is a seven-petal flower and also the logo of the park.[13][14] 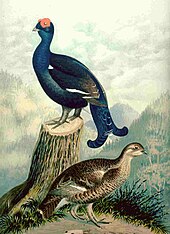 An illustration of the black grouse (Tetrao tetrix), male and female from an early 20th-century natural history 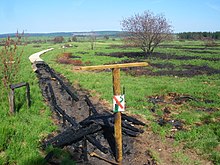 Burnt path in Helle Valley in High Fens, in May 2011, one month after the fire

As the habitat consists of bogs, fire is a major hazard during the drought period, when the Fens are closed except for a small fen area near Polleur [fr]. Triangular signs painted in red are fixed at the fire hazard locations.[3] In April 2011, in a fire that broke out in the High Fens, 1,000 hectares (2,500 acres) of land were destroyed. Stated to be the biggest ever fire in the Fens, 300 firefighters supported by a helicopter were involved in dousing and controlling the fires.[16]

The winter sports activities allowed in the Fens in specified area and outside conserved area of the fens are skiing, bicycling and trekking. Cross-country skiing in the High Fens is permitted on specified forest tracks which are located in the outskirts or even outside the nature reserve. Hiking trails have been reorganized outside the parks reserved areas. The walk routes would be limited to undergrowth adjacent to nature reserve. Bicycle routes have been specified outside the nature reserve in nearby forests.[3] The subalpine climate may change to subarctic condition and hence when taking adventure walks in the night through the park it could be hazardous unless one is properly equipped for taking such a risk.[5]

Another notable monument is at Gèyeté (Gayetay) within the municipal boundary of Sart and Jalhay; it is in memory of eight American airmen who were the crews of three Douglas C-47 Skytrains that collided in flight on 6 April 1945 due to fog. The memorial consists of a three-bladed propeller erected on a quartzite pedestal, with a cross erected next to it with the inscription "For the American airmen."[17][18]