This article is about places of human settlement. For the process of settlement, see Human migration. For different uses, see Settlement.
"Populated place" redirects here. For USGS definition of a populated place, see Unincorporated area.

In geography, statistics and archaeology, a settlement, locality or populated place is a community in which people live. The complexity of a settlement can range from a small number of dwellings grouped together to the largest of cities with surrounding urbanized areas. Settlements may include hamlets, villages, towns and cities. A settlement may have known historical properties such as the date or era in which it was first settled, or first settled by particular people. 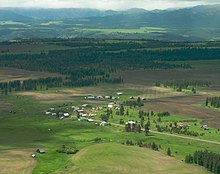 The small town of Flora, Oregon in the United States is unincorporated, but is considered a populated place.

A field landscape of the rural Pajuniemi village in Sastamala, Pirkanmaa, Finland. 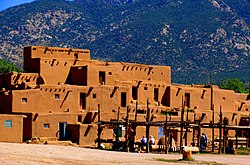 Taos Pueblo, an ancient pueblo belonging to a Taos-speaking Native American tribe of Pueblo people. It is approximately 1000 years old and lies about 1 mile (1.6 km) north of the modern city of Taos, New Mexico.

In the field of geospatial predictive modeling, settlements are "a city, town, village or other agglomeration of buildings where people live and work".[1]

The oldest remains that have been found of constructed dwellings are remains of huts that were made of mud and branches around 17,000 BC at the Ohalo site (now underwater) near the edge of the Sea of Galilee. The Natufians built houses, also in the Levant, around 10,000 BC. Remains of settlements such as villages become much more common after the invention of agriculture. 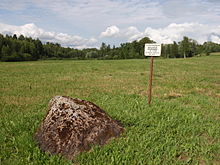 Some settlement sites may go out of use. This location in Estonia was used for human settlement in 2nd half of first millennium and it is considered an archaeological record, that may provide information on how people lived back then.

Landscape history studies the form (morphology) of settlements – for example whether they are dispersed or nucleated. Urban morphology can thus be considered a special type of cultural-historical landscape studies. Settlements can be ordered by size, centrality or other factors to define a settlement hierarchy. A settlement hierarchy can be used for classifying settlement all over the world, although a settlement called a 'town' in one country might be a 'village' in other countries; or a 'large town' in some countries might be a 'city' in others.

Geoscience Australia defines a populated place as "a named settlement with a population of 200 or more persons".[3]

The Committee for Geographical Names in Australasia used the term localities for rural areas, while the Australian Bureau of Statistics uses the term "urban centres/localities" for urban areas.[citation needed]

The Agency for Statistics in Bosnia and Herzegovina uses the term "populated place" / "settled place" for rural (or urban as an administrative center of some Municipality/City), and "Municipality" and "City" for urban areas.

The Canadian government uses the term "populated place" in the Atlas of Canada, but does not define it.[4]Statistics Canada uses the term localities for historically named locations.

The Census Commission of India has a special definition of census towns.

The Central Statistics Office of the Republic of Ireland has a special definition of census towns.

The Pakistan Bureau of Statistics records population in units of settlements called Tehsil – an administrative unit derived from the Mughal era.

There are various types of inhabited localities in Russia.

The UK Department for Communities and Local Government uses the term "urban settlement" to denote an urban area when analysing census information.[5] The Registrar General for Scotland defines settlements as groups of one or more contiguous localities, which are determined according to population density and postcode areas. The Scottish settlements are used as one of several factors defining urban areas.[6]

Populated places may be specifically defined in the context of censuses and be different from general-purpose administrative entities, such as "place" as defined by the U.S. Census Bureau or census-designated places.

In the field of geospatial predictive modeling, settlements are "a city, town, village, or other agglomeration of buildings where people live and work".[1]

) framework produces global spatial information about the human presence on the planet over time. This in the form of built up maps, population density maps and settlement maps. This information is generated with evidence-based analytics and knowledge using new spatial data mining technologies. The framework uses heterogeneous data including global archives of fine-scale satellite imagery, census data, and volunteered geographic information. The data is processed fully automatically and generates analytics and knowledge reporting objectively and systematically about the presence of population and built-up infrastructures. The GHSL

The term "Abandoned populated places" is a Feature Designation Name in databases sourced by the National Geospatial-Intelligence Agency[9] and GeoNames.[10]

Populated places can be abandoned. Sometimes the structures are still easily accessible, such as in a ghost town, and these may become tourist attractions. Some places that have the appearance of a ghost town, however, may still be defined as populated places by government entities.[citation needed]

A town may become a ghost town because the economic activity that supported it has failed, because of a government action, such as the building of a dam that floods the town, or because of natural or human-caused disasters such as floods, uncontrolled lawlessness, or war. The term is sometimes used to refer to cities, towns, and neighborhoods that are still populated, but significantly less so than in years past.[citation needed]