The Indo-Iranian languages (also Indo-Iranic languages[1][2] or Aryan languages[3]) constitute the largest and southeasternmost extant branch of the Indo-European language family. They have more than 1.5 billion speakers, stretching from Europe (Romani), Kurdistan (Kurdish and Zaza–Gorani) and the Caucasus (Ossetian) eastward to Xinjiang (Sarikoli) and Assam (Assamese), and south to Sri Lanka (Sinhala) and the Maldives (Maldivian), with branches stretching as far out as Oceania and the Caribbean for Fiji Hindi and Caribbean Hindustani respectively. Furthermore, there are large diaspora communities of Indo-Iranian speakers in northwestern Europe (the United Kingdom), North America (United States, Canada), Australia, South Africa, and the Persian Gulf Region (United Arab Emirates, Saudi Arabia).

The common ancestor of all of the languages in this family is called Proto-Indo-Iranian—also known as Common Aryan—which was spoken in approximately the late 3rd millennium BC. The three branches of the modern Indo-Iranian languages are Indo-Aryan, Iranian, and Nuristani. A fourth independent branch, Dardic, was previously posited, but recent scholarship in general places Dardic languages as archaic members of the Indo-Aryan branch.[4] 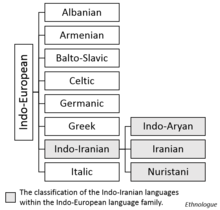 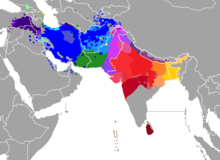 Distribution of the Indo-Iranian languages

The oldest attested Indo-Iranian languages are Vedic Sanskrit, Older and Younger Avestan and Old Persian (ancient Iranian languages). A few words from another Indo-Aryan language (see Indo-Aryan superstrate in Mitanni) are attested in documents from the ancient Mitanni and Hittite kingdoms in the Near East.

Within the Indo-European family, Indo-Iranian belongs to the Satem group. Various proposals have been made that link the Indo-Iranian languages with other subgroups of Indo-European (like Graeco-Aryan, which posits a close relationship with Greek and Armenian), but these remain without wider acceptance.

Innovations shared with other languages affected by the satem sound changes include:[citation needed]