The term inner city has been used, especially in the United States, as a euphemism for lower-income residential districts that often refer to run down neighbourhoods, in a downtown or city centre area.[1] Sociologists sometimes turn the euphemism into a formal designation by applying the term inner city to such residential areas, rather than to more geographically central commercial districts. 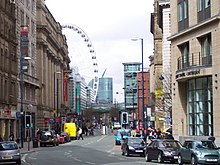 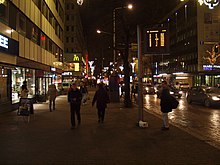 The word "downtown" is also used to describe the inner city or city centre – primarily in North America – by English-speakers to refer to a city's commercial, cultural and often the historical, political and geographic heart, and is often contiguous with its central business district. In British English, the term "city centre" is most often used, "centre-ville" in French, centro storico in Italian, Stadtzentrum in German or shìzhōngxīn (市中心) in Chinese. The two terms are used interchangeably in Canada. A few US cities, such as Philadelphia, use the term "Center City".

The term "inner city" first achieved consistent usage through the writings of white liberal Protestants in the US after World War II, contrasting with the growing affluent suburbs. According to urban historian Bench Ansfield, the term signified both a bounded geographic construct and a set of cultural pathologies inscribed onto urban black communities. Inner city thus originated as a term of containment. Its genesis was the product of an era when a largely suburban mainline Protestantism was negotiating its relationship to American cities. Liberal Protestants’ missionary brand of urban renewal refocused attention away from the blight and structural obsolescence thought to be responsible for urban decay, and instead brought into focus the cultural pathologies they mapped onto black neighborhoods. The term inner city arose in this racial liberal context, providing a rhetorical and ideological tool for articulating the role of the church in the nationwide project of urban renewal. Thus, even as it arose in contexts aiming to entice mainline Protestantism back into the cities it had fled, the term accrued its meaning by generating symbolic and geographic distance between white liberal churches and the black communities they sought to help.[2] 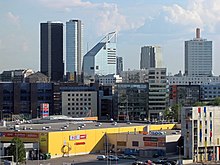 In Canada, in the 1970s, the government introduced Neighbourhood Improvement Programs to deal with urban decay, especially in inner cities.[4] Also, some inner-city areas in various places have undergone the socioeconomic process of gentrification, especially since the 1990s.[5]