Installation art is an artistic genre of three-dimensional works that are often site-specific and designed to transform the perception of a space. Generally, the term is applied to interior spaces, whereas exterior interventions are often called public art, land art or art intervention; however, the boundaries between these terms overlap. 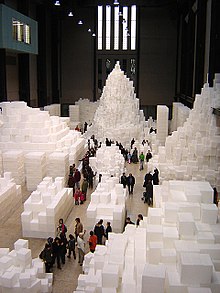 Visitors interact with a couple in bed, inside one of the many environments of La Menesunda (1965), one of the earliest large-scale installations in art history.[1][2]

Installation art can be either temporary or permanent. Installation artworks have been constructed in exhibition spaces such as museums and galleries, as well as public and private spaces. The genre incorporates a broad range of everyday and natural materials, which are often chosen for their "evocative" qualities, as well as new media such as video, sound, performance, immersive virtual reality and the internet. Many installations are site-specific in that they are designed to exist only in the space for which they were created, appealing to qualities evident in a three-dimensional immersive medium. Artistic collectives such as the Exhibition Lab at New York's American Museum of Natural History created environments to showcase the natural world in as realistic a medium as possible. Likewise, Walt Disney Imagineering employed a similar philosophy when designing the multiple immersive spaces for Disneyland in 1955. Since its acceptance as a separate discipline, a number of institutions focusing on Installation art were created. These included the Mattress Factory, Pittsburgh, the Museum of Installation in London, and the Fairy Doors of Ann Arbor, MI, among others.

Installation art came to prominence in the 1970s but its roots can be identified in earlier artists such as Marcel Duchamp and his use of the readymade and Kurt Schwitters' Merz art objects, rather than more traditional craft based sculpture. The "intention" of the artist is paramount in much later installation art whose roots lie in the conceptual art of the 1960s. This again is a departure from traditional sculpture which places its focus on form. Early non-Western installation art includes events staged by the Gutai group in Japan starting in 1954, which influenced American installation pioneers like Allan Kaprow. Wolf Vostell shows his installation 6 TV Dé-coll/age in 1963[3] at the Smolin Gallery in New York. 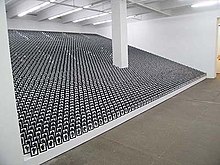 Installation as nomenclature for a specific form of art came into use fairly recently; its first use as documented by the Oxford English Dictionary was in 1969. It was coined in this context, in reference to a form of art that had arguably existed since prehistory but was not regarded as a discrete category until the mid-twentieth century. Allan Kaprow used the term "Environment" in 1958 (Kaprow 6) to describe his transformed indoor spaces; this later joined such terms as "project art" and "temporary art."

Essentially, installation/environmental art takes into account a broader sensory experience, rather than floating framed points of focus on a "neutral" wall or displaying isolated objects (literally) on a pedestal. This may leave space and time as its only dimensional constants, implying dissolution of the line between "art" and "life"; Kaprow noted that "if we bypass 'art' and take nature itself as a model or point of departure, we may be able to devise a different kind of art... out of the sensory stuff of ordinary life".

The conscious act of artistically addressing all the senses with regard to a total experience made a resounding debut in 1849 when Richard Wagner conceived of a Gesamtkunstwerk, or an operatic work for the stage that drew inspiration from ancient Greek theater in its inclusion of all the major art forms: painting, writing, music, etc. (Britannica). In devising operatic works to commandeer the audience's senses, Wagner left nothing unobserved: architecture, ambience, and even the audience itself were considered and manipulated in order to achieve a state of total artistic immersion. In the book "Themes in Contemporary Art", it is suggested that "installations in the 1980s and 1990s were increasingly characterized by networks of operations involving the interaction among complex architectural settings, environmental sites and extensive use of everyday objects in ordinary contexts. With the advent of video in 1965, a concurrent strand of installation evolved through the use of new and ever-changing technologies, and what had been simple video installations expanded to include complex interactive, multimedia and virtual reality environments".

In "Art and Objecthood", Michael Fried derisively labels art that acknowledges the viewer as "theatrical" (Fried 45). There is a strong parallel between installation and theater: both play to a viewer who is expected to be at once immersed in the sensory/narrative experience that surrounds him and maintain a degree of self-identity as a viewer. The traditional theater-goer does not forget that they have come in from outside to sit and take in a created experience; a trademark of installation art has been the curious and eager viewer, still aware that they are in an exhibition setting and tentatively exploring the novel universe of the installation.

The artist and critic Ilya Kabakov mentions this essential phenomenon in the introduction to his lectures "On the "Total" Installation": "[One] is simultaneously both a 'victim' and a viewer, who on the one hand surveys and evaluates the installation, and on the other, follows those associations, recollections which arise in him[;] he is overcome by the intense atmosphere of the total illusion". Here installation art bestows an unprecedented importance on the observer's inclusion in that which he observes. The expectations and social habits that the viewer takes with him into the space of the installation will remain with him as he enters, to be either applied or negated once he has taken in the new environment. What is common to nearly all installation art is a consideration of the experience in toto and the problems it may present, namely the constant conflict between disinterested criticism and sympathetic involvement. Television and video offer somewhat immersive experiences, but their unrelenting control over the rhythm of passing time and the arrangement of images precludes an intimately personal viewing experience. Ultimately, the only things a viewer can be assured of when experiencing the work are his own thoughts and preconceptions and the basic rules of space and time. All else may be molded by the artist's hands.

The central importance of the subjective point of view when experiencing installation art, points toward a disregard for traditional Platonic image theory. In effect, the entire installation adopts the character of the simulacrum or flawed statue: it neglects any ideal form in favor of optimizing its direct appearance to the observer. Installation art operates fully within the realm of sensory perception, in a sense "installing" the viewer into an artificial system with an appeal to his subjective perception as its ultimate goal. 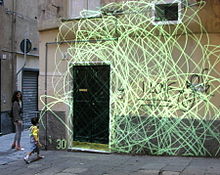 An urban interactive art installation by Maurizio Bolognini (Genoa, 2005), which everybody can modify by using a cell phone.

With the improvement of technology over the years, artists are more able to explore outside of the boundaries that were never able to be explored by artists in the past.[5] The media used are more experimental and bold; they are also usually cross media and may involve sensors, which plays on the reaction to the audiences' movement when looking at the installations. By using virtual reality as a medium, immersive virtual reality art is probably the most deeply interactive form of art.[6] By allowing the spectator to "visit" the representation, the artist creates "situations to live" vs "spectacle to watch".[7]