Intelsat operated a fleet of 52 communications satellites, which was then one of the world's largest fleet of commercial satellites.[5][needs update] As of 2016,[update] 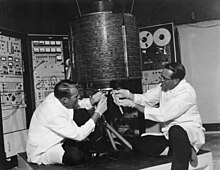 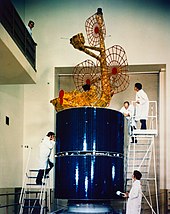 John F. Kennedy instigated the creation of INTELSAT with his speech to the United Nations on 25 September 1961.[7] Less than a year later, John F. Kennedy signed the Communications Satellite Act of 1962. INTELSAT was originally formed as International Telecommunications Satellite Organization (ITSO) and operated from 1964 to 2001 as an intergovernmental consortium owning and managing a constellation of communications satellites providing international broadcast services. In 2001, the international satellite market was fully[citation needed] commercialized, and the United States predominant role in INTELSAT was privatized after 2001 as Intelsat was formed up as a private Luxembourg corporation.

The International Governmental Organization (IGO) began on (August 20, 1964; 56 years ago), with 7 participating countries.[8] The 1964 agreement was an interim arrangement on a path to a more permanent agreement. The permanent international organization was established in 1973, following inter-nation negotiations from 1969 to 1971. The most difficult issue to "resolve concerned the shift from management of the system by a national entity to management by the international organization itself".[9]:46

On 6 April 1965, INTELSAT's first satellite, the Intelsat I (nicknamed Early Bird), was placed in geostationary orbit above the Atlantic Ocean by a Delta D rocket.

In 1973, the name was changed and there were 81 signatories.[10] INTELSAT was "governed initially by two international agreements: The Agreement setting forth the basic provisions and principles and structure of the organization, signed by the governments through their foreign ministries, and an Operating Agreement setting forth more detailed financial and technical provisions and signed by the governments or their designated telecommunications entities", — in most cases, the latter are the ministries of communications of the party countries, but in the case of the United States, was the Communications Satellite Corporation (COMSAT),[11] a private corporation established by federal legislation to represent the U.S. in international governance for the global communication satellite system.[9]:47 INTELSAT at that time directly owned and managed a global communications satellite system, and structurally consisted of three parts:[9]

The 1973 Agreement called for a seven-year transition from national to international management, but continued until 1976 to carve out "technical and operational management of the system [to the U.S. signatory] the Communications Satellite Corporation [which had also] served as the Manager of the global system under the interim arrangements in force from 1964 to 1973".[9]:49 Later phases of the transition resulted in full international governance by 1980. Financial contribution to the organization, its so-called "investment share", was strictly proportional to each member's use of the system, determined annually; and this corresponded to the weighted vote each would have on the Board of Governors.[9]:50

Intelsat provides service to over 600 Earth stations in more than 149 countries, territories and dependencies. By 2001, INTELSAT had over 100 members.[12] It was also this year that INTELSAT privatized and changed its name to Intelsat.[clarification needed]

Since its inception, Intelsat has used several versions (blocks) of its dedicated Intelsat satellites. Intelsat completes each block of spacecraft independently, leading to a variety of satellite manufacturing contractors over the years. Intelsat's largest spacecraft supplier by 2012 was Space Systems/Loral, having built 47 spacecraft (Intelsat 20) by that time.[13]

The network in its early years was not as robust as it is now. A failure of the Atlantic satellite in the spring of 1969 threatened to stop the Apollo 11 mission; a replacement satellite went into a bad orbit and could not be recovered in time; NASA used undersea cable telephone circuits as an alternative to route Apollo's communications to NASA during the mission.[14] During the Apollo 11 moonwalk, the Moon was over the Pacific Ocean, and so other antennas were used, as well as INTELSAT III, which was in geostationary orbit over the Pacific.[15]

By the 1990s, building and launching satellites was no longer exclusively a government domain and as country-specific telecommunications systems were privatized, several private satellite operators arose to meet the growing demand. In the U.S., satellite operators such as PanAmSat, Orion Communications, Columbia Communications, Iridium, Globalstar, TRW and others formed under the umbrella of the Alliance for Competitive International Satellite Services (ACISS) to press for an end to the exclusively-intergovernmental organizations operating communication satellites and the monopoly position of COMSAT the U.S. signatory to Intelsat and Inmarsat. In March 2001, the U.S. Congress passed the Open-market Reorganization for the Betterment of International Telecommunications (ORBIT) Act [16] to privatize COMSAT and reform the role of the international organizations. In April 1998, to address U.S. government concerns about market power, Intelsat's senior management spun off five of its older satellites to a private Dutch entity, New Skies Satellites, which became a direct competitor to Intelsat.[citation needed]

On 18 July 2001, Intelsat became a private company, 37 years after formation. Prior to Intelsat's privatization in 2001, ownership and investment in INTELSAT (measured in shares) was distributed among INTELSAT members[clarification needed] according to their use of services. Investment shares determined each member's percentage of the total contribution needed to finance capital expenditures. The organization's primary source of revenue was satellite usage fees which, after deduction of operating costs, was redistributed to INTELSAT members in proportion to their shares as repayment of capital and compensation for use of capital. Satellite services were available to any organization (both INTELSAT members and non-members), and all users paid the same rates.[citation needed]

Intelsat Americas-7 (known formerly as Telstar 7 and known as Galaxy 27 since on 1 February 2007) experienced a several-day power failure on 29 November 2004.[17] The satellite returned to service with reduced capacity.[18]

Intelsat was sold for US$3.1 billion in January 2005 to four private equity firms: Madison Dearborn Partners, Apax Partners, Permira and Apollo Global Management. The company acquired PanAmSat on 3 July 2006, and was then the world's largest provider of fixed satellite services, operating a fleet of 52 satellites in prime orbital locations.[citation needed]

In April 2013, the renamed Intelsat S.A. undertook an initial public offering on the New York Stock Exchange, raising a net US$550 million, of which US$492 million was paid immediately to reduce outstanding company debts of US$15.9 billion. In May 2013, the company announced it would be purchasing four new high-performance Boeing EpicNG 702 MP satellites.[20][21]

There were negotiations in 2017 that Intelsat could potentially merge with Softbank-backed OneWeb.[22] However, on 1 June 2017, it was announced that the bondholders would not accept the offer and that the potential merger would be terminated as of 2 June 2017.[23]

In 2015, Intelsat reincorporated in Delaware[why?] and became Intelsat Corporation.[citation needed]

Public reporting showed that the company had been considering bankruptcy protection as early as February 2020,[30] as Intelsat formally withdrew from the C-Band Alliance, an industry consortium of the major satellite operators that had been jointly lobbying the U.S. regulator Federal Communications Commission (FCC) regarding the reassignment and payment for its legacy 5G spectrum.[31][29]

According to company statements, the company is hoping to restructure so that it can raise requisite capital to launch new satellite technology in 2022/2023, at a cost of some US$1.6 billion, so that it can compress existing licensed C-band spectrum customers into just forty percent of the spectrum used in 2019, and thus enable the company to receive up to US$4.86 billion in "spectrum clearing payments" from the FCC for clearing the spectrum by December 2023, two years ahead of the FCC baseline plan.[29]

Intelsat has agreed to purchase one-half of the 2,000 kg (4,400 lb) propellant payload that an MDA Corporation spacecraft satellite-servicing demonstration project would take to geostationary orbit. Catching up in orbit with four or five Intelsat communication satellites, a load of 200 kg (440 lb) of fuel delivered to each satellite would add somewhere between two and four years of additional service life.[32] A near-end-of-life Intelsat satellite will be moved to a graveyard orbit 200 to 300 km (120–190 mi) above the geostationary belt where the refueling will be done, "without consequence" to the Intelsat business.[5]

the business model was still evolving. MDA "could ask customers to pay per kilogram of fuel successfully added to [each] satellite, with the per-kilogram price being a function of the additional revenue the operator can expect to generate from the spacecraft's extended operational life".[33]

The plan is that the fuel-depot vehicle would maneuver to several satellites, dock at the target satellite's apogee kick motor, remove a small part of the target spacecraft's thermal protection blanket, connect to a fuel-pressure line and deliver the propellant. "MDA officials estimate the docking maneuver would take the communications satellite out of service for about 20 minutes".[33]

On 1 February 2007, Intelsat changed the names of 16 of its satellites formerly known under the Intelsat Americas and PanAmSat brands to Galaxy and Intelsat, respectively.[35]

Over time, Intelsat has worked with most of the commercial launch services providers worldwide. Their satellites are often among the most massive of their generation, requiring the most powerful and reliable rockets on the market at a given time. In the 21st century, most Intelsat missions were conducted by Arianespace with the European Ariane 4 and Ariane 5 launchers, and by International Launch Services (ILS) with Proton-K and Proton-M rockets manufactured by Khrunichev in Russia. Intelsat also took advantage of the equatorial Sea Launch offering with Zenit-3SL rockets launched from the Ocean Odyssey floating platform in Pacific Ocean, until they suspended operations in 2014. On 30 May 2012, Intelsat signed a contract with SpaceX for one of the first Falcon Heavy launch vehicles,[36] marking the return of Intelsat to American launchers after many flights on Atlas II in the 1990s and a single Atlas V launch in 2009.