The International Institute for Democracy and Electoral Assistance (International IDEA) is an intergovernmental organization that works to support and strengthen democratic institutions and processes around the world, to develop sustainable, effective and legitimate democracies. It has regional offices in Europe, Latin America and the Caribbean, Asia and the Pacific and Africa and West Asia. The organization is headquartered in Stockholm, Sweden. 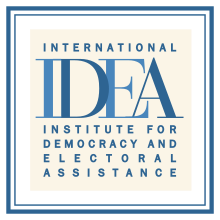 Logo of International Institute for Democracy and Electoral Assistance

The early 1990s were marked by challenges to democracy worldwide. The violent crackdown in Tiananmen Square in China happened in 1989, and Chile, Brazil, Uruguay and Argentina were all on a slow, difficult road toward democracy after having suffered similarly cruel military coups and dictatorships. Despite a long tradition of autocracy in South Korea, democratic dissident Kim Dae-jung became president. Nelson Mandela’s release in 1990 after serving 28 years in prison marked South Africa’s first step toward democracy. There were also wide-ranging discussions in other parts of Africa and Asia about how to incorporate democratic norms into their traditions and cultures.

More and more people around the world needed good advice about a number of choices that had to be made in order to make democracy work. In response to this need Sweden, along with 13 other countries took the initiative to found The International Institute for Democracy and Electoral Assistance, International IDEA.

The institute’s original structure consisted of a board of 9–15 persons, appointed in their personal capacities rather than as representatives of member states, which developed the work programme. The council (composed of one representative of each member and associate member) was responsible for approving the work programme and budget—despite not being consulted about their development—and for making sure the contributions supported the work program. A founding ‘nucleus’ board was established that comprised Shridath Ramphal, Adama Dieng and David Steel. Bengt Säve-Söderbergh, who was instrumental in the process of creating International IDEA from the start, was appointed its first secretary-general. Due to practical difficulties and overlapping responsibilities between the board and council, this model later changed.

As part of the institute's 20th anniversary celebration in 2015, Bengt Säve-Söderbergh wrote an essay, The Birth of an IDEA,[5] that captures how the organization was born and its relevancy. Säve-Söderbergh is the first secretary-general of International IDEA.

International IDEA's mission is to “advance democracy worldwide, as a universal human aspiration and an enabler of sustainable development, through support to the building, strengthening and safeguarding of democratic political institutions and processes at all levels”.[6] Additionally, International IDEA is dedicated to the following tasks:

International IDEA offers several online tools and databases including the Voter Turnout Database, Electoral Risk Management tool and the IntegriTAS Threat Assessment System.[7] Anyone can access data on topics such as voter turnout, electoral system design,[8] quotas for women and political finance laws and regulations.[9] Issues of gender, diversity, conflict and security are also addressed. Data from the International IDEA Political Finance Database relating to political disclosure is used as an indicator of public transparency and accountability in the Basel AML Index, a money laundering and terrorist financing risk assessment tool developed by the Basel Institute on Governance.

The organization is also a permanent representative to the United Nations, based in New York City.