The International Organization for Migration (IOM) is an intergovernmental organization that provides services and advice concerning migration to governments and migrants, including internally displaced persons, refugees, and migrant workers. In September 2016, IOM became a related organization of the United Nations.[1] It was initially established in 1951 as the Intergovernmental Committee for European Migration (ICEM) to help resettle people displaced by World War II. As of 2021, the International Organization for Migration has 173 member states and nine observer states.[2][3] 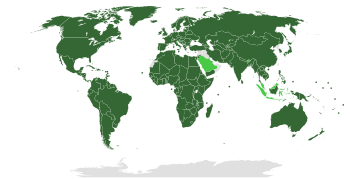 IOM is the principal intergovernmental organization working in the field of migration. IOM's stated mission is to promote humane and orderly migration by providing services and advice to governments and migrants.

IOM works to help ensure the orderly and humane management of migration, to promote international cooperation on migration issues, to assist in the search for practical solutions to migration problems and to provide humanitarian assistance to migrants in need, be they refugees, displaced persons or other uprooted people.

The IOM Constitution[4] gives explicit recognition to the link between migration and economic, social and cultural development.

In addition, IOM has often organized elections for refugees out of their home country, as was the case in the 2004 Afghan elections and the 2005 Iraqi elections.

IOM was born in 1951 out of the chaos and displacement of Western Europe following the Second World War. It was first known as the Provisional Intergovernmental Committee for the Movement of Migrants from Europe (PICMME). Mandated to help European governments to identify resettlement countries for the estimated 11 million people uprooted by the war, IOM arranged transport for nearly a million migrants during the 1950s.

While IOM's history tracks the man-made and natural disasters of the past half century—Hungary 1956, Czechoslovakia 1968, Chile 1973, the Vietnamese Boat People 1975, Kuwait 1990, Kosovo and Timor 1999, and the Asian tsunami, the 2003 invasion of Iraq, the Pakistan earthquake of 2004/2005, the 2010 Haiti earthquake, and the ongoing European migrant crisis—its credo that humane and orderly migration benefits migrants and society has steadily gained international acceptance.

From its roots as an operational logistics agency, IOM has broadened its scope to become the leading international agency working with governments and civil societies to advance the understanding of migration issues, encourage social and economic development through migration, and uphold the human dignity and well-being of migrants.

The broader scope of activities has been matched by rapid expansion from a relatively small agency into one with an annual operating budget of $1.8 billion and some 11,500 staff[5] working in over 150 countries worldwide.

As the "UN migration agency", IOM has become a main point of reference in the heated global debate on the social, economic and political implications of migration in the 21st century.[6] IOM supported the creation of the Global Compact for Migration, the first-ever intergovernmental agreement on international migration which was adopted in Marrakech, Morocco in December 2018.[7] To support the implementation, follow-up and review of the Global Compact on Migration, The UN Secretary General, Antonio Guterres, established the UN Network on Migration. The secretariat of the UN Network on Migration is housed at IOM and the Director General of IOM, Antonio Vitorino, serves as the Network Coordinator.[8]

The organisation of deportations to insecure countries such as Afghanistan and Iraq is criticised. For example, the Human Rights Watch, criticises IOM's participation in Australia's "Pacific Solution". On the Pacific island of Nauru, IOM operated the Nauru Detention Centre on behalf of the Australian government from 2002 to 2006, where Afghan boat refugees intercepted by the Australian military were imprisoned, including many families with children.[9]

Therefore, Amnesty International requests IOM to give assurances that it will abide by international human rights and refugee law standards; in particular to standards relating to arbitrary and unlawful detention, conditions of detention, and the principle of non-refoulement.[10]

The Human Rights Watch states their concerns that IOM has no formal mandate to monitor human rights abuses or to protect the rights of migrants, even though millions of people worldwide participate in IOM-sponsored programs.[9]

As of 2021, the International Organization for Migration has 173 member states and 9 observer states.[2]

IOM X is a Communication for Development campaign operated by the International Organization for Migration in Bangkok, Thailand.[11]

The campaign's stated purpose is: "to encourage safe migration and public action to prevent human trafficking and exploitation in the Asia Pacific region."[12]