Interstate 76 (I-76) is an east–west Interstate Highway in the Eastern United States, running about 435 miles (700 km) from an interchange with I-71 west of Akron, Ohio, east to I-295 in Bellmawr, New Jersey.

Just west of Youngstown, I-76 joins the Ohio Turnpike and heads around the south side of Youngstown. In Pennsylvania, I-76 runs across most of the state on the Pennsylvania Turnpike, passing near Pittsburgh and Harrisburg before leaving the Turnpike at Valley Forge to become the Schuylkill Expressway and eventually entering Philadelphia and then crossing the Walt Whitman Bridge into New Jersey. After I-76 reaches its eastern terminus, the freeway continues as Route 42 and the Atlantic City Expressway to Atlantic City. 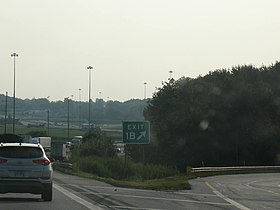 I-76 begins at exit 209 of I-71 in Westfield Township, approximately six miles (9.7 km) east of Lodi, Ohio; U.S. Route 224 (US 224) continues west from the end of I-76. The interchange was previously a double trumpet, but was reconstructed in 2010.[3] Officially, I-76 begins at the beginning of the ramp from I-71 north; it merges with US 224 at mile 0.61. After passing through rural Medina County, I-76 enters Summit County and soon crosses State Route 21 (SR 21, old US 21), once the main north–south route through the area until I-77 replaced it, at a cloverleaf interchange. I-76 then passes through Norton and Barberton, then enters Akron; this section of road was built as US 224.

Soon after entering Akron, I-76 turns north onto the short Kenmore Expressway. US 224 leaves I-76 there and continues east with I-277 towards I-77. Shortly after heading north from the I-277 interchange, I-76 meets I-77 and again turns east, joining southbound I-77 south of downtown Akron on the West Expressway. A partial interchange provides access to SR 59, the Innerbelt, and then I-76 crosses through the Central Interchange, where I-77 goes south (on the South Expressway) and SR 8 begins to the north (on the North Expressway); I-76 switches from the West Expressway to the East Expressway.

The interchange with I-80 west of Youngstown 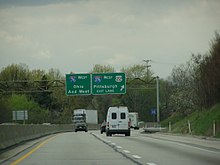 From the Ohio border, the Pennsylvania Turnpike carries I-76 into and across most of Pennsylvania, bypassing Youngstown to the south and Pittsburgh to the north. From the Ohio border until Warrendale, the turnpike uses a non-ticketing toll system while east of Warrendale, the ticketing system begins. There is a free interchange with US 19 and I-79 near Wexford. At one point, I-76 used to begin in Pittsburgh on a route that is now signed as I-376, around the 1970s. It intersects with this highway in Monroeville.

I-76 at the Allegheny Mountain Tunnel

From New Stanton to Breezewood, I-76 is concurrent with I-70. In this section are the bypass (built in the 1960s) of the Laurel Hill Tunnel, then the still-in-use Allegheny Mountain Tunnel in a relatively unpopulated section of South Central Pennsylvania, and then an indirect connection with I-99 in Bedford. The highway also passes through a wind farm in Somerset County[4] and is the closest Interstate highway to the 9/11 Flight 93 National Memorial in Shanksville. 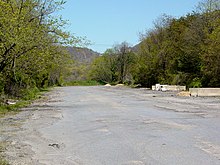 An abandoned portion of I-76 near mile marker 161 in Breezewood, Pennsylvania

At Breezewood, I-70 exits the turnpike (making use of a short stretch of the old alignment of the Pennsylvania Turnpike), while I-76 bypasses the Rays Hill and Sideling Hill tunnels along a new alignment built in the 1960s. I-76 also bypasses Harrisburg and Reading both to the south. The major features of this section are more mountains with the Tuscarora Mountain Tunnel and then a double tunnel (Kittatinny/Blue Mountain) prior to PA 997 near Shippensburg. I-76 intersects I-81 (indirectly) in Carlisle, Pennsylvania, then I-83 and I-283 near Harrisburg. The Susquehanna River Bridge is a new six lane bridge that was constructed in 2003 using precast segments that replaced an older bridge across the Susquehanna River.[5] At Valley Forge, I-76 diverges towards Philadelphia, but the turnpike (as I-276) bypasses it to the north. 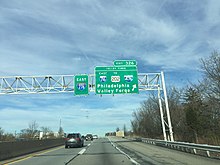 Eastbound at the Valley Forge interchange, where I-76 splits onto the Schuylkill Expressway and the road becomes I-276 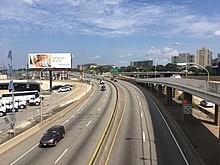 The last interchange before the Walt Whitman Bridge over the Delaware River into New Jersey is with I-95. Some of the ramps involve traffic signals, as the ramps to I-95 were retrofitted into an existing interchange when I-95 was built, and the toll booth for the bridge lies west of the crossing of the two roads. 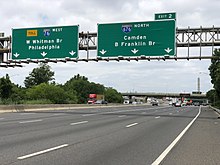 I-76 westbound at the interchange with I-676 in Camden, New Jersey

Just after crossing the Delaware River on the Walt Whitman Bridge, I-76 turns south and becomes the North–South Freeway, which carries I-676 north to Downtown Camden; the unsigned Route 76C connector runs east to US 130 and Route 168. The exit numbers in New Jersey are backwards, running from east to west. Though signed eastbound towards Atlantic City, the route ends near Gloucester City in western Camden County at an interchange with I-295.

I-76 eastbound in Gloucester City, just west of its terminus at I-295 and Route 42 in Bellmawr

From the exit for I-676 to the end, I-76 originally had local and express lanes in both directions, however, the barriers in both directions have been removed due to rebuilding of the I-295, I-76, and Route 42 interchange. I-76 ends at an interchange with I-295 on the Mount Ephraim–Bellmawr town line. The road becomes Route 42, continuing south on the North–South Freeway and then feeding into the Atlantic City Expressway to Atlantic City. While the South Jersey Transportation Authority (which owns the ACE) is not against the idea of making Route 42 (expressway part) and the ACE an eastern extension of I-76, they feel that making the change without a compelling reason would only add to motorists' confusion in southern New Jersey.[1]

The majority of I-76, along the Pennsylvania Turnpike, includes the first long-distance rural freeway in the U.S.; the Ohio Turnpike and Schuylkill Expressway are also pre-Interstate freeways. By 1955, the section of that route from west of Youngstown to Downtown Philadelphia was included in the planned Interstate Highway System, as was present I-76 from west of Youngstown to Akron. (Some early plans called for a new freeway along SR 14 to the Pennsylvania state line; it is unclear when the proposed route was shifted to the turnpikes.)

Current and once-planned Interstates near Cleveland; I-80 would have run via Akron, using what is now I-76 east of Akron

However, the 1957 numbering was drawn on a map from 1947, which did not include several changes that had been approved, specifically the Keystone Shortway across Pennsylvania. (The route in that corridor ran further north, along US 6, and was numbered I-84.) Thus, the final numbering, approved in 1958, assigned I-80 to the Norwalk-Youngstown route to reach the Keystone Shortway. The former alignment through Cleveland became I-80N; the turnpike was still not assigned a number from near Elyria (where I-80N and I-90 would split from it) to west of Youngstown. The route from west of Youngstown to Philadelphia was assigned Interstate 80S, and extended east to I-295 in New Jersey when the three-digit Interstates were assigned in 1959. (The planned I-80N in Pennsylvania became I-78.) Initial spurs of I-80S were I-180 (now I-176), I-280 (now I-276), I-480 (now I-476) and I-680 (now I-676, though it swapped with I-76 in 1972). 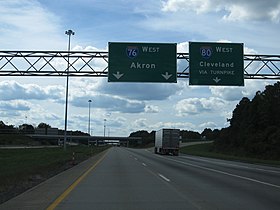 I-80 was realigned in Ohio by 1962, largely taking over former I-80N, which ran through Cleveland, joining the turnpike southwest of Cleveland. However, while I-80N was planned to split from I-80 near Kent and run northwest to Cleveland along SR 14, the new alignment of I-80 used the turnpike between the crossing west of Youngstown and the crossing with SR 14 at Streetsboro. The former I-80 from near Youngstown west to Akron became part of I-80S, as did a new alignment (already built as US 224) from Akron west to I-71 east of Lodi; the rest of proposed I-80 west to near Norwalk (which would have crossed I-71 near Medina) was removed from the Interstate Highway System. Ca. 1971, I-80 was moved to the Turnpike between Streetsboro and southwest of Cleveland; the old route became I-480.

On April 16, 1963, due in part to the extension of I-79 south from the Pittsburgh area, Pennsylvania proposed a partial renumbering. A new number, tentatively designated I-76, would run from Downtown Pittsburgh east on what was then I-70 (I-70S bypassed Pittsburgh to the south on what is now I-70) to the Pennsylvania Turnpike at Monroeville, and then east along the remainder of I-80S to I-295. I-80S would remain on the section of turnpikes from west of Youngstown to Monroeville. This was approved February 26, 1964, and included the renumbering of all X80 spurs to X76.

On August 29, 1972, a swap of I-76 and I-676 in Philadelphia and Camden was approved. I-76 had been routed along the Vine Street Expressway and Ben Franklin Bridge (now I-676) through Downtown Philadelphia, while I-676 used the Schuylkill Expressway and Walt Whitman Bridge to bypass downtown to the south. The switch was made because of delays in building the Vine Street Expressway, better interchange geometry at the splits, and that the Ben Franklin Bridge ends in city streets, rather than in expressway grade.

The renumbering of a Philadelphia Interstate to 76 in the years leading up to the Bicentennial Celebration of the 1776 signing in Philadelphia of the Declaration of Independence gives rise to the question of the highway number being an intentional tribute to the Spirit of '76. USDoT research into federal documentation of the I-76 renumbering found no evidence of this being intentional.[6]

In Ohio and Pennsylvania, the routes are composed mostly of turnpikes with the exceptions in east-central Ohio and eastern Pennsylvania. The exit numbers on the turnpike portions in Ohio follow the mileage markers for the Ohio Turnpike.

The entire route is in Camden County.

As Philadelphia and Pittsburgh lie on the I-76 corridor, these three sports rivalries are considered the I-76 Rivalry, and are also known as "The Battle of Pennsylvania" and "The Keystone State Rivalry":