For other uses, see Isthmus (disambiguation).

An isthmus ( /ˈɪsθməs/ or /ˈɪsməs/;[1] plural: isthmuses or isthmi; from Ancient Greek: ἰσθμός, romanized: isthmós, lit. 'neck')[2] is a narrow piece of land connecting two larger areas across an expanse of water by which they are otherwise separated.[3] A tombolo is an isthmus that consists of a spit or bar, and a strait is the sea counterpart of an isthmus. 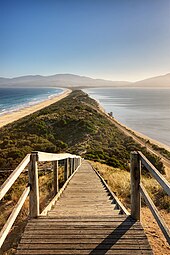 The sandy isthmus or tombolo "The Neck" connecting North and South Bruny Island in Tasmania, Australia

Canals are often built across isthmuses, where they may be a particularly advantageous shortcut for marine transport. For example, the Panama Canal crosses the Isthmus of Panama, connecting the North Atlantic and Pacific Oceans; the Suez Canal connects the Mediterranean Sea and the Red Sea, cutting across the western side of the Isthmus of Suez, formed by the Sinai Peninsula; and the Crinan Canal crosses the isthmus between Loch Crinan and Loch Gilp, which connects the Kintyre peninsula with the rest of Scotland. Another example is the Welland Canal in the Niagara Peninsula (technically an isthmus). It connects Lake Ontario to Lake Erie. The city of Auckland in the North Island of New Zealand is situated on an isthmus.

Isthmus vs land bridge vs peninsula

Isthmus and land bridge are related terms with isthmus having a broader meaning. A land bridge is an isthmus connecting the Earth's major landmasses. The term land bridge is usually used in biogeology to describe land connections that used to exist between continents at various times and were important for migration of people, and various species of animals and plants, e.g. Bering Land Bridge and Doggerland.[4]

An isthmus is a land connection between two bigger landmasses, while a peninsula is rather a land protrusion which is connected to a bigger landmass on one side only and surrounded by water on all other sides. Technically, an isthmus can have canals running from coast to coast (e.g. the Panama Canal), and thus resemble two peninsulas; however, canals are artificial features distinguished from straits. 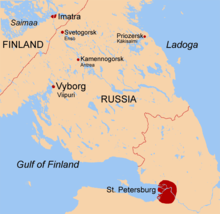 Karelian Isthmus in Russia, which lies between the Gulf of Finland and Lake Ladoga 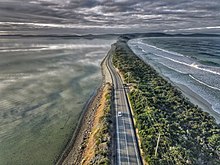 Aerial perspective of the isthmus of Bruny Island