The small town of Karitane is located within the limits of the city of Dunedin in New Zealand, 35 kilometres to the north of the city centre.

Set in rolling country near the mouth of the Waikouaiti River, the town is a popular holiday retreat for Dunedinites.

Waikouaiti River estuary at Karitane; fishing wharf and channel to the Pacific Ocean at right, Matanaka headland at left background.

The site of the present settlement of Karitane includes that of the pre-European Māori kaik, or undefended village. Giant moas were likely to be hunted in the area.[2]

It encompasses Huriawa on the adjacent peninsula, a pā or fortified village, recalled in oral tradition for sieges in the late 17th or early 18th centuries. It was also the site of the whaling station set up by Long, Wright and Richards in 1837. That was known as Waikouaiti, but the name later became transferred to the present township of that name established by Johnny Jones as a farming settlement in 1840, on the north side of the estuary.

In 1838 Jones acquired the Karitane whaling station, primarily targeting southern rights and humpbacks, resulting in severe depletion of local populations for these species. After sending pioneers to start his farming settlement he sent a Wesleyan missionary to join them in May 1840. Rev. James Watkin established the first mission station in the South Island.[3] The first Christian service in the South Island took place in Karitane on 17 May, 1840. Watkin set up his mission station at Karitane. He was living there with his wife and children in a purpose-built house by late 1842. In 1867 George O'Brien painted a memorable view looking north from the Karitane waterfront, now in the Otago Settlers Museum, Dunedin.

Karitane Nurses are also mentioned in the Australian Television Miniseries Paper Giants: The Birth of Cleo, suggesting their influence had spread to Australia by the 1970s.

In early February 2021, high levels of lead (40 times the acceptable level of 0.01mg/L) were detected in Karitane and nearby Waikouaiti's drinking water. The high levels of lead were first detected on 18 December 2020 but the alert was emailed to a Dunedin City Council staff member who was on holiday.[4][5] In response, Director-General of Health Ashley Bloomfield offered free blood tests to Karitane and Waikouaiti residents. The Dunedin City Council also dispatched water tanks and staff to assist and reassure local residents.[5] Prime Minister Jacinda Ardern described the lead levels in Karitane and Waikouaiti as "unacceptable."[6] On 9 February, the City Council distributed free fruits and vegetables to residents of Karitane, Waikouaiti, and Hawksbury due to concerns about eating crops irrigated with the contaminated water.[7] On 11 February, the Dunedin City Council also confirmed that it would drain a raw water reservoir and replace 5 kilometers of old pipes in order to reassure local residents.[8] By 10 March, the Southern District Health Board confirmed that 1,512 people had been tested, with blood test results indicating that nobody had a blood lead level requiring hospitalisation and that long term exposure to lead from the water supply was limited.[9]

The name Karitane is often associated with pioneering paediatrician and psychiatrist Sir Truby King, founder of the Plunket Society. The name is echoed in many New Zealand child-related services and products: 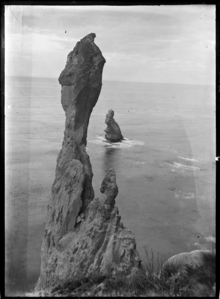 Photograph of rock formations near Puketeraki by Albert Percy Godber

Huirapa Marae, also known as Puketeraki Marae, is located in Karitāne. It is a marae (meeting ground) of Ngāi Tahu, including the Kāti Huirapa Rūnanga Ki Puketeraki branch, and includes the Karitāne wharenui (meeting house).[15][16]

Close to the settlement is the site of Huriawa Pā, which was a major pā (fortification) in pre-European New Zealand. It was set in a strong position on a rocky promontory above the coast.