King's High School is a state single-sex boys' secondary school in Dunedin, New Zealand. It is located at the southern end of the city close to the boundary between the suburbs of South Dunedin, St. Clair and Forbury, next to the parallel single-sex girls' school, Queen's High School. Both schools share several facilities, including the multimillion-dollar Performing Arts Centre which opened in 2006. The school first opened in 1936, and held its 75th anniversary in late 2010.

In 2011, the school had the highest National Certificate of Educational Achievement (NCEA) pass rates for state boys' schools in New Zealand.[4] Among the results, the level one score averaged at 93.4% (a significant increase from 71% in 2008). In 2017, NCEA pass rates continued to be above the national average, with NCEA Level One averaging 96.6%, and Level Three averaging 90.0%.[5]

King's had 722 pupils in 2007, growing to 1,008 pupils in 2014, the highest roll in King's 78-year history. The size of the roll also meant that King's became the largest school in the Otago region, overtaking Taieri College in the process.[6] Since then, student numbers have remained steady, measuring 1,041 students in 2018.[7]

King's High School was re-built across almost a decade in the mid-1990s. The school has separate sports facilities, a purpose-built catering suite and performing arts centre. The school also has a camp and classroom off-site in Warrington, north of Dunedin, which students in year nine visit for their school camp.

In 2006, King's High School (along with Queen's) added a multimillion-dollar performing arts centre, with a capacity of almost 500. The facility is used by both schools, and the surrounding community. In 2010, renovations were made to the schools gymnasium. Later in 2018, renovations took place in the art department with plans for additional upgrading.[citation needed]

New students to King's are placed into one of four houses – Tudor, Windsor, Stuart or Hanover, based on the Historic English royal houses.[8] Throughout the year, juniors and seniors compete in many sports, cultural and performance based activities. In term four, the house with the most points wins the 'House shield'. Some events include: rugby sevens, football, basketball, athletics, cross country, softball, singing, haka competition, debating and chess. Athletics, Cross Country, Singing and the haka competition are all full school, compulsory events worth double house points. All other interhouse events are optional and done at lunchtime. 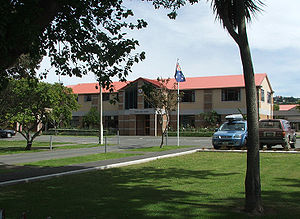