Lakeville /ˈleɪkvɪl/ is the largest city in Dakota County, Minnesota, United States. It is a suburb of Minneapolis-Saint Paul, approximately 20 miles (32 km) south of both downtown Minneapolis and downtown St. Paul[5] along Interstate Highway 35. Lakeville is one of the fastest-growing cities in the Twin Cities area.[6] The U.S. Census Bureau estimated its population to be 67,317 in 2019.[7][8]

Lakeville first became notable in 1910 when Marion Savage built the Dan Patch Railroad Line to service his Antlers Amusement Park.[9] It later became a flourishing milling center; its agriculture industry is still in operation. While many of Lakeville's workers commute northward to Minneapolis, Saint Paul, and more central suburbs like Bloomington, Lakeville has had major industry since the 1960s—including the Airlake Industrial Park, which is served by Airlake Airport, a regional reliever airport.

The Sioux people ceded most of southern Minnesota in the Treaty of Traverse des Sioux in 1851. A military road was constructed between Fort Snelling and the southern forts.[which?] In 1855, J.J. Brackett, a Saint Paul lumber baron and mail carrier using the road, decided to plat a site halfway between Saint Paul and Saint Peter on a lake he named Prairie Lake. The village was established as Lakeville Township in 1858.[10] Notoriety came when Colonel Marion Savage expanded his entertainment business into constructing Antlers Amusement Park in 1910. Riding on fame from his success with the Dan Patch racing horse and the popularity of the park, the lake was renamed Lake Marion, and the rail line servicing the park named the Dan Patch Railroad Line.[11]

With the mostly rural landscape, early settlers were farmers and this owed to a high percentage of Scandinavians. The other group included Irish, Scots, and English who had spread out from Hamilton Landing and Burnsville. In Karen Miller's diary from 1840 to 1895, Danes reportedly outnumbered Norwegians and travel to Minneapolis was not uncommon for the rural township.[12] Enggren's Grocery was a downtown staple since 1900 until it closed in 2006.[13]

The later 20th century followed typically for the outer-ring suburban Twin Cities with official incorporation as the City of Lakeville in 1967. The agriculture industry continued to sustain itself as postwar development did not immediately absorb Lakeville (as well as Interstate 35's later completion date). In the early 21st century, housing and population increases were due to rising land costs in the metropolitan area, causing Lakeville to become a boomtown.[citation needed]

According to the United States Census Bureau, the city has a total area of 37.83 square miles (97.98 km2), of which 36.06 square miles (93.39 km2) is land and 1.77 square miles (4.58 km2) is water.[14] Lakeville includes the Argonne Farms post-World War I settlement project which failed in the early 20th century and was redeveloped in the 21st century into typical suburban retail. Since it was a semi-autonomous village within Lakeville Township before the city's incorporation, it continues to appear today on maps as Argonne.[15]

As its name implies, Lakeville contains several lakes as well as smaller ponds and wetlands within its borders. The two largest lakes are Lake Marion and Orchard Lake, which are used heavily for recreation such as fishing, boating, and swimming. Smaller named natural lakes include East Lake, Kingsley Lake, Lee Lake and Raven Lake. Valley Lake is a small man-made lake in the northern part of the city.

There were 18,683 households, of which 49.1% had children under the age of 18 living with them, 67.9% were married couples living together, 9.2% had a female householder with no husband present, 4.0% had a male householder with no wife present, and 18.9% were non-families. 14.0% of all households were made up of individuals, and 3.6% had someone living alone who was 65 years of age or older. The average household size was 2.99 and the average family size was 3.32.

Airlake Industrial Park, developed by Maynard Johnson with colleagues at Bloomington-based Hitchcock Industries, is home to as many as 200 companies and an estimated 4,500 employees. The 1,500-acre park, one of the state's largest contiguous industrial parks, has attracted companies ranging from start-ups to large corporations.[20]

Airlake Industrial Park was a contrived name – “air” represented the airport that Hitchcock Industries built on the grounds and “lake” signified nearby Lake Marion.[21]

Lakeville is served by the Airlake Airport, which has a single runway with an ILS approach. The airport is managed by the Metropolitan Airports Commission as a reliever facility to draw general aviation traffic. The FAA operates the Minneapolis ARTCC (air route traffic control center) in Farmington, several miles away from the airport. This center provides traffic control services for Minnesota and surrounding states.

Large farms are still in operation, producing most of their revenue in corn, soybeans, and dairy cattle.

Post Consumer Brands has had its headquarters in Lakeville since 2015. 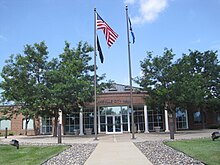 The Lakeville city hall in summer

The city of Lakeville is governed by a five-member city council, including a mayor, although a City Administrator runs day-to-day municipal operations. A professional police force and volunteer fire department protect the city's residents. The city operates a large parks department which includes a senior center, an entertainment center, dozens of various neighborhood and community parks, and many miles of multipurpose trails.

Lakeville is directly served by Interstate 35, as well as Cedar Avenue/MN 77 to the east.

Before its abandonment in 1970, the Chicago, Milwaukee, St. Paul and Pacific Railroad's Hastings & Dakota Subdivision went through the center of Lakeville and served various industries. Short-line railroad Progressive Rail is based in Lakeville, and owns the right-of-way of the MN&S Subdivision between Lakeville and Northfield. Between Lakeville and Savage the MN&S Subdivision is owned by Canadian Pacific Railway, but has been out of service since the 1990s. In 2009 Progressive Rail began using a segment of the out-of-service tracks for railcar storage, causing local controversy. The Dan Patch Corridor would go through Lakeville, but has been banned from discussion and funding by the Minnesota State Legislature since 2002. The City of Lakeville opposes public funding of a passenger rail line on the MN&S Subdivision through the community.[46]