Les Tuniques Bleues (Dutch: De Blauwbloezen) is a Belgian series of bandes dessinées (comic books in the Franco-Belgian tradition), first published in Spirou magazine and later collected in albums by Dupuis.[1] Created by artist Louis Salvérius and writer Raoul Cauvin, the series was taken up by artist Willy Lambillotte after Salverius' death. It follows two United States cavalrymen through a series of battles and adventures. The first album of the series was published in 1970. The series' name, Les Tuniques Bleues, literally "the bluecoats", refers to the Northern (union) army during the American Civil War. Cinebook has started to print the comics in English as "The Bluecoats" releasing Robertsonville Prison in 2008. It is one of the best-selling series in French-language comics. 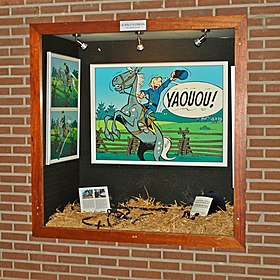 Cauvin has written the stories for all the volumes thus far. The first book, Un chariot dans l'Ouest (French for "A Wagon in the West"), was published in 1972. The 63nd book in the series, La bataille du Cratère, was published in 2019.[2] Cauvin retired from writing the series in 2020 the reins being taken over by Jose Luis Munuera and the Beka writing partnership. Their album L'envoyé spécial will be published (out of sequence) as volume 65, with volume 64 by Cavin and Lampil being published in 2021.[3]

Six of the first ten volumes were illustrated by Louis Salverius, with Lambil taking over after Salverius' death.

The stories appear first in Spirou, before being published as an album. The French editions are published by Dupuis. New albums are among the top ten best selling comics in French each year, with 184,800 copies for the 50th album alone in 2006.[4] Les Tuniques Bleues spawned a 1989 computer game called North and South.

The original setting was the frontier of the Old West, where the main characters were American cavalrymen. Those stories, rarely longer than a single page, were comedic adventures about popular Western stereotypes and the absurdity of military life. One recurring feature was the blunder that led to the Cavalry fort being besieged by outraged Native Americans, or in one case, the cavalry having to besiege their own fort after the Indians have tricked them into leaving it and taken over. As the series progressed, the stories became longer and more involved, retaining their humorous highlights. The drawing style also changed, after the death of the original artist Salverius, from overtly cartoonish to semi-realistic.

In the second album, Du Nord au Sud, the main characters, Blutch and Chesterfield, travel east to join Ulysses S. Grant's army and fight in the American Civil War.[1] The 18th album, Blue Retro, describes how the characters were first drafted into the military when the war had already begun and makes no mention of the time they spent on the frontier, contradicting the events in album 2 and others. This retconned origin and continuity hiccups are not detrimental to the enjoyment and understanding of the series since each album is a stand-alone adventure or collection of short stories. Adventures at the frontier fort still occasionally take place.

The two main protagonists are colorful and clashing opposites. Corporal Blutch is a reluctant soldier, highly critical of authority, whose only wish is to get out of the army and return to civilian life, often threatening to desert and coming up with ways to avoid going into yet another senseless battle. Blutch does have a heroic side and will not hesitate to fight against the Confederate troops even to the risk of his own life. Sergeant Cornelius Chesterfield is by contrast a devoted and obedient career soldier, always determined that he and Blutch should be in the thick of the action. He is proud of his scars and dreams of military glory. Though strong and brave to the point of recklessness, he is clumsy and narrow-minded, unable to clearly perceive the madness of the war around him. Though their relationship is often antagonistic, they are comrades for life and have saved each other's lives many times in spite of repeated threats made by both of doing the other in.

Other recurring characters include the somewhat insane, charge-obsessed Captain Stark and the bumbling general staff, headed by the anger-prone General Alexander. Historic figures are also occasionally present in the narrative: alongside General Grant, they include President Abraham Lincoln, Confederate commander Robert E. Lee, and war photographer Mathew Brady. As happens in fiction, especially in bandes dessinées, Blutch and Chesterfield often get sent on special missions which take them all over the map, from Mexico to Canada, and mix them up in projects from railroad construction to spying on the Confederacy's secret submarine project (based on the actual CSS David). Many albums are built around historical events or characters such as Chinese immigrant labor, the treatment of African American soldiers, Charleston's submarines, and General Lee's horse Traveller. Chesterfield even goes undercover to confront guerrilla leader William Quantrill and his henchmen Jesse and Frank James. On another occasion they had to contend with a racist officer, Captain Nepel, based on the French politician Jean-Marie Le Pen.

Historical details are generally quite exact, and accuracy has steadily improved over the years. Yet the series is first and foremost entertainment and historic details are altered to suit the story. The serious drama of the plots is balanced by frequent humorous incidents and Blutch's constant sarcastic wisecracks. Although this is not strictly speaking an adult-oriented bande dessinée, the authors are not afraid of showing the reality of war in a harsh, but tactful manner, such as dead bodies in the aftermath of a battle. Military authority, especially the uncaring and/or incompetent leader is often the subject of parody and derision.

Several albums highlight historical facts of the American Civil War, other adventures are set in a place or anonymous battle. Some accounts tell of an encounter with a Native American tribe without any relation to the American Civil War. However, the chronology of the albums does not follow that of the war, but several albums are in flashback, tracing the past of the two protagonists, possibly narrated by one of them (Bull Run) or another character (Vertes Années).

Cinebook Ltd has started publishing English translations from 2008, as "The Bluecoats". Ten books have been published to date.

Les Tuniques Bleues was made into a video game named North & South in 1989 by Infogrames. In 2012, this game was adapted by Anuman Interactive as a multiplayer game.[5]

Les Tuniques Bleues are among the many Belgian comics characters to jokingly have a Brussels street named after them. The Rue des Comédiens/ Komediantenstraat has a commemorative plaque with the name Rue des Tuniques Bleues/ Blauwbloezenstraat placed under the actual street sign.[6]