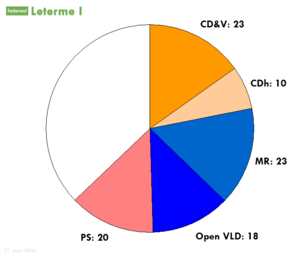 The government received the confidence of the Chamber of Representatives on 22 March 2008, with 97 votes in favour, 48 against, and one abstaining.[3]

It was succeeded by a government led by CD&V member Herman Van Rompuy on 30 December 2008.[4]

The Leterme I Government comprised 15 ministers and seven secretaries of state.[2] Its final composition was as follows:[5]

In the late hours of 14 July 2008, after months of negotiations regarding constitutional reform and the status of the Brussels-Halle-Vilvoorde electoral district failed, and the deadline of 15 July 2008 neared without the hope of a result, Leterme offered the resignation of his cabinet to the king. After a series of consultations, King Albert II decided to reject Prime Minister Leterme's resignation on 17 July. The royal palace said that the King had asked two senior French-speaking politicians, François-Xavier de Donnéa (MR) and Raymond Langendries (CDH), and the Minister-President of the German-speaking Community, Karl-Heinz Lambertz (SP), to establish how to start talks about institutional reform. They were expected to report back to the king by the end of the month.[6] However, on 31 July 2008, they reported that they needed more time for the negotiations.

On 19 December 2008, Yves Leterme offered the resignation of his government to King Albert after a crisis surrounding the sale of Fortis to BNP Paribas erupted.[7] Leterme, Jo Vandeurzen, and Didier Reynders were accused of violating the separation of powers by trying to influence the court of appeal and of exerting improper influence by the First Chairman of the Court of Cassation.[8] Three days later the resignation was accepted by the king.