The Liri Blues Festival, founded in 1988, is one of the main blues music festivals in Italy. It takes place every year in July near Rome in Isola del Liri, a small town twinned with the city of New Orleans since 1997.[1]

The Liri Blues Festival, known as "Liri Blues", has been taking place since 1988 in Isola del Liri, a small Italian town famous for its waterfall, which is 90 feet (28 m) high and situated in the centre.[2] The festival is a free, annual event and usually occurs during the month of July. Concerts are held in the main square (Piazza Boncompagni), in the streets and jam sessions happen late at night.

Following its initial success in the first few years, the Liri Blues Festival was shared with neighbouring towns, in particular Ferentino and Veroli. However, since the early years of the 21st century, Isola del Liri is once again the central location for the festival. Boncompagni Square plays host to the main events just as it did for the very first gig in 1988.

A winter session of the festival was briefly introduced in the early part of the century (“Liri Blues Winter”) and saw performing some famous Italian bluesmen such as Roberto Ciotti, Fabio Treves and Paolo Bonfanti.

The festival, organised by Duke & Bird, has always counted on the important help of volunteers and blues connoisseurs like Mario Insenga (Blue Stuff), who has been a supporter of Liri Blues ever since its initial formation.

When the first annual festival took place in 1988, Isola del Liri had been seeing its paper mills close one after the other. For more than 100 years these factories had provided work for the local population. The first three evenings of this festival symbolised an attempt to overcome years of deep industrial crisis.

The festival was created thanks to Luciano Duro, who managed to bring big international bluesmen to a small town in central Italy.

In the 1990s the festival gradually opened to different genres and influences. Musicians such as Jorma Kaukonen of Jefferson Airplane, Canned Heat, Art Ensemble of Chicago, Pentangle, Fairport Convention, Elliott Murphy, and The Fleshtones played in Isola del Liri. The latter, after the concert had finished, gave another encore from their hotel room just behind the stage!

The festival was organized by Jazz'n'Arts until its tenth year; management then changed over to Duke & Bird. The festival grew, and more dates in neighbouring towns were added, such as Ferentino for jazz concerts (Mike Stern, Yellowjackets) and Veroli for gospel and soul (Shemekia Copeland, The Soul Stirrers). Isola del Liri, however, remained the heart of Liri Blues, with artists the likes of Bo Diddley, R. L. Burnside and Honeyboy Edwards performing in the main square.

By the end of the century the festival covered a period of eleven days throughout the province.

Signing of the twinning between the communities of Isola del Liri and New Orleans (New Orleans, January 7, 1997).

On January 7, 1997, for the tenth annual Liri Blues, the then mayor of Isola del Liri and the initiator of the festival went to Louisiana to sign the twinning between the two towns[1] and to receive the freedom of the city of New Orleans.

— Marc. H. Morial, ex-mayor of New Orleans, thanking the then mayor of Isola del Liri after the twinning between the two towns - January 31st, 1997

The celebrations of the twinning continued in Isola del Liri, where the clarinettist Alvin Batiste, who once taught Branford Marsalis, gave a concert involving musicians from Isola and New Orleans.

Batiste performed, among others, a jazz song called Isola del Liri, conceived for the occasion, he later included it in the album Songs, Words and Messages, Connections.[3]

As a token of their strong relationship over the years, Liri Blues was instrumental in helping the musicians of New Orleans following the devastation caused by hurricane Katrina in August 2005. On November 9 a charity concert (the "New Orleans Day") was organized. Corey Harris (protagonist of Scorsese's Feel Like Going Home) and a few other groups performed.[4]

In 2001 there was a memorable performance by John Mayall, Isola del Liri went back to being the central location for the festival. In the following three years the location changed to SS. Triade Square and then came back to the original Boncompagni Square.

In 2002 RAI Radio 1, the main Italian public radio station, started to follow the whole festival. They transmitted live recordings (such as the concert of Robben Ford)[5] and interviews with Roy Rogers and others, through their programme Radioscrigno. The collaboration with RAI has continued ever since.[6][7][8]

In 2007 the festival celebrated 20 years of concerts and 10 years of twinning with New Orleans. In a courageous project, Piccola Orchestra La Viola and Dr. Sunflower, an orchestra of squeeze boxes and a jug band, played traditional blues from Louisiana. The CD Tribute to New Orleans,[9] recorded live at Liri Blues 2006, was presented. Willy DeVille[10] and Charlie Musselwhite performed.

Dr. John closed the 2010 festival, cementing the permanent link between the small Italian town and the capital of Louisiana. 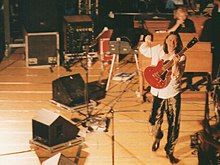 Liri Blues and Isola del Liri have become very attached to Louisiana and in particular to the twin city New Orleans. Various artists who have performed at the festival, like Dr. John, Alvin Batiste, Rockin' Dopsie, C. J. Chenier and Zachary Richard[11] with his zydeco style, have been and still are ambassadors of the music of Louisiana throughout the world.

As a rule, however, the bluesmen from the U.S. have been the main protagonists, with leading figures like Dr. John, Jimmy Smith, Charlie Musselwhite and more modern artists like Scott Henderson, Robben Ford and Eric Bibb.

European musicians have also been prominent, especially English performers like Paul Lamb,[12] John Martyn and Robin Trower. British Blues in general has been represented by the likes of John Mayall & the Bluesbreakers, Mick Taylor and Eric Burdon[13] and The Animals.

In the more recent years there have been traditional bluesmen like Al Kooper[14] and Taj Mahal, original characters like Otis Taylor, Maceo Parker, Colosseum and skillful guitarists like Sonny Landreth, Derek Trucks and Albert Lee.

Some of the artists who have performed at Liri Blues since 1988 include:

Albums recorded at the festival