The word "city" took on two meanings in New Zealand after the local government reforms of 1989. Before the reforms, a borough that had a population of 20,000 or more could be proclaimed a city.[1] The boundaries of councils tended to follow the edge of the built-up area, so there was little difference between the urban area and the local government area.

In 1989, the structure of local government in New Zealand was significantly reorganised. Almost all the new district councils and city councils were much larger in land area, and they covered both urban land and the surrounding rural land. Many locations that once had a "city council" are now governed by a "district council".

Today an urban area must have at least 50,000 residents to be proclaimed a city.[2]

Population based on 2018 standard

Statistics New Zealand creates standards for statistical geographic areas that are the basis for determining population figures. Statistics New Zealand announced in 2017 that the Statistical Standard for Geographic Areas 2018 (SSGA18) would replace the New Zealand Standard Areas Classification 1992 (NZSAC92). The change impacted Wellington most, by splitting it into four urban areas, being the Wellington city and Lower Hutt city "major urban areas" and Porirua and Upper Hutt "large urban areas". Wellington as defined by Statistics New Zealand approximately halved in size, and Lower Hutt entered the city rankings in sixth place between Tauranga and Dunedin.[3] Many satellite towns that had been included within a larger NZSAC92 urban area became urban areas in their own right under SSGA18, with Hibiscus Coast being split from Auckland and joining the list of large urban areas. Napier-Hastings was also split into its constituent cities and towns rather than being one combined urban area. 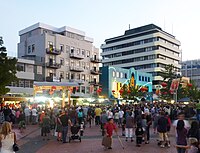 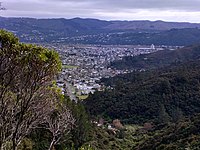 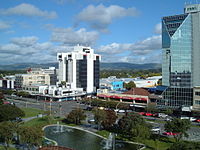 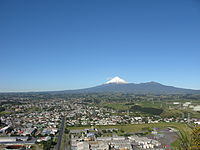 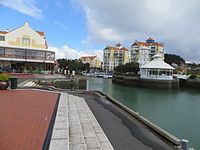 Gulf Harbour on the Hibiscus Coast 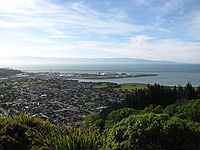 from Wellington, New Zealand, CC BY 2.0 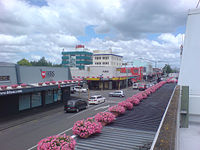 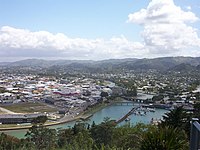 Population based on 1992 standard

Until the end of 2017, the standard devised in 1991 that applied was the New Zealand Standard Areas Classification 1992.[3] The populations given in the table below are provisional June 2018[6] New Zealand resident populations and they refer to the entire urban area as defined in NZSAC92.

The populations given are the latest (June 2018)[6] Statistics New Zealand estimated resident populations.

Many cities were reorganised into districts by the Local Government Commission in 1989 under the Local Government Act 1974, for example Timaru. Other urban areas that are no longer cities, such as Rotorua and Whangārei, have higher populations than some present cities. The most recently proclaimed city is Tauranga, which became a city, for the second time, from 1 March 2004. Christchurch (1862 and 1868) and Invercargill (1930 and 1991) have also been declared cities more than once.

Under Section 27 of the Local Government Act 2002, a district may become a city by either a "reorganisation scheme" with the Local Government Commission, or under Section 27(1) it may apply for a change in status under Schedule 3, Clause 7. The new city must have "a population of not less than 50,000 persons", be "predominantly urban" and "a distinct entity and a major centre of activity within the region" (or regions) that it is encompassed by. Existing cities are grandfathered under Schedule 2, Part 2 of the Act. The only new city council so far under this section is the Tauranga City Council, from 1 March 2004.

Previously, under Section 37L of the Local Government Act 1974, new cities could only be formed from a "reorganisation scheme". The same criteria were used. The last city to be constituted under this section was Invercargill, which was re-reorganised into a city in 1991.

that which did not change the name [2]

During provincialism in New Zealand, from 1852 until abolition in 1876, there was no uniform system of local authorities in New Zealand. There is thus some argument over which of the following cities was the first.

The Municipal Corporations Act 1876 included the first schedule of cities, with the dates they were constituted. Dunedin was the first city in New Zealand to be described in an Act of Parliament as 'City of...', something now automatic under the Local Government Act 2002.

Up to October 1989, the Local Government Commission under took reorganisations of local government. As a result, some cities were reorganised into other larger cities or changed to districts, and some of these areas are still considered cities by many New Zealanders. This is a list as at circa 1986.