The catalog of minor planets is published by the Minor Planet Center and contains more than half a million entries, including 134340 Pluto.[1] For an overview, see index. 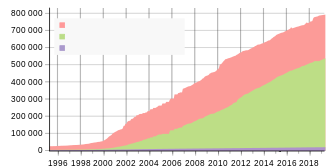 Growing number of minor planets since 1995:

The catalog's first object is 1 Ceres, discovered by Giuseppe Piazzi in 1801, while its best-known entry is Pluto, listed as 134340 Pluto. The vast majority (97%) of minor planets are asteroids from the asteroid belt (the catalog uses a color code to indicate a body's dynamical classification). There are more than a thousand different minor-planet discoverers observing from a growing list of registered observatories. In terms of numbers, the most prolific discoverers are Spacewatch, LINEAR, MLS, NEAT and CSS. There are also 22,671 named minor planets mostly after people, places and figures from mythology and fiction,[4][5] which account for only 4.00% of all numbered catalog entries. (4596) 1981 QB and 560354 Chrisnolan are currently the lowest-numbered unnamed and highest-numbered named minor planets, respectively.[1][5]

It is expected that the upcoming survey by the Vera C. Rubin Observatory (LSST) will discover another 5 million minor planets during the next ten years—a tenfold increase from current numbers.[6] While all main-belt asteroids with a diameter above 10 kilometers have already been discovered, there might be as many as 10 trillion 1-meter-sized asteroids or larger out to the orbit of Jupiter; and more than a trillion minor planets in the Kuiper belt of which hundreds are likely dwarf planets.[6][7] For minor planets grouped by a particular aspect or property, see § Specific lists.

The list of minor planets consists of more than 500 partial lists, each containing 1000 minor planets grouped into 10 tables. The data is sourced from the Minor Planet Center (MPC) and expanded with data from the JPL SBDB (mean-diameter), Johnston's archive (sub-classification) and others (see detailed field descriptions below). For an overview of all existing partial lists, see § Main index.

The information given for a minor planet includes a permanent and provisional designation (§ Designation), a citation that links to the meanings of minor planet names (only if named), the discovery date, location, and credited discoverers (§ Discovery and § Discoverers), a category with a more refined classification than the principal grouping represented by the background color (§ Category), a mean-diameter, sourced from JPL's SBDB or otherwise calculated estimates in italics (§ Diameter), and a reference (Ref) to the corresponding pages at MPC and JPL SBDB.

The MPC may credit one or several astronomers, a survey or similar program, or even the observatory site with the discovery. In the first column of the table, an existing stand-alone article is linked in boldface, while (self-)redirects are never linked. Discoverers, discovery site and category are only linked if they differ from the preceding catalog entry.

The example above shows five catalog entries from one of the partial lists. All five asteroids were discovered at Palomar Observatory by the Palomar–Leiden survey (PLS). The MPC directly credits the survey's principle investigators, that is, the astronomers Cornelis van Houten, Ingrid van Houten-Groeneveld and Tom Gehrels. (This is the only instance where the list of minor planets diverges from the Discovery Circumstances in the official MPC list.[8]) 189004 Capys, discovered on 16 October 1977, is the only named minor planet. Its background color indicates that it is a Jupiter trojan (from the Trojan camp at Jupiter's L5), estimated to be approximately 12 kilometers in diameter. All other objects are smaller asteroids from the inner (white), central (light-grey) and outer regions (dark grey) of the asteroid belt. The provisional designation for all objects is an uncommon survey designation.

In modern times, a minor planet receives a sequential number only after it has been observed several times over at least 4 oppositions.[9] Minor planets whose orbits are not (yet) precisely known are known by their provisional designation. This rule was not necessarily followed in earlier times, and some bodies received a number but subsequently became lost minor planets. The 2000 recovery of 719 Albert, which had been lost for nearly 89 years, eliminated the last numbered lost asteroid.[10] Only after a number is assigned is the minor planet eligible to receive a name. Usually the discoverer has up to 10 years to pick a name; many minor planets now remain unnamed. Especially towards the end of the twentieth century, large-scale automated asteroid discovery programs such as LINEAR have increased the pace of discoveries so much that the vast majority of minor planets will most likely never receive names.

For these reasons, the sequence of numbers only approximately matches the timeline of discovery. In extreme cases, such as lost minor planets, there may be a considerable mismatch: for instance the high-numbered 69230 Hermes was originally discovered in 1937, but it was a lost until 2003. Only after it was rediscovered could its orbit be established and a number assigned.

The MPC credits more than 1000 professional and amateur astronomers as discoverers of minor planets. Many of them have discovered only a few minor planets or even just co-discovered a single one. Moreover, a discoverer does not need to be a human being. There are about 300 programs, surveys and observatories credited as discoverers. Among these, a small group of U.S. programs and surveys actually account for most of all discoveries made so far (see pie chart). As the total of numbered minor planets is growing by the tens of thousands every year, all statistical figures are constantly changing. In contrast to the Top 10 discoverers displayed in this articles, the MPC summarizes the total of discoveries somewhat differently, that is by a distinct group of discoverers. For example, bodies discovered in the Palomar–Leiden Survey are directly credited to the program's principal investigators.

In this catalog, minor planets are classified into one of 8 principal orbital groups and highlighted with a distinct color. These are:

The vast majority of minor planets are evenly distributed between the inner-, central and outer parts of the asteroid belt, which are separated by the two Kirkwood gaps at 2.5 and 2.82 AU. Nearly 97.5% of all minor planets are main-belt asteroids (MBA), while Jupiter trojans, Mars-crossing and near-Earth asteroids each account for 1% or less of the overall population. Only a small number of distant minor planets, that is the centaurs and trans-Neptunian objects, have been numbered so far. In the partial lists, table column "category" further refines this principal grouping:

If available, a minor planet's mean diameter in meters (m) or kilometers (km) is taken from the NEOWISE mission of NASA's Wide-field Infrared Survey Explorer, which the Small-Body Database has also adopted.[22] Mean diameters are rounded to two significant figures if smaller than 100 kilometers. Estimates are in italics and calculated from a magnitude-to-diameter conversion, using an assumed albedo derived from the body's orbital parameters or, if available, from a family-specific mean albedo (also see asteroid family table).[e]

This is an overview of all existing partial lists of numbered minor planets (LoMP). Each table stands for 100,000 minor planets, each cell for a specific partial list of 1,000 sequentially numbered bodies. The data is sourced from the Minor Planet Center.[1] For an introduction, see § top. 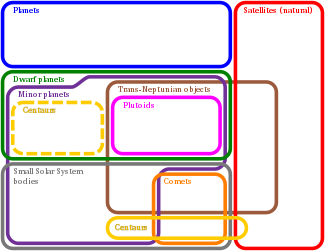