listen))[2] is a London borough in South London, England, which forms part of Inner London. Its name was recorded in 1062 as Lambehitha ("landing place for lambs") and in 1255 as Lambeth. The geographical centre of London is at Frazier Street near Lambeth North tube station,[3] though nearby Charing Cross on the other side of the Thames in the City of Westminster is traditionally considered the centre of London.[4]

For the borough's history from 1900 to 1965, see Metropolitan Borough of Lambeth.

Lambeth was part of the large ancient parish of Lambeth St Mary, the site of the archepiscopal Lambeth Palace, in the hundred of Brixton in the county of Surrey.[5] It was an elongated north–south parish with 2 miles (3.2 km) of River Thames frontage opposite the cities of London and Westminster. Lambeth became part of the Metropolitan Police District in 1829. It remained a parish for Poor Law purposes after the Poor Law Amendment Act 1834, and was governed by a vestry after the introduction of the Metropolitan Board of Works in 1855.[5]

In 1979, the administration of Edward ("Red Ted") Knight organised the borough's first public demonstration against the Thatcher government.[7][8] In 1985 Knight's Labour administration was subjected to rate-capping, with its budget restricted by the government. Knight and most of the Labour councillors protested by refusing to propose budgets. As a result of the protest, 32 councillors were ordered to repay interest lost by the council due to budgeting delays and were disqualified from office for five years.[7]

In 1991, Joan Twelves' administration failed to collect the poll tax and opposed the war in the Persian Gulf.[7][8] The following year, Twelves and 12 other councillors were suspended from the local Labour Party by regional officials for advocating non-payment of the poll tax and other ideas.[7][9] Twelves' deputy leader at this time was John Harrison.[10]

In the 2016 European Union referendum, Lambeth had the highest share of Remain votes in the United Kingdom at 78.62%, second to overseas territory Gibraltar's 95.9%.[11]

Lambeth is a long, thin borough, about 3 miles (4.8 km) wide and 7 miles (11 km) long. Brixton is its civic centre, and there are other town centres. The largest shopping areas are (in order of size) Streatham, Brixton, Vauxhall, Clapham and West Norwood.

In the northern part of the borough are the central London districts of the South Bank, Vauxhall and Lambeth; in the south are the suburbs of Gipsy Hill, Streatham, West Dulwich and West Norwood. In between are the developed and inner-city districts of Brixton, Brixton Hill, Streatham Hill, Clapham, Clapham Park, Herne Hill, Stockwell, Tulse Hill and Kennington, each at different stages of gentrification with suburban and urban elements. Vauxhall and South Lambeth are central districts in the process of redevelopment with high-density business and residential property. Streatham lies between suburban London and inner-city Brixton, with the suburban and developed areas of Streatham, Streatham Hill and Streatham Vale.

Along and around the South Bank, a tourist area has developed around the former Greater London Council headquarters of County Hall and the Southbank Centre and National Theatre. Also on the river is the London Eye and Shell Centre. Nearby is St Thomas' Hospital, Lambeth Palace and the Florence Nightingale Museum. Nearby is Brixton, home of Lambeth Town Hall and the Brixton Murals. 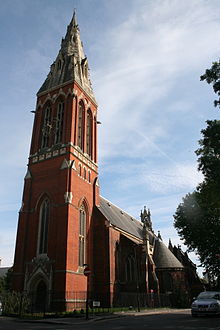 The Oval cricket ground in Kennington is the home of Surrey County Cricket.

The Basaveshwara statue at the Albert Embankment erected by the former Mayor of Lambeth Neeraj Patil was unveiled by the Prime Minister of India on 14 November 2015.[12]

Lambeth is the local authority with the highest relative gay or lesbian population in the UK, at 5.5%, with the borough containing the gay village of Vauxhall and the area around Clapham Common.[17]

A map showing the wards of Lambeth since 2002 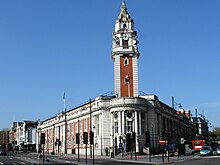 The council is run by a leader and cabinet, chaired by council leader Jack Hopkins. All cabinet members are from the ruling Labour Party who hold 57 of the 63 seats on Lambeth Council.

The Leader of the official Opposition is Jonathan Bartley (Green) and the leader of the Conservative group is Tim Briggs.

From 1994 to 2014, the Mayor of Lambeth was elected unanimously by their fellow councillors, with each of the three political parties supplying a candidate in rotation. According to the borough's website, this underscored the mayor's apolitical role and enables him or her to represent all the borough's citizens. Since 2014, the predominance of the Labour Party has meant that all subsequent Mayors have been members of the Labour group.

The borough's coat of arms is that of the former Metropolitan Borough of Lambeth, with two gold stars (mullets) in the second and third quarters of the shield indicating the addition of the districts of Clapham and Streatham. Its motto is "Spectemur agendo" ("Let us be judged according to our conduct").

The borough has three Parliamentary constituencies: Dulwich and West Norwood (shared with Southwark), Streatham and Vauxhall.

The former Metropolitan Borough of Lambeth and its successor have been twinned with the Vincennes district of Paris in France since 1955. Lambeth is also twinned with Bluefields, Nicaragua; Brooklyn, New York and Spanish Town, Jamaica. 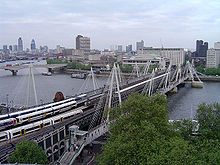 Hungerford Bridge and Golden Jubilee Bridges, seen from the north 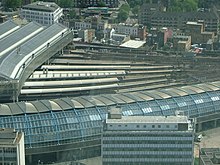 Waterloo station from the London Eye 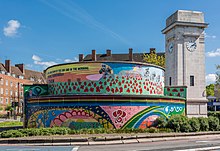