For the use of "long scale" and "short scale" in connection with musical instruments, see Scale length (string instruments).

The long and short scales are two of several naming systems for integer powers of ten which use some of the same terms for different magnitudes.

For whole numbers smaller than 1,000,000,000 (109), such as one thousand or one million, the two scales are identical. For larger numbers, starting with 109, the two systems differ. For identical names, the long scale proceeds by powers of one million, whereas the short scale proceeds by powers of one thousand. For example, "one billion" means one thousand millions in the short scale, while it means one million millions in the long scale. The long scale system uses additional terms for the intervening values, typically replacing the word ending -ion with -iard.

In both short and long scale naming, names are given each multiplication step for increments of the base-10 exponent of three, i.e. for each integer n in the sequence of multipliers 103n. For certain multipliers, including those for all numbers smaller than 109, both systems use the same names. The differences arise from the assignment of identical names to specific values of n, for numbers starting with 109, for which n=3. In the short scale system, the identical names are for n=3, 4, 5, ..., while the long scale places them at n=4, 6, 8, etc.

In the long scale, billion means one million millions (1012) and trillion means one million billions (1018), and so on. Therefore, an n-illion equals 106n.[2][3] In some languages, the long scale uses additional names for the interleaving multipliers, replacing the ending -ion with -iard; for example, the next multiplier after million is milliard, after billion it is billiard. Hence, an n-iard equals 106n+3.

Countries with usage of the long scale include most countries in continental Europe, and most that are French-speaking, German-speaking, Spanish-speaking[4] and Portuguese-speaking countries (except Brazil).

The short scale is used in most English-speaking and Arabic-speaking countries[citation needed], in Brazil, and in several other countries.

Number names are rendered in the language of the country, but are similar due to shared etymology. Some languages, particularly in East Asia and South Asia, have large number naming systems that are different from both the long and short scales, for example the Indian numbering system.[2][3]

For most of the 19th and 20th centuries, the United Kingdom largely used the long scale,[1][5] whereas the United States used the short scale,[5] so that the two systems were often referred to as British and American in the English language. After several decades of increasing informal British usage of the short scale, in 1974 the government of the UK adopted it,[6] and it is used for all official purposes.[7][8][9][10][11] With very few exceptions,[further explanation needed][12] the British usage and American usage are now identical.

To avoid confusion resulting from the coexistence of short and long term in any language, the International System of Units (SI) recommends using the metric prefix to indicate orders of magnitude, but it is only relevant to scientific applications, and not (for example) to finance. Unlike words like billion and million, metric prefixes keep the same meaning regardless of the country and the language.

The relationship between the numeric values and the corresponding names in the two scales can be described as:

The relationship between the names and the corresponding numeric values in the two scales can be described as:

The root mil in million does not refer to the numeral, 1. The word, million, derives from the Old French, milion, from the earlier Old Italian, milione, an intensification of the Latin word, mille, a thousand. That is, a million is a big thousand, much as a great gross is a dozen gross or 12 × 144 = 1728.[13]

The word milliard, or its translation, is found in many European languages and is used in those languages for 109. However, it is not found in American English, which uses billion, and not used in British English, which preferred to use thousand million before the current usage of billion. The financial term, yard, which derives from milliard, is used on financial markets, as, unlike the term, billion, it is internationally unambiguous and phonetically distinct from million. Likewise, many long scale countries use the word billiard (or similar) for one thousand long scale billions (i.e., 1015), and the word trilliard (or similar) for one thousand long scale trillions (i.e., 1021), etc.[14][15][16][17][18]

The existence of the different scales means that care must be taken when comparing large numbers between languages or countries, or when interpreting old documents in countries where the dominant scale has changed over time. For example, British English, French, and Italian historical documents can refer to either the short or long scale, depending on the date of the document, since each of the three countries has used both systems at various times in its history. Today, the United Kingdom officially uses the short scale, but France and Italy use the long scale.

On the other hand, the pre-1961 former French word billion, pre-1994 former Italian word bilione, Brazilian Portuguese word bilhão and the Welsh word biliwn all refer to 109, being short scale terms. Each of these words translates to the American English or post-1974 British English word billion (109 in the short scale).

As large numbers in natural sciences are usually represented by metric prefixes, scientific notation or otherwise, the most commonplace occurrence of large numbers represented by long or short scale terms is in finance. The following table includes some historic examples related to hyper-inflation and other financial incidents. 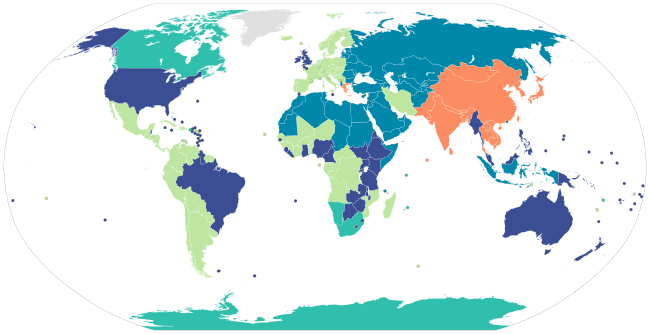 Most English-language countries and regions use the short scale with 109 being billion. For example:[shortscale note 1]

Most Arabic-language countries and regions use the short scale with 109 being مليار‎ milyar, except for a few countries like Saudi Arabia and the UAE which use the word بليون billion for 109. For example:[shortscale note 6][47][48]

Most Dutch-language countries and regions use the long scale with 109 = miljard, for example:[56][57]

Most French-language countries and regions use the long scale with 109 = milliard, for example:[longscale note 1][58][59]

German-language countries and regions use the long scale with 109 = Milliarde, for example:

With the notable exception of Brazil, a short scale country, most Portuguese-language countries and regions use the long scale with 109 = mil de milhões or milhar de milhões, for example:

Most Spanish-language countries and regions use the long scale, for example:[longscale note 2][61][62]

Some countries use either the short or long scales, depending on the internal language being used or the context.

The following countries use naming systems for large numbers that are not etymologically related to the short and long scales:

The long and short scales are both present on most continents, with usage dependent on the language used. Examples include:

Both long and short scale

Neither long nor short scale