Disney Digital Network is an American multi-channel network located in Culver City, California. It is the successor to Maker Studios, co-founded by Lisa Donovan, Danny Zappin, Scott Katz, Kassem Gharaibeh, Shay Carl, Rawn Erickson II, Ben Donovan,[3][4] and Philip DeFranco in 2009.[5] Maker Studios was acquired by The Walt Disney Company in 2014 for $500 million,[6][7] and was absorbed into the newly formed Disney Digital Network in 2017.[7]

Outside the US, Maker has significant audiences in the UK, Brazil and Australia, and aims to expand its Asian operations, where it currently has 700 million monthly unique views. Run by Rene Rechtman, President for International, Maker is building a headquarters in London for its commercial, production and marketing activities outside the US. An Asian hub has been established in Singapore, offering limited commercial and marketing support until the business is larger.[8] 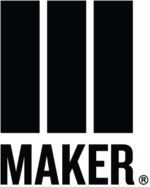 The logo of Maker Studios

In June 2012, Maker Studios announced that over 1,000 channels signed under the network have received and accumulated over 1.1 billion views for the month of June 2012.[11][12] YouTube channels under Maker Studios have also collectively earned over 90 million subscribers.[13] In October 2012, Maker Studios surpassed Machinima to become the number one independent YouTube network.[14] However, since that time, according to comScore, in December 2012, Fullscreen passed Maker to become the top ranked YouTube-based network.[15] In December 2012, shortly after the Ray William Johnson controversy,[clarification needed] Maker announced that it had closed a $36 million round of financing led by Time Warner Investments.[16] The most popular Maker production is Epic Rap Battles of History, which averages 30 million views an episode.[17] Maker's most successful channel was PewDiePie, the most subscribed user on YouTube, who signed under the Maker sub-network Polaris and later RevelMode until February 13, 2017, when Maker dropped him as a result of the international backlash to jokes and actions that were widely viewed as anti-semitic.[18]

On March 24, 2014, Maker Studios, Inc. agreed to sell itself to The Walt Disney Company for $500 million, rising to $950 million if financial milestones were met.[19][20] On April 14, 2014, Relativity Media submitted a competing bid of up to $1.1 billion, but Maker denied the bid.[21] In 2014, Jukin Media partnered with Maker Studios, giving Maker Studios access to Jukin's library of video clips, and giving Jukin access to Maker's operational resources, The partnership also resulted in the launch of a dedicated website for FailArmy, Jukin's owned and operated entertainment brand.[22] In December 2015, the company became a subsidiary of Disney Consumer Products and the Disney Interactive division of The Walt Disney Company.[6] The Network also partnered with Fusion TV in a deal that falls under the corporate umbrella of The Walt Disney Company.[23]

In February 2017, Maker Studios had around 60,000 YouTube partnerships, but announced that it intends to reduce this to about 1,000. Many partnered YouTubers had been unhappy with the terms of their contracts, including difficulty with ending contracts.[24] On May 2, 2017, Disney absorbed the studio into the newly formed Disney Digital Network.[7]

On January 19, 2018, Twitch signed a deal with Disney to secure exclusive content from some of the entertainment giant's top YouTubers, including Toby Turner, Markiplier and Jacksepticeye. A total of four YouTubers (with a combined total of over 44 million subscribers), are involved in the deal, and each will manage their own channels on Twitch.[25]

Maker Studios formerly produced Ray William Johnson's Equals Three and Your Favorite Martian.[14] In October 2012, Johnson announced he would be leaving Maker Studios in an episode of Equals Three.[45][46] Johnson had also formed his own production studio, Runaway Machine (formerly Runaway Planet).[47][48] Johnson has stated online that he left Maker Studios due to the pressure the company put on him into signing a contract which gave Maker a 40% share of his channel's AdSense revenue and 50% of his show's intellectual property rights. Johnson stated that they were using "thuggish tactics" to pressure him into signing the contract, one of which was allegedly leveraging his AdSense account for the intellectual property rights to Your Favorite Martian. He also claimed that Maker Studios CEO, Danny Zappin, is a convicted felon, which he was not made aware of, when teaming up with Maker Studios. Zappin later publicly admitted to this claim.[49][50][51][52]