"Mark Fischbach" redirects here. It is not to be confused with Marc Fischbach.

Mark Edward Fischbach (born June 28, 1989),[4] known online as Markiplier, is an American YouTuber and podcast host. Originally from Honolulu, Hawaii,[5][6] he began his career in Cincinnati, Ohio, and is currently based in Los Angeles, California. As well as uploading videos on his main YouTube channel, he is the co-founder of clothing company Cloak with fellow YouTuber Jacksepticeye,[7] and the co-host of the now defunct Unus Annus channel.

Fischbach is primarily known for his playthroughs of indie and horror games, including the Five Nights at Freddy's series, Amnesia: The Dark Descent and its sequel, Garry's Mod, Happy Wheels, Surgeon Simulator, SCP – Containment Breach and Slender: The Eight Pages, among others.

Fischbach has collaborated on sketch comedy and gaming videos with a number of fellow YouTubers, including CrankGameplays, Jacksepticeye, LordMinion777, Muyskerm, PewDiePie, Matthias, Game Grumps, Cyndago, Yamimash, Jacksfilms, CaptainSparklez, Egoraptor and LixianTV, who currently works as his editor. He has also collaborated with celebrities such as Jack Black[10] and Jimmy Kimmel.

A recurring staple of Fischbach's channel are charity live streams, during which he plays games while campaigning and collecting donations for various charities, including Cincinnati Children's Hospital Medical Center, the Depression and Bipolar Support Alliance, and Best Friends Animal Society.[11]

Fischbach first joined YouTube on March 6, 2012, creating a channel under the username "Markiplier", and uploaded his first video on April 4, 2012.[12] Fischbach's original intent for the channel was sketch comedy where he would be portraying all of the characters in the sketches.[13] This led to the creation of the name "Markiplier", a portmanteau of Mark and multiplier.[13] Fischbach's first series was a playthrough of the video game Amnesia: The Dark Descent. After playing several other game series, including Penumbra and Dead Space, YouTube banned Fischbach's AdSense account, and he created a new channel on May 26, 2012, markiplierGAME.[14]

In 2014, the MarkiplierGAME channel was listed on NewMediaRockstars Top 100 Channels, ranked at number 61.[15] That year, Fischbach announced he was planning to move to Los Angeles, California to be closer to other resources for his channel, such as the YouTube Space and other content creators.[16] In August 2014, Fischbach began his famous Five Nights at Freddy's playthrough, which became his most popular playthrough to date, the first part having over 80 million views as of January 2021. Due to the success of this series, Fischbach played the other games in the FNAF franchise, and also had a cameo in Five Nights at Freddy's AR: Special Delivery.[17][18]

Fischbach and fellow YouTuber Jenna Mae appeared on Jimmy Kimmel Live! in September 2015 following backlash Kimmel received regarding jokes he made about YouTube and Let's Play videos.[9] In 2015, he was rated sixth in a list of the twenty most influential celebrities among teenagers in the United States.[19] 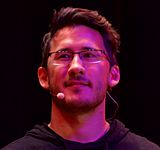 Beginning in 2015, Fischbach lived with fellow YouTubers Daniel Kyre and Ryan Magee, who created and ran the YouTube sketch comedy and music channel Cyndago. Matt Watson from Kids w/ Problems later joined Cyndago after they moved to Los Angeles. Their work was noted for having unexpected endings and dark, often disturbing, humor.[20][21] Cyndago disbanded following the death of Daniel Kyre.[22] At the time of their disbandment, the group made forty sketches and fourteen original songs, many of them featuring Fischbach.[20] After the death of Daniel Kyre and disbandment of Cyndago, Fischbach temporarily went on hiatus from September 17, 2015 to October 5, 2015.[23] He returned and reached 10 million subscribers on October 15, 2015.[24]

Fischbach co-hosted the 2015 South by Southwest Gaming Awards with The Legend of Korra voice actor Janet Varney,[25] and was featured in YouTube Rewind.[26]

Throughout 2016, Fischbach moved some of his focus to comedy sketches, showing his aspiration of improvisational theatre. In 2017, Fischbach posted an interactive Choose Your Own Adventure-style video titled A Date with Markiplier, which was well received by fans.[27] On March 29, 2018, Fischbach announced his YouTube channel had surpassed 20 million subscribers.[28]

In October 2019, Fischbach announced a new Choose Your Own Adventure-style story similar to A Date With Markiplier, a YouTube Originals production titled A Heist with Markiplier. Produced by Fischbach and Rooster Teeth, the series contains 31 possible endings and features other YouTubers such as Rosanna Pansino, Matthew Patrick, and Game Grumps.[29]

On November 15, 2019, Fischbach launched a new channel with fellow YouTuber Ethan Nestor (known online as CrankGameplays) called Unus Annus, a channel which planned to upload a video every day for one year, after which the channel would be deleted along with its videos.[30][31] The channel rose to early success, gaining 1 million subscribers in its first 5 days and 4.56 million in its last few minutes, and over 11.5 million video views in its first week.[32][33] Following a final 12-hour live stream that peaked at over 1.5 million concurrent viewers, the channel was deleted by Fischbach and Nestor on November 14, 2020 at 12:00 a.m. PST.[34]

Fischbach joined the board of comic book publisher Red Giant Entertainment in November 2014.[35] In June of that year at the San Diego Comic-Con, he co-hosted a panel with figures from the company including CEO Benny R. Powell, and writers David Campiti, Mort Castle, David Lawrence, and Brian Augustyn.[36] In 2016, it was announced that he would appear in his own line of comics.[37]

Fischbach, along with Wade Barnes (LordMinion777) and Bob Muyskens (Muyskerm) has streamed a podcast on Twitch called 3 Peens in a Podcast since 2018, where the trio discusses current events and plays multiplayer games.[40]

In 2019, Fischbach co-produced and starred in Edge of Sleep, an episodic audio drama released on iTunes.[41]

In May 2021, Fischbach announced that he, Barnes, and Muyskens would be launching a podcast called Distractible. The podcast is prerecorded and produced by QCode, and streams on Spotify and Apple Podcasts.[42]

In 2018, Markiplier announced the launch of a new fashion brand called Cloak, in a joint venture with Jacksepticeye.[7] The brand was envisioned and launched as a gamer-focused athleisure line distinct from their personal merchandise.[43] The brand has released collaborations with Mojang Studios, Five Nights at Freddy's, and The Oregon Trail.

In 2020, fellow YouTuber and streamer Pokimane joined Cloak as a partner and creative director.[44][45]

Fischbach has participated in multiple charity live streams and fundraisers.[46] In 2017, Forbes reported that Fischbach and his fans raised around $3 million for charity through these events.[47] In March 2018, in celebration of reaching 20 million subscribers, Fischbach announced he would donate all proceeds from a 48-hour sale of his "Tasteful Nudes" Charity Calendar to the Cancer Research Institute; he raised over $490,000 for the charity and won the 2020 Oliver R. Grace Award.[48][49]

Fischbach was born at the Tripler Army Medical Center in Honolulu, Hawaii.[5] His father Cliffton M. Fischbach (died 2008),[50] a German American, served in the U.S. Army.[51] While stationed in Korea, he met Fischbach's mother,[51] a native Korean.[52] After he was born, his family moved to Cincinnati, Ohio where he was raised.[51] He grew up in Milford, Ohio[53] and attended Milford High School where he was a member of the school's marching band where he played trumpet.[54] while growing up, his family was poor, something that he frequently makes jokes about. He has an older brother, Jason Thomas "Tom" Fischbach, an artist and author of the webcomic Twokinds.[5][55] While Tom Fischbach is featured in some videos, he mostly stays away from allowing his face to be filmed.[56]

Fischbach studied biomedical engineering at the University of Cincinnati, but dropped out to pursue his YouTube career.[57]

While not endorsing a specific political party, Fischbach described himself as a "liberal".[59] Fischbach has expressed support for universal health care[60] and stricter gun control following the Stoneman Douglas High School shooting.[61] Fischbach is an ally of the LGBT rights movement, having raised money for the Human Rights Campaign in one of his charity live streams.[62] In 2020, he openly condemned the murder of George Floyd.[63]