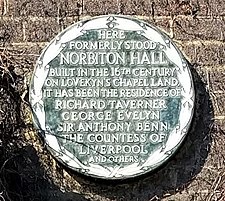 Mary Chester was born on 24 June 1777, the daughter of Charles Bagot Chester and Catherine Legge. She had three brothers and one sister.[1]
Her father was the son of Sir Walter Bagot, Bt[2] and the brother of the first Lord Bagot.[3] Born Charles Bagot, her father took the additional surname Chester in 1755 on inheriting Chicheley Hall, Buckinghamshire from his cousin, Sir Charles Bagot Chester, Bt.[4]
Her mother was the granddaughter of William Legge, 1st Earl of Dartmouth.[2][5]

In 1815 Mary Chester was granted a grace and favour apartment at Hampton Court Palace, where her elder sister Catherine Chester had been a resident since 1808.[6] By this time Mary had become the close friend and companion of Louisa, Countess of Liverpool, the wife of the prime minister, Robert Jenkinson, Earl of Liverpool.[7]

Louisa died after a long illness in June 1821 aged 54.[8] The following year, on 24 September 1822, Lord Liverpool was married to Mary Chester at Hampton Court[3] by the Lord Bishop of London.[9] Miss Mary Chester, aged 45 at the time, then became the Countess of Liverpool.[1] Lord Liverpool had been grief-stricken at Louisa's death, and his re-marriage to her long-time friend was seen as proof of his need for a 'peaceful domestic refuge',[10] with Louisa's sister, Lady Erne, describing Mary as 'a person of more than ordinary merit'.

Liverpool began to suffer from ill-health, and finally retired as prime minister in April 1827, after having a severe stroke two months earlier. After this, he and Mary remained at their country house at Coombe, Surrey. Here his conditioned remained poor, and he died on 4 December 1828 in the presence of Mary.[11] Having died childless, he was succeeded as Earl of Liverpool by his younger half-brother Charles.[12]

In 1829 Mary, now known as the Dowager Countess of Liverpool, bought Norbiton Hall near Kingston upon Thames from Charles Pallmer MP. Here she lived, along with Robert Henry Jenkinson, her late husband's cousin.[13][14] Mary died on the 18 October 1846, aged 69 years, at Norbiton Hall.[15] She had been suffering from heart disease for a number of years.[16] She was buried at All Saints Church, Kingston upon Thames, on 24 October.[17]