Decimal multiplicative prefixes have been a feature of all forms of the metric system, with six of these dating back to the system's introduction in the 1790s. Metric prefixes have also been used with some non-metric units. The SI prefixes are metric prefixes that were standardized for use in the International System of Units (SI) by the International Bureau of Weights and Measures (BIPM) in resolutions dating from 1960 to 1991.[1] Since 2009, they have formed part of the International System of Quantities. They are also used in the Unified Code for Units of Measure (UCUM)

The BIPM specifies twenty prefixes for the International System of Units (SI).

Each prefix name has a symbol that is used in combination with the symbols for units of measure. For example, the symbol for kilo- is k, and is used to produce km, kg, and kW, which are the SI symbols for kilometre, kilogram, and kilowatt, respectively. Except for the early prefixes of kilo-, hecto-, and deca-, the symbols for the multiplicative prefixes are uppercase letters, and those for the fractional prefixes are lowercase letters.[2] There is a Unicode symbol for micro µ for use if the Greek letter μ is unavailable.[Note 1] When both are unavailable, the visually similar lowercase Latin letter u is commonly used instead. SI unit symbols are never italicised.

Prefixes corresponding to an integer power of one thousand are generally preferred. Hence 100 m is preferred over 1 hm (hectometre) or 10 dam (decametres). The prefixes deci-, and centi-, and less frequently hecto- and deca-, are commonly used for everyday purposes, and the centimetre (cm) is especially common. Some modern building codes require that the millimetre be used in preference to the centimetre, because "use of centimetres leads to extensive usage of decimal points and confusion".[3]

Prefixes may not be used in combination. This also applies to mass, for which the SI base unit (kilogram) already contains a prefix. For example, milligram (mg) is used instead of microkilogram (μkg).

In the arithmetic of measurements having units, the units are treated as multiplicative factors to values. If they have prefixes, all but one of the prefixes must be expanded to their numeric multiplier, except when combining values with identical units. Hence:

When powers of units occur, for example, squared or cubed, the multiplicative prefix must be considered part of the unit, and thus included in the exponentiation:

Application to units of measurement

The choice of prefixes with a given unit is usually dictated by convenience of use. Unit prefixes for amounts that are much larger or smaller than those actually encountered are seldom used.

The units kilogram, gram, milligram, microgram, and smaller are commonly used for measurement of mass. However, megagram, gigagram, and larger are rarely used; tonnes (and kilotonnes, megatonnes, etc.) or scientific notation are used instead. Megagram and teragram are occasionally used to disambiguate the metric tonne from other units with the name "ton".[citation needed]

The kilogram is the only base unit of the International System of Units that includes a metric prefix.

The kilometre, metre, centimetre, millimetre, and smaller units are common. The decimetre is rarely used. The micrometre is often referred to by the older non-SI name micron. In some fields, such as chemistry, the ångström (0.1 nm) has been used commonly instead of the nanometre. The femtometre, used mainly in particle physics, is sometimes called a fermi. For large scales, megametre, gigametre, and larger are rarely used. Instead, ad hoc non-metric units are used, such as the solar radius, astronomical units, light years, and parsecs; the astronomical unit is mentioned in the SI standards as an accepted non-SI unit.

Prefixes for the SI standard unit second are most commonly encountered for quantities less than one second. For larger quantities, the system of minutes (60 seconds), hours (60 minutes) and days (24 hours) is accepted for use with the SI and more commonly used. When speaking of spans of time, the length of the day is usually standardized to 86400 seconds so as not to create issues with the irregular leap second.

Larger multiples of the second such as kiloseconds and megaseconds are occasionally encountered in scientific contexts, but are seldom used in common parlance. For long-scale scientific work, particularly in astronomy, the Julian year or annum is a standardized variant of the year, equal to exactly 31557600 SI seconds (365 days, 6 hours). The unit is so named because it was the average length of a year in the Julian calendar. Long time periods are then expressed by using metric prefixes with the annum, such as megaannum or gigaannum.

The SI unit of angle is the radian, but degrees, minutes, and seconds see some scientific use.

Official policy also varies from common practice for the degree Celsius (°C). NIST states:[4] "Prefix symbols may be used with the unit symbol °C and prefix names may be used with the unit name degree Celsius. For example, 12 m°C (12 millidegrees Celsius) is acceptable." In practice, it is more common for prefixes to be used with the kelvin when it is desirable to denote extremely large or small absolute temperatures or temperature differences. Thus, temperatures of star interiors may be given in units of MK (megakelvins), and molecular cooling may be described in mK (millikelvins).

In use the joule and kilojoule are common, with larger multiples seen in limited contexts. In addition, the kilowatt hour, a composite unit formed from the kilowatt and hour, is often used for electrical energy; other multiples can be formed by modifying the prefix of watt (e.g. terawatt hour).

Metric prefixes are widely used outside the metric SI system. Common examples include the megabyte and the decibel. Metric prefixes rarely appear with imperial or US units except in some special cases (e.g., microinch, kilofoot, kilopound). They are also used with other specialized units used in particular fields (e.g., megaelectronvolt, gigaparsec, millibarn). They are also occasionally used with currency units (e.g., gigadollar), mainly by people who are familiar with the prefixes from scientific usage.[citation needed] In astronomy, geology, and paleontology, the year, with symbol a (from the Latin annus), is commonly used with metric prefixes: ka, Ma, and Ga.

Official policies about the use of SI prefixes with non-SI units vary slightly between the International Bureau of Weights and Measures (BIPM) and the American National Institute of Standards and Technology (NIST). For instance, the NIST advises that 'to avoid confusion, prefix symbols (and prefix names) are not used with the time-related unit symbols (names) min (minute), h (hour), d (day); nor with the angle-related symbols (names) ° (degree), ′ (minute), and ″ (second),[4] whereas the BIPM adds information about the use of prefixes with the symbol as for arcsecond when they state: "However astronomers use milliarcsecond, which they denote mas, and microarcsecond, μas, which they use as units for measuring very small angles."[6]

An advantage of the SI system decimal prefixes is that they make for simplicity of calculation and conversion involving units of different sizes; consider for example the simplicity of buying 13 items of 390 g weight at €12.34 per kilogram, compared with items of 13+3⁄4 oz at $4.79 per pound (or, worse, with old non-metric currency: £4/15/9½). In the units used in the US, combining of units that are not decimal multiples of each other is often avoided by not mixing the units used, e.g., using inches, feet or miles only: 89  inches rather than 7 feet 5 inches (or 2 yards, 1 foot 5 inches).

When a metric prefix is affixed to a root word, the prefix carries the stress, while the root drops its stress but retains a full vowel in the syllable that is stressed when the root word stands alone.[citation needed] For example, kilobyte is /ˈkɪlɒbaɪt/, with stress on the first syllable. However, units in common use outside the scientific community may be stressed idiosyncratically. In English-speaking countries, kilometre is the most conspicuous example. It is often pronounced /kɪˈlɒmɪtər/, with reduced vowels on both syllables of metre. This stress is not applied to other multiples or sub-multiples of metre, or to other units prefixed with kilo-.

The prefix giga is usually pronounced in English as /ˈɡɪɡə/, with hard ⟨g⟩ as in get, but sometimes /ˈdʒɪɡə/, with soft ⟨g⟩ as in gin.[7][citation needed]

The LaTeX typesetting system features an SIunitx package in which the units of measurement are spelled out, for example, \SI{3}{\tera\hertz} formats as "3 THz". 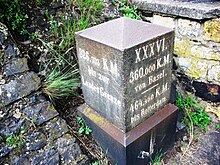 Distance marker on the Rhine: 36 (XXXVI) myriametres from Basel. The stated distance is 360 km; the decimal mark in Germany is a comma.

Some of the prefixes formerly used in the metric system have fallen into disuse and were not adopted into the SI.[8][9][10] The decimal prefix for ten thousand, myria- (sometimes also written as myrio-), and the binary prefixes double- (2×) and demi- (1/2×) were parts of the original metric system adopted by France in 1795,[11] but were not retained when the SI prefixes were internationally adopted by the 11th CGPM conference in 1960.

Double prefixes have been used in the past, such as micromillimetres or millimicrons (now nanometres), micromicrofarads (μμF; now picofarads, pF), kilomegatons (now gigatons), hectokilometres (now 100 kilometres) and the derived adjective hectokilometric (typically used for qualifying the fuel consumption measures).[12] These are not compatible with the SI.

Other obsolete double prefixes included "decimilli-" (10−4), which was contracted to "dimi-"[13] and standardized in France up to 1961.

In written English, the symbol K is often used informally to indicate a multiple of thousand in many contexts. For example, one may talk of a 40K salary (40000), or call the Year 2000 problem the Y2K problem. In these cases, an uppercase K is often used with an implied unit (although it could then be confused with the symbol for the kelvin temperature unit if the context is unclear). This informal postfix is read or spoken as "thousand" or "grand", or just "k".

The financial and general news media mostly use m or M, b or B, and t or T as abbreviations for million, billion (109) and trillion (1012), respectively, for large quantities, typically currency[14] and population.[15]

For nearly a century, engineers used the abbreviation MCM to designate a "thousand circular mils" in specifying the cross-sectional area of large electrical cables. Since the mid-1990s, kcmil has been adopted as the official designation of a thousand circular mils, but the designation MCM still remains in wide use. A similar system is used in natural gas sales in the United States: m (or M) for thousands and mm (or MM) for millions of British thermal units or therms, and in the oil industry,[16] where MMbbl is the symbol for "millions of barrels". This usage of the capital letter M for "thousand" is from Roman numerals, in which M means 1000.[17]

In some fields of information technology, it has been common to designate non-decimal multiples based on powers of 1024, rather than 1000, for some SI prefixes (kilo-, mega-, giga-), contrary to the definitions in the International System of Units (SI). This practice was once sanctioned by some industry associations, including JEDEC. The International Electrotechnical Commission (IEC) standardized the system of binary prefixes (kibi-, mebi-, gibi-, etc.) for this purpose.[18][Note 2]