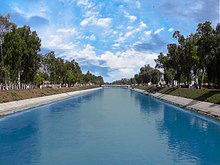 The district is administratively divided into three tehsils 7 Municipal Committees and 51 union councils:[14][15]

Mianwali district covers an area of 5,840 square kilometres (2,250 sq mi).[16] The area in north is a continuation of the Pothohar Plateau[17] and the Kohistan-e-Namak.[18][19] Southern side of the district is a part of Thal Desert.[20] Indus River flows through the district.[21]

Mianwali district has an extreme climate, with a long, hot summer season and cold, dry winters. Summer lasts from May to September and winter lasts from November till February.[22] June is the hottest month with average temperatures of 42 °C (highest recorded temperature 52 °C); in winter, December and January monthly average temperatures can be as low as 3 to 4 °C. The average rainfall in the district is about 385 mm.[23][24]

The main impact is of the Miana family which came from Baghdad, Iraq, and settled in Mianwali. So they preached Islam and spread awareness therein. Mianwali name is derived from Sufi saint Mian Ali's name (See the book "Maratib-e-Sultani). Mian Ali Mianwali was a known settlement and an agricultural region with forests during the Indus Valley Civilization (c.3300 – c.1300 BCE). Then later Vedic Civilization took place. In 997 CE, Sultan Mahmud Ghaznavi took over the Ghaznavid dynasty empire established by his father, Sultan Sebuktegin. In 1005 he conquered the Shahis in Kabul and followed it by the conquests of the Punjab region. The Delhi Sultanate and later Mughal Empire ruled the region. The population of the Punjab region became majority Muslim, following the conquests by various Muslim dynasties from Central Asia. The real historical representation of the Mianwali Region is older than 900 AD but the true accuracy is traced to the arrival of Qutb Shah in 1090 AD in this region who in later years of his conquest allowed his sons to settle and further rule the region. Their Lineage still exists to date in Mianwali District as well as in Pakistan and are known as Awan Tribe. Historically, all major rulers of South Asia governed this area in their turn. Mughal emperor Babur mentioned Isakhel while he was fighting against the Malik Awans and Niazi Pakhtuns as part of his campaign to conquer the Punjab during the 1520s (ref. Baburnama). Prior to the invasion of Nadir Shah in 1738, there is little to relate concerning the history of the northern part of the district. The upper half of the district was ruled by the Gakhars, who became feudatories of the Mughal Empire, of which the district continued to form a part until the invasion of Nadir Shah. In 1738 a portion of his army entered Chashma, and by its atrocities so cowed the Bannuchis and Marwats that a heavy tribute was raised from them. Another portion of the army crossed the Darra Pezu and worked its way down to Dera Ismail Khan. Contingents raised from the neighbourhoods of Bannu and Dera Ismail Khan marched under Nadir Shah's banner to the sack of Delhi. In 1739 the area west of the Indus was surrendered by the Emperor of Delhi to Nadir Shah and passed after his death to Ahmad Shah Abdali. The primary historical representation of this region dates back to Alexander the Great where his Conquest bought him during his journey from the Mianwali district and apart from his conquest adds various other conquests to the stream. In 1748 a Durrani army under one of Ahmad Shah's generals crossed the Indus at Kalabagh, and drove out the Ghakkars, who still ruled in the cis-Indus tracts of the district, owing nominal allegiance to the Emperor at Delhi. Their stronghold, Muazzam Nagar, was razed to the ground, and with their expulsion was swept away the last vestige of the authority of the Mughal Emperor in these parts. During British Raj Mianwali District was also among the states of British Punjab where regional offices of East India Company were in position until winter of 1883 when the regional office of East India Company in Mianwali was Shutdown due to civil unrest and hostile conditions.[28]

A view of Namal Lake in Mianwali Salt range

"Days of Yore" PR ZE. class 230 en route to Lakki Marwat from Mari Indus in frosty winter morning circa 1987. (Mianwali was the only district in Punjab with about 80 km of narrow gauge section, which was closed in 1992.)