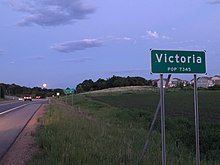 Highway 5 is considered a significant transit corridor, known as the Riverview Corridor, to downtown Saint Paul from the airport and points farther south and west. There has been discussion of creating a bus rapid transit or light rail line along the highway, much like the METRO Blue Line currently runs rails into downtown Minneapolis along State Highway 55.

Highway 5 is also known as Fort Road and West 7th Street in the city of St. Paul.

The route was completely paved by 1953.

When Highway 5 was slated for expansion in 1956, the construction threatened to demolish the remains of historic Fort Snelling, near the confluence of the Mississippi and Minnesota rivers. As a result of public outcry, the highway was built in a short tunnel underneath the Fort Snelling site, sparing the fort from destruction. This effort led to archaeological research into the remains of Fort Snelling and its eventual rebuilding as a state park.[2]

From 1934 to 1982, the eastern section of the highway between Saint Paul and Stillwater was originally marked as Minnesota 212, as it once reached old U.S. 212 in Saint Paul, but that segment was re-numbered as an extension of Highway 5 c. 1983.[3] This segment is still marked with the mileposts from 212,[1] which were a continuation of those from U.S. 212.

In the concurrency with I-494, the MN 5 shield is placed at most, but not all, interchanges. In 2007, new gore signs placed on France Avenue in Bloomington at its interchange with I-494 do not mention the Highway 5 concurrency, whereas the older signs they replaced did. The more recent interchange with Lyndale Ave (2009) displays the names of both highways.

In June 2015, it was announced that Highway 5 will be shortened by 8.3 miles by the state of Minnesota, giving the portion from Minnesota 120 to its eastern conterminous at Minnesota 36 to Washington County. The road is known as 34th St. between Jamaca Ave and Highway 120 and Stillwater Blvd. between Jamaca Ave. and Highway 36. The road is an extension of Washington County Roads 14 and 15. This road is designated from the county line to Manning Ave. as County Road 14 and from Manning Ave. to Highway 36 as County Road 15. This piece of the highway that will be returned to the county was originally marked as Minnesota 212. This portion of highway is now marked with county highway signs as well as Old Highway 5 signs.[4]

All exits are unnumbered except for the I-494 overlap.