Mount Cargill, known in Māori as Kapukataumahaka,[1] is a volcanic outcrop which dominates the skyline of northern Dunedin, New Zealand. 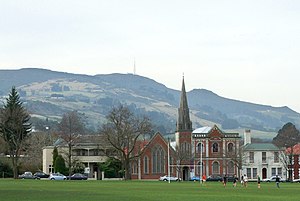 Mount Cargill (centre) and Buttar's Peak (to the right of the church steeple) dominate the skyline of Dunedin, New Zealand 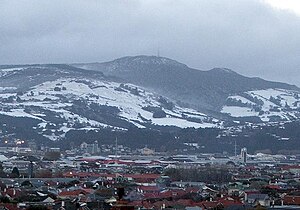 Dunedin sits beneath the snowy mid-winter slopes of Mt. Cargill in this photo from July 2007.

A view of Blueskin Bay from Buttar's Peak, near Mount Cargill

A view of the Organ Pipes on Mount Cargill

The peak is named for Captain William Cargill, an early leader of the Province of Otago. Māori legend tells of the mountain showing the profile of a prominent warrior, and indeed from Dunedin Buttar's Peak and Mount Cargill between them do form the outline of a reclining figure, with the nearby Buttar's Peak being the head and Mount Cargill the body.

Panoramic views of Dunedin and its surrounding area are visible from the summit, making it a popular, if difficult to access, site. A single rough road ascends to the peak, and several popular walking tracks also ascend the slopes.

Mount Cargill is topped by a telecommunications station and mast, the Mount Cargill Transmitting Station. The mast is Dunedin's tallest man-made structure.

Mt. Cargill is situated some 15 kilometres (9 miles) north of the city centre, and dominates the city's northern skyline. It rises to a height of 676 metres (2,218 ft). To the north and east of Mount Cargill's peak are several smaller peaks including Mount Zion, Mount Holmes and (most notably) Buttar's Peak.

A rough road from the end of Pine Hill Road provides vehicular access to the summit, and several walking tracks also lead to the top, notably a 4-kilometre (2.5 mi) walk from Bethune's Gully in North East Valley at the northern end of Dunedin's urban area and a 6-kilometre (3.7 mi) walk through Graham's Bush, which starts in Sawyers Bay close to Port Chalmers. These tracks pass through regenerating native bush and volcanic outcrops before a sharp climb along the northern flank immediately below the summit.[2]

The tracks pass two significant points of interest. One of these is a prominent formation of columnar jointed basalt known as the Organ Pipes.[3] Similar outcrops are found elsewhere in the Dunedin area, at Blackhead near Waldronville and at Second Beach, Saint Clair. The second point of interest is the small temperate cloud forest which dominates the vegetation of the upper slopes. Though not a true cloud forest, in that it is not tropical, it bears many of the hallmarks of true cloud forest, with abundant moss and fern cover under thick low canopy. The cloud forest is protected within a 1.8-square-kilometre (0.69 sq mi) reserve, which includes the peak of the mountain as well as several secondary peaks. Although the tracks are easy (but steep), care should be taken by walkers, as the weather conditions on Mount Cargill are notoriously unpredictable and can change very rapidly.

The peak is, along with the similarly high Flagstaff one of the highest points surrounding Dunedin, and as such, it is a popular lookout. From the summit, views can be obtained of the entire Dunedin urban area, as well as a considerable stretch of open countryside and much of Otago's coastline, from Shag Point near Palmerston to Nugget Point in The Catlins. Particularly notable is the view of the Otago Peninsula and Otago Harbour, the entire length of which can be seen from the summit.

Mount Cargill, and the nearby smaller peaks are among the youngest parts of the massive extinct Dunedin Volcano and was formed between 16 and 10 million years ago. Its peak comprises a nepheline phonolite dome, an intrusion through earlier pyroclastics and phonolite flows, suggesting that the volcanic origins of the peak were as a pyroclastic cone, followed by a plugging with the nepheline dome.[4]

This is a panorama of the view from the summit of Mount Cargill. The base of a television mast can be seen on the left, with the Otago Harbour and the Otago Peninsula beyond. Dunedin city centre can be seen in the middle.

This is a panorama of the view from just east of the summit of Mount Cargill. Otago Harbour runs from its entrance near the centre to the city centre on the right, the peninsula can be seen beyond. The central foreground shows the nearby Buttar's Peak. The base of a television mast can be seen at the extreme left and right edges.

The Mount Cargill transmitting station sits atop the mountain, broadcasting television and FM radio to Dunedin and the eastern Otago area. The station was completed in 1970, transmitting television channel DNTV2 (now part of TVNZ 1) and replacing the original station at Highcliff.[6] The station features a 104.6-metre (343 ft) mast,[2] the tallest structure in Dunedin.

The following frequencies were used until 29 April 2013, when Wharite switched off analogue broadcasts (see Digital changeover dates in New Zealand).