UK-based Lloyds Bank became the sole owner of the bank in 1966 and National Bank adopted the Lloyds Bank black horse as its logo. Lloyds TSB, as it then was, sold the bank to Australian ANZ Bank in 2003, at which time it became part of ANZ National Bank Limited, the New Zealand subsidiary of Australia and New Zealand Banking Group but for customers retained a separate corporate identity until rebranding as ANZ began in September 2012. ANZ announced they would adopt National's technology system and the majority of its products.

There is no longer a corporate identity named National Bank of New Zealand. Its business has been subsumed within ANZ Bank. 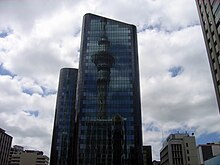 The successful flotation of the National Bank of New Zealand in London was announced in October 1872. It was to be a New Zealand bank and would begin by buying and expanding the operations of Dunedin's Bank of Otago.[1] The new bank had been incorporated in London by a group of people including a number of high-profile former New Zealand residents, among them former Governor Thomas Gore Browne, former Speaker Charles Clifford and former Wellington Provincial Superintendent Isaac Featherston. Another board member was Edward Brodie Hoare of Barnetts, Hoares, Hanbury and Lloyd, Bankers.[2] From the first New Zealand operations were managed from Dunedin. Adam Burnes was inspector and general manager.[3] The first branch away from Dunedin opened in Wellington in March 1873 with Alexander Kerr as its first manager.[4] Although "harmonised" it did not technically acquire the 13 branches of the Bank of Otago until 1 July 1873. Branches were also opened in 1873 in Auckland and Hamilton[5] and Christchurch. The National Bank of New Zealand (Ltd) Act gave it the right to issue banknotes redeemable (in specie or gold). Though the bank was technically domiciled in London (which provided certain advantages) the major portion of its shareholders were New Zealand resident or associated. In 1894 its headquarters were moved from Dunedin to Wellington.[6]

The bank tentatively dipped a toe into foreign waters in 1969 when it established a branch in Rarotonga, Cook Islands. This foray ended in 1986 when it sold its banking license in Rarotonga to European Pacific Banking Co.

The head office was moved from London to Wellington in 1978 and the Black Horse became its emblem. The Black Horse logo dates back to 1677 London when Humphrey Stockes adopted it as the sign for his shop. Stokes was a goldsmith and 'keeper of the running cashes', a banker. When Lloyds Bank took over his site in 1884 it kept the horse as its symbol.

Victoria St, Hamilton, between Hood and Collingwood Streets about 1880. The National Bank of New Zealand is the building beyond the tree.

In 2003 ANZ bought The National Bank from Lloyds TSB. ANZ also bought the right to continue to use the Black Horse logo for seven years.[7]

In March 2009, Hodges was named deputy chief executive for the ANZ group.[9] Jenny Fagg took over as CEO for Hodges.[9]

In September 2012, ANZ National Bank CEO David Hisco announced that it would drop The National Bank brand in favour of the ANZ brand over the next two years.[10]