For other uses, see NIWA (disambiguation).

The National Institute of Water and Atmospheric Research or NIWA (Māori: Taihoro Nukurangi), is a Crown Research Institute of New Zealand. Established in 1992, NIWA conducts research across a broad range of disciplines in the environmental sciences. It also maintains nationally and, in some cases, internationally important environmental monitoring networks, databases, and collections.

, NIWA had 697 staff spread across 14 sites in New Zealand and one in Perth, Australia.[1] Its head office is in Auckland, with regional offices in Hamilton, Wellington, Christchurch, Nelson, and Lauder (Central Otago). It also has small field teams, focused mostly on hydrology, stationed in Bream Bay, Lake Tekapo, Rotorua, Napier, Whanganui, Greymouth, Alexandra, and Dunedin. NIWA maintains a fleet of about 30 vessels for freshwater, marine, and atmospheric research.[2]

"NIWA's mission is to conduct leading environmental science to enable the sustainable management of natural resources for New Zealand and the planet."[3]

NIWA was formed as a stand-alone organisation in 1992 as part of a government initiative to restructure the New Zealand science sector.[4] Its foundation staff came mainly from the former Department of Scientific, Industrial Research and the Meteorological Service. One of the divisions absorbed was the N.Z. Oceanographic Institute. The Fisheries Research Division of the former Ministry of Agriculture and Fisheries joined NIWA in 1995.

NIWA focuses on atmospheric, marine, and freshwater research – extending from the deep ocean to the upper atmosphere – in New Zealand, the Pacific, Southern Ocean, and Antarctica.

Research projects are undertaken in collaboration with local and central government agencies, other Crown Research Institutes, industry, private research companies, and universities in New Zealand and the rest of the world. In 2007–08, NIWA scientists were involved in more than 970 collaborations and NIWA had formal links with some 150 overseas institutions.[7] Within New Zealand, NIWA has close working relationships with many Māori entities (85 entities in 2007-08[7]) through its Māori environmental research group, Te Kūwaha o Taihoro Nukurangi

Most of NIWA's revenue is from contestable research funding and commercial consultancy work. As of 2014[update]

In the period 2010-2012, NIWA defended itself in a court case claiming that they had exaggerated temperature increases. The charge was brought by the climate change sceptics The New Zealand Climate Education Trust - a branch of the NZ Climate Science Coalition. They challenged NIWA figures which showed a rise in temperatures in New Zealand of 1degC over the past 100 years. The skeptic group said the published increase of 1degC was significantly higher than global warming figures around the world and almost 50 per cent above the global average. In the High Court judgement, released today, Justice Geoffrey Venning ruled that the New Zealand Climate Science Education Trust had not been successful in any of the challenges they brought against NIWA. Justice Venning also decided that NIWA's cost should be paid by the trust and he said that if an agreement on the costs could not be reached he would make another ruling at a later stage.[9]

Past and Present Notable Scientists 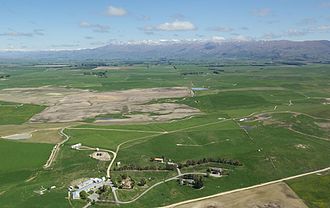 The NIWA Lauder Atmospheric Research Laboratory takes atmospheric measurements for the purpose of observing and better understanding interactions between the stratosphere, troposphere and global climate. This is achieved through measurements of ozone, solar radiation, aerosols and greenhouse gases.[10] There are approximately 10 staff (scientists and technicians) working at the Laboratory (December 2015).

Lauder (45.04S, 169.68E, 370 m a.s.l.) is located 33 km north-east of Alexandra, in the South Island of New Zealand.[11] It also hosts a telescope part of the BOOTES network. This location was chosen for the laboratory due to the area's low horizons, clear skies, dry atmosphere, and southern latitude location.[12]

A research laboratory was originally established at Lauder in 1961 with the purpose of observing the aurora.[12][13]

In the Mid-70's Lauder was a ground tracking station for the satellite ensemble "International Satellites for Ionospheric Studies" (ISIS (satellite)). By the late 1970s researched had shifted focus to the stratosphere.[10] This shift was driven by the fear of ozone depletion due to manufactured gases, and by the time the ozone hole was discovered. Lauder had begun measuring UV radiation, ozone, and other gases associated with ozone depletion.[14] From the 1990s Lauder has also monitored the effects of ozone depletion on solar UV irradiance.[15]

Recently, research at Lauder has focused on interactions between climate change and ozone depletion and Lauder now measures most gases that contribute to climate change.[10] Computer models to predict future atmospheric changes have also been developed at Lauder, and the atmospheric measurements taken at Lauder are used in climate models around the world.[10]

The Lauder Atmospheric Research Laboratory is well known throughout the international world of atmospheric research through its participation in the international Network for the Detection of Atmospheric Composition Change (NDACC),[18] BSRN,[19] TCCON,[20] and GCOS Reference Upper Air Network (GRUAN).[16][21]

Lauder has many ongoing long-term measurements, including the longest time-series of nitrogen dioxide in the world.[11]

The Laboratory is located in a data-sparse region of the globe. The oceans of the southern hemisphere and the Antarctic region play an important role in the global climate system and so measurements taken at Lauder are valuable to the global scientific community.[17]

is used mainly for coastal research, but has gone further afield to deploy ocean-profiling Argo floats, from Chile to Mauritius.[7]

NIWA set up the Te Kūwaha - Māori Environmental Research group to develop ways of sharing knowledge with Māori communities and empowering Māori business with the latest science. This is a critical part of science in Aotearoa New Zealand as institutes have been criticized for poor representation for Māori and Pasifika researchers. [24] The team have had notable success with a taonga species guide and Māori specific climate impact research.[25]

In 2018 NIWA commissioned 3 powerful Cray supercomputers called Mahuika, Maui and Kupe, forming the HPCF (High Performance Computing Facility).[26] The HPCF is capable of processing more than two thousand trillion calculations per second. 2 of the 3 Cray supercomputers (Mahuika and Maui) are located in NIWA's Wellington campus, while Kupe is located at the University of Tamaki Data Centre. It also leads investigations such as the analysis of genetic information, the modelling of the impact of climate change and forecasting weather related hazards. The detailed specifications of the HPCF can be found here

As at 1 August 2008, NIWA had 1339 operational stations in its climate and water monitoring networks, spread throughout New Zealand, including the Chatham Islands.[7] NIWA also holds data from more than 3000 closed stations, many of which have long usable records.[7] The National Water Quality Network, for instance, has been operating at 77 sites since the 1970s.[7] It can now show long-term trends in water quality.

, for instance, contains more than 250 million individual measurements (as of August 2008[update]

), with records dating back to the 1850s.[7] The New Zealand Freshwater Fish Database

records the occurrence of fish in fresh waters of New Zealand, including major offshore islands, and details of their habitats. As of June 2009[update]

, the database included more than 28 000 records. Among other things, these databases are used to detect geographical and temporal trends in the state of the environment. 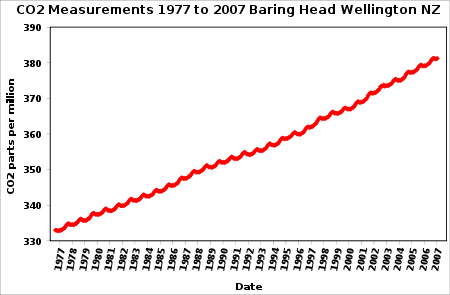 NIWA holds the longest continuous record of atmospheric CO2 concentrations in the Southern Hemisphere, measured at Baring Head, near Wellington, since the 1970s. Along with equivalent measurements from the Northern Hemisphere, taken at Mauna Loa Observatory in Hawaii, these records are used to model the effects of atmospheric CO2 on global climate.

The information in NIWA's databases is in high demand. In the 2007-08 financial year, for instance, NIWA responded to more than 350 000 requests for data from its databases.[7] In July 2007, NIWA allowed free online access to archived data on climate, lake levels, river flow, sea levels, water quality, and freshwater fish.

The NIWA Invertebrate Collection[27] is the largest repository of marine invertebrate (animals without a backbone) specimens from the New Zealand region, southwestern Pacific, and the Ross Sea (Antarctica). It holds representatives of almost all phyla in the New Zealand region. Collected over the last 50 years and still growing, the collection holds several million specimens, ranging from single-celled organisms to giant corals. As of 2015[update]

, it included over 2100 type specimens of species new to science (800 holotypes and 1300 paratypes). The collection is used by scientists, teachers, and journalists throughout New Zealand and the world.

In 2002 NIWA teamed up with the Institute of Geological and Nuclear Science to create the Natural Hazards Centre as a New Zealand resource for all hazards information and advice. The centre develops systems to monitor and predict the following hazards: earthquakes, tsunami, floods, storms, landslides, coastal flooding and waves, coastal erosion, and volcanoes.