In 1818, Lord Charles Somerset, the Cape Colony's first civil Governor, issued a proclamation to control the wine trade, imposing a tax on wine brought into Cape Town for sale. The net proceeds would be used to form a Public Library which should "lay the foundation of a system, which shall place the means of knowledge within reach of the youth of this remote corner of the Globe," (presuming a globe hath corners) "and bring within their reach what the most eloquent of ancient writers has considered to be one of the first blessings of life, 'Home Education'."[1] Since that time, South Africa's library development was bifurcated although the library in Cape Town was the original establishment. The most likely model for Cape Town's "Public Library" was the London Institution (established in 1805 in the style of an Athenaeum).[1]

The Library's first significant acquisition was the collection of Joachim Nicolaus von Dessin, who bequeathed his books to the Dutch Reformed Church in 1761 to serve as the foundation of a public library. In 1820 the board of trustees decided to donate the Dessinian Collection to the new library. Other notable donations followed over the years, among others Sir George Grey who when he left South Africa in 1861 presented the Library with his remarkable personal collection of medieval and Renaissance manuscripts and rare books. In 1873 the South African Public Library became a legal deposit library for the Cape Colony, and from 1916 it received all printed items published throughout the country. The Library continued as a legal deposit library until 1954, when this function was taken over by the City of Cape Town. From then on it began to develop its unique character as a national reference library devoted to research based on its extensive stock, with a concurrent name change in 1967 to the South African Library.[2]

Diplomat Edmund Roberts visited the library, then called the South African Library around 1833 and described it as "once the pride and boast of the colony." He noted that the library had approximately 10,000 volumes and called it a "highly creditable place."[3]

The "Staats-Bibliotheek der Zuid-Afrikaansche Republiek" (State Library of the South African Republic) came into being thanks to a donation of books from the Maatschappij der Nederlandsche Letterkunde. These books consisted of a complete library of Dutch works, mainly Dutch literature and language, to the Transvaal Republic's government. The first consignment of eight chests of books arrived in 1883, including a chest from the Dutch Bible Society. On 21 September 1887 the Transvaal government approved the constitution of the Staats-Bibliotheek. As Pretoria began to grow in size, there arose a need for a public library. The first Pretoria Public Library had opened its doors in 1878, but because of ongoing financial problems was closed down in 1890. In 1893 strong public support and a collection of 700 saw another public library arise, this time under the wing of the Staats-Bibliotheek and with the bookstock of the former Public Library. From that time onward until 1964, the State Library performed a dual role as public library and national library. The first national librarian, the Afrikaans poet Jan Celliers, saw exchange agreements as a means of enriching the State Library's collections. The first exchange agreement was entered into in 1898 with the Smithsonian Institution of Washington in the United States. In terms of the agreement the State Library would receive all American official publications in exchange for two copies of each official publication of the South African republic. From the early thirties under the guidance of the visionary national librarian Matthew Stirling, the State Library began to develop the character of a central library for South Africa, taking on functions such as striving for a national library lending system and a centre for bibliographical information.[2] 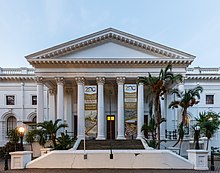 Contemporary view of the entrance to the library in Cape Town.

Creation under the National Library Act