An electorate or electoral district (Māori: rohe pōti) is a geographical constituency used for electing members (MPs) to the New Zealand Parliament.[1] The size of electorates is determined such that all electorates have approximately the same population.

Before 1996, all MPs were directly chosen for office by the voters of an electorate. In New Zealand's electoral system, 72 of the usually 120 seats in Parliament are filled by electorate members, with the remainder being filled from party lists in order to achieve proportional representation among parties. The 72 electorates are made up from 65 general and seven Māori electorates. The number of electorates increases periodically in line with national population growth; the number was increased from 71 to 72 starting at the 2020 general election.

The Electoral Act 1993 refers to electorates as electoral districts.[1] Electorates are informally referred to as seats, but more technically the term "seat" can refer to any elected member's place in Parliament (inclusive of list MPs).[a]

the Representation Commission determines electorate boundaries.[2] The Commission consists of:

Although the New Zealand Parliament is intended to have 120 members, some terms have exceeded this quantity. Overhang seats arise when a party win more seats via electorates than their proportion of the party vote entitles them to; other parties are still awarded the same number of seats that they are entitled to, which results in more than 120 seats in total.[5] In 2005 and 2011, 121 members were elected; 122 members were elected in 2008.[6]

Originally, electorates were drawn up by the Representation Commission based on political and social links, with little consideration for differences in population. Elections for the New Zealand House of Representatives in the 1850s modelled the electoral procedures used for the British House of Commons, which at that time featured both single-member electorates (electorates returning just one MP) and multi-member electorates (electorates returning more than one MP).[7] Each electorate was allocated a different number of MPs (up to three) in order to balance population differences. All electorates used a plurality voting system.[8] From 1881, a special country quota meant that rural seats could contain fewer people than urban seats, preserving improportionality by over-representing farmers.[9][need quotation to verify] For the 1905 election the multi-member electorates were abolished. The quota system persisted until 1945.[7]

Because of the increasing North Island population, the Representation Commission awarded the North Island an additional electoral seat beginning in the 2008 general election.[10] Another new North Island seat was added for the 2014 general election.[11] Each time, the need for an extra seat was determined from the results of the most recent New Zealand census, with the seat coming out of the total number of list seats. The total number of list seats has thus declined from 55 to 49 since the introduction of mixed-member proportional voting in 1996.

The Representation Commission determines the names of each electorate following the most recent census.[2] An electorate may be named after a geographic region, landmark (e.g. a mountain) or main population centre. The Commission adopts compass point names when there is not a more suitable name. The compass point reference usually follows the name of the main population centre, e.g. Hamilton East.

Further information on the historic qualifications required to vote: History of voting in New Zealand

Much more durable have been the Māori electorates, created in 1867 to give separate representation to Māori citizens. Although originally intended to be temporary, they came to function as reserved positions for Māori until 1967, ensuring that there would always be a Māori voice in Parliament. In 1967 the reserved status of the Maori seats was removed, allowing non-Maori to stand in the Maori electorates, thus removing any guarantee that Maori would be elected to Parliament. Until 1993 the number of Māori electorates was fixed at four, significantly under-representing Māori in Parliament. In 1975 the definition of who could opt to register on either the general or the māori roll was expanded to include all persons of Māori descent.[12] Previously all persons of more than 50% Māori ancestry were on the Māori roll while persons of less than 50% Māori ancestry were required to enrol on the then European roll. Only persons presumed to have equal Māori and European ancestry (so-called half-castes) had a choice of roll.[13] Since the introduction of MMP, the number of seats can change with the number of Māori voters who choose to go on the Māori roll rather than the general roll.

Electorates in the 53rd Parliament 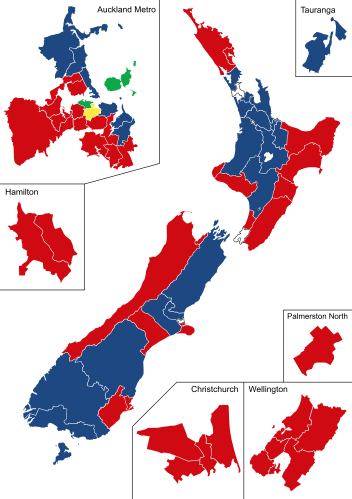 Electoral districts in the 2020 general election for the 53rd Parliament reflect changes made in the Representation Commission’s 2019/2020 boundary review. As well as new boundaries for many districts, the names of ten electorates have been changed, and one new electorate (Takanini) has been created.[14] While some changes were made to the boundaries of the Māori electorates, their names and general area remain the same as in the 52nd Parliament.