listen); Norman: Normaundie; from Old French Normanz, plural of Normant, originally from the word for 'northman' in several Scandinavian languages)[2] is the northwesternmost of the eighteen regions of France, roughly coextensive with the historical Duchy of Normandy.

Normandy is divided into five administrative departments: Calvados, Eure, Manche, Orne and Seine-Maritime. It covers 30,627 square kilometres (11,825 sq mi),[3] comprising roughly 5% of the territory of metropolitan France. Its population of 3,322,757 accounts for around 5% of the population of France. The inhabitants of Normandy are known as Normans, and the region is the historic homeland of the Norman language. The neighboring regions are Hauts-de-France and Ile-de-France to the east, Centre-Val de Loire to the southeast, Pays de la Loire to the south, and Brittany to the southwest. The capital is Rouen.

Normandy's name comes from the settlement of the territory by mainly Danish and Swedish Vikings ("Northmen") from the 9th century, and confirmed by treaty in the 10th century between King Charles III of France and the Viking jarl Rollo. For four hundred years following the Norman conquest of England in 1066, Normandy and England were linked by having the same person reign as both Duke of Normandy and King of England.

Rollo's descendant William became king of England in 1066 after defeating Harold Godwinson, the last of the Anglo-Saxon kings, at the Battle of Hastings, while retaining the fiefdom of Normandy for himself and his descendants.

In 1204, during the reign of John of England, mainland Normandy was taken from England by France under King Philip II. Insular Normandy (the Channel Islands) remained, however, under English control. In 1259, Henry III of England recognized the legality of French possession of mainland Normandy under the Treaty of Paris.

In 1790 the five departments of Normandy replaced the former province.

Historic photograph of the Caserne Jeanne d'Arc in Rouen, today seat of the Norman regional assembly

The modern region of Normandy was created by the territorial reform of French Regions in 2014 by the merger of Lower Normandy, and Upper Normandy. The new region took effect on 1 January 2016, after the regional elections in December 2015.[5]

The Regional Council has 102 members who are elected under a system of proportional representation. The executive consists of a president and vice-presidents. Hervé Morin from the Centre party was elected president of the council in January 2016.

As of January 2006 the population of Normandy (including the part of Perche which lies inside the Orne département) is estimated at 3,260,000 with an average population density of 109 inhabitants per km2, just under the French national average, but rising to 147 for Upper Normandy. 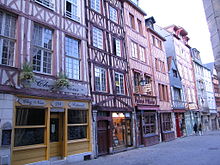