listen); Open Vld) is a Flemish conservative-liberal political party in Belgium.[4][5] The party was created in 1992 from the former Party for Freedom and Progress (PVV) and politicians from other parties. The party led the government for three cabinets under Guy Verhofstadt from 1999 until March 2008. Open VLD most recently formed the Federal Government (the so-called "Swedish government") with N-VA, CD&V and the Francophone Reformist Movement (MR).

Ideologically, Open VLD started as an economically liberal,[12] somewhat Thatcherite party under its founder, Guy Verhofstadt. The VLD rapidly became more centrist and gave up much of its free market approach, partly under the influence of Verhofstadt's political scientist brother Dirk Verhofstadt. Party chairman Bart Somers called in November 2006 for a "revolution" within the party, saying that "a liberal party", like the VLD, "can be only progressive and social".[13]

From 2000 to 2004, during the second period of its participation in the Belgian federal government and under Belgian Prime Minister Guy Verhofstadt, the VLD allegedly lost most of its ideological appeal. Several of its thinkers such as (former member) Boudewijn Bouckaert, president of Nova Civitas, heavily criticised the party. Many others resented the priority it placed on the 'Belgian compromise', which enabled the French Community's Socialist Party to gain a dominant position in the formulation of Belgian federal government policy.

In 2004, the VLD teamed up with the minority social-liberal party Vivant for both the Flemish and European elections. VLD-Vivant lost the elections to arch rivals CD&V and the Flemish Bloc. The VLD fell from second to third place among the Flemish political parties, slipping narrowly behind the sp.a-Spirit cartel. Internal feuds, the support for electoral rights for immigrants and an unsuccessful economic policy were seen as the main reasons for its election defeat. From 2007 the party kept having electoral difficulties, first due to competition from split-off List Dedecker and after 2010 from the liberal-conservative Flemish-nationalist party N-VA.

Under the presidency of chairwoman Gwendolyn Rutten, Open-Vld took on a more right-wing socio-economic course again.

As such the liberal party is the oldest political party of Belgium. In 1846, Walthère Frère-Orban succeeded in creating a political program which could unite several liberal groups into one party. Before 1960, the Liberal Party of Belgium was barely organised. The school pact of 1958, as a result of which the most important argument for the traditional anti-clericalism was removed, gave the necessary impetus for a thorough renewal. During the liberal party congress of 1961, the Liberal Party was reformed into the bilingual Party for Freedom and Progress (PVV-PLP), and Omer Vanaudenhove became the chairman of the new party. The new liberal party, which struggled with an anti-clerical image, opened its doors for believers, but wasn't too concerned about the situation of workers and primarily defended the interests of employers. It is a central principle of Classical Liberalism that employers and employees do NOT have opposed long term interests.

In the late 1960s and the early 1970s, the tensions between the different communities in Belgium rose and there were disagreements within the liberal movement as well. In 1972, the unitary PVV-PLP was split into separate a Flemish and a Francophone parties. On Flemish side, under the guidance of Frans Grootjans, Herman Vanderpoorten and Willy De Clercq, the PVV was created, on Walloon side Milou Jeunehomme became the head of the PLP and Brussels got its own but totally disintegrated liberal party landscape. Willy De Clercq became the first chairman of the independent Party of Freedom and Progress (Dutch: Partij voor Vrijheid en Vooruitgang, PVV). De Clercq, together with Frans Grootjans and Herman Vanderpoorten, set out the lines for the new party. This reform was coupled an Ethical Congress, on which the PVV adopted very progressive and tolerant stances regarding abortion, euthanasia, adultery, homosexuality and gender equality.

In 1982, the 29-year-old reformer Guy Verhofstadt became the chairman of the party, and even was Deputy Prime Minister and Minister of Budget from 1986 to 1988. Annemie Neyts succeeded him as chairman, becoming the first female party chairman. In 1989, Verhofstadt once more became the chairman of the PVV, after his party had been condemned to the opposition by the Christian People's Party (CVP) in 1987.

In 1992, the PVV was reformed into the Flemish Liberals and Democrats (Vlaamse Liberalen en Democraten, VLD) under the impulse of Verhofstadt. Although the VLD was the successor of the PVV, many politicians with democratic nationalist or socialist roots joined the new party. Notable examples are Jaak Gabriëls, then-president of the Flemish People's Union, and Hugo Coveliers. From the early 1990s, the VLD advanced in every election, only to get in government following the 1999 general election when the VLD became the largest party. Guy Verhofstadt became Prime Minister and Patrick Dewael became Minister-President of Flanders. They were both at the head of a coalition of liberals, social democrats and greens.

In the 2010 general election, Open VLD won 13 out of 150 seats in the Chamber of Representatives. After the long government formation process, on 6 December 2011 the Di Rupo Government was formed, with Open VLD one of the six constituent parties.

The party is fairly pro-European, and sits in the Renew Europe group with two MEPs.[14][15]

Then-Prime Minister Guy Verhofstadt (VLD) was rejected as a candidate for the presidency of the European Commission in June 2004.

In the European Committee of the Regions, Open VLD sits in the Renew Europe CoR group, with one full and two alternate members for the 2020-2025 mandate.[16] [17] Jean-Luc Vanraes is Coordinator in the CIVEX Commission.[18] 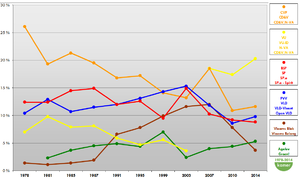 The main six Flemish political parties and their results for the Chamber of Representatives. From 1978 to 2014, in percentages for the complete 'Kingdom'.

The party is a member of the Liberal International, which was co-chaired by Annemie Neyts, member of Open VLD.