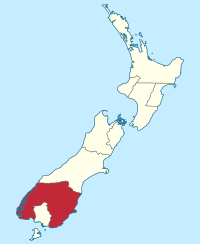 Otago Province was one of the six original provinces established in New Zealand in 1853. It covered the lower third of the South Island. Its northern neighbour was the Canterbury Province, and the boundary was the Waitaki River from the Pacific Ocean to its source in the Southern Alps, and from there a straight line to Awarua Bay (now known as Big Bay) on the west coast.[1] The inland area of the Waitaki catchment was unexplored in 1853 and dispute later arose over which branch of the Waitaki should form the boundary. The boundary was delineated in 1861 as following the Ohau River to Lake Ohau and from there a straight line to Mount Aspiring and Awarua Bay.[1]

Southland Province split from Otago in 1861, but became part of the province again in 1870.[1] All the New Zealand provinces were abolished at the end of 1876.

New Zealand law provides an anniversary day for each province.

The Otago Province had five Superintendents:[2]

The Province built the Port Chalmers Branch under the auspices of the Dunedin and Port Chalmers Railway Company Limited, and was built to the recently adopted national track gauge of 1067 mm (3 feet 6 inches), and it was the first line in the country with that gauge to open, on 1 January 1873. The first locomotive to run on the line was the E class Josephine, a double Fairlie steam locomotive, whose local popularity ensured she was retained beyond her retirement from service on the railways in 1917 and is preserved today in the Otago Settlers Museum in Dunedin.

When the Southland province amalgamated with Otago in 1870, the latter acquired the former province's railways - which were built to the standard gauge of 1,435 mm (4 feet 8.5 inches).