The Otago cricket team (nicknamed the Volts since the 1997–98 season[1]) are a New Zealand first-class cricket team formed in 1864 representing the Otago, Southland and North Otago regions. Their main governing board is the Otago Cricket Association which is one of six major associations that make up New Zealand Cricket.

The team plays most of its home games at the University Oval in Dunedin, but occasionally plays games at the Events Centre in Queenstown, Queen's Park Ground in Invercargill and Molyneux Park in Alexandra. The team mainly plays first-class, List A and Twenty20 matches against other New Zealand provincial sides, but also in the past has played touring sides.

Jacob Duffy is the Volts' current first-class, List A and Twenty20 captain.[2] He replaced Mark Craig, who was named but suffered a family bereavement and subsequent injury.[3] Their current coach is Rob Walter. 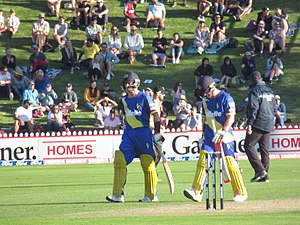 Otago Volts batsmen at the Basin Reserve in December 2019

Best Partnership for each wicket[5]

Players with international caps are listed in bold.[7][8]

University Oval is used in Dunedin, with occasional matches in Invercargill (Queen's Park) and at the Queenstown Events Centre. Many matches have been played at Molyneux Park in Alexandra in recent decades, particularly during the Christmas-New Year holiday season. The warm, dry summer climate of Central Otago can make for better cricketing conditions than the wetter coastal areas. Oamaru (Whitestone Centennial Park) has been used in the past but not recently.

A rapid expansion of Twenty20 cricket led to the creation of the Twenty20 Champions League. It was a competition between various teams from the domestic Twenty20 competitions of Australia, South Africa, Pakistan, India, England, Sri Lanka, West Indies and New Zealand.

In the 2008/09 domestic season of the State Twenty20, Otago came out as the champions, and so were eligible to compete in the inaugural Twenty20 Champions League. However, they lost both their opening games in the competition and so weren't able to progress further.

The Volts again qualified for the league in the 2013 season where they were much more successful entering the competition having won a string of Twenty20 matches which eventually ended at fifteen when they lost the Rajasthan Royals in Jaipur.