Pays de la Loire (French: [pe.i d(ə) la lwaʁ]; lit. 'Loire Lands'; Breton: Broioù al Liger) is one of the 18 regions of France, in the west of the mainland. It was created in the 1950s to serve as a zone of influence for its capital, Nantes, one of a handful of "balancing metropolises" (métropoles d'équilibre)¹.

Pays de la Loire is in western France, bordered by Brittany on the northwest, Normandy on the north, Centre-Val de Loire on the east, Nouvelle-Aquitaine on the south, and the Bay of Biscay of the North Atlantic Ocean on the southwest.

Pays de la Loire is made up of the following historical provinces:

Thus the name of the region, chosen by the French central government, was not based on history, but purely on geographical references: Pays ("lands") de la Loire ("of the Loire").

Loire Valley is a UNESCO listed World heritage Site since 2000, it is located both in the administrative regions of Pays de la Loire and Centre-Val de Loire.[2][3] Although majority of the châteaux of the Loire Valley such as Montsoreau, Angers, Saumur or Brézé in Pays de la Loire are located in the Maine-et-Loire departement,[4] Pays de la Loire has numerous prominent monuments, such as the castles of Laval, and the Nantes Château des Ducs de Bretagne, the Royal Fontevraud Abbey (the widest monastic ensemble in Europe), and the old city of Le Mans. It also has many natural parks such as the Brière and the Marsh of Poitou.

Evolution of the population listed by departments:

A steep increase in the population was seen particularly as people migrated from all over France to the Loire region due to the rise of Nantes to prominence. 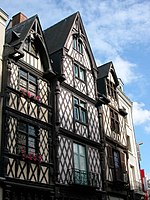 The biggest city in Pays de la Loire is Nantes, which is the sixth most populated city in France with over 315,000 people (city proper) and a metropolitan population of almost 975,000.

Angers is another metropolis of the region. It has a metropolitan population of about 400,000 and is the third biggest job provider in north-western France, just behind Nantes and Rennes.

¹ In the 1960s under the Charles de Gaulle government, eight large regional cities of France (Lille, Nancy, Strasbourg, Lyon, Nantes, Bordeaux, Marseille, Toulouse) were made "balancing metropolises", receiving special financial and technical help from the French government in order to counterbalance the excessive weight of Paris inside France.