For other people with the same name, see Peter Blake (disambiguation).

Sir Peter Thomas Blake CBE RDI RA (born 25 June 1932) is an English pop artist, best known for co-creating the sleeve design for the Beatles' album Sgt. Pepper's Lonely Hearts Club Band. His other best known works include the covers for two of The Who's albums, the cover of the Band Aid single "Do They Know It's Christmas?", and the Live Aid concert poster.[1] Blake also designed the 2012 Brit Award statuette.[2]

One of the best known British pop artists, Blake is considered to be a prominent figure in the pop art movement.[1] Central to his paintings are his interest in images from popular culture which have infused his collages. In 2002 he was knighted at Buckingham Palace for his services to art.[1]

Peter Blake was born in Dartford, Kent, on 25 June 1932. He was educated at the Gravesend Technical College school of art, and the Royal College of Art.[3] 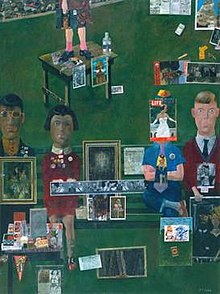 From the late 1950s, Blake's paintings included imagery from advertisements, music hall entertainment, and wrestlers, often including collaged elements. Blake was included in group exhibitions at the Institute of Contemporary Arts. In the "Young Contemporaries" exhibition of 1961 in which he exhibited alongside David Hockney and R. B. Kitaj, he was first identified with the emerging British Pop Art movement. Blake won the (1961) John Moores junior award for Self Portrait with Badges. He came to wider public attention when, along with Pauline Boty, Derek Boshier and Peter Phillips, he featured in Ken Russell's Monitor film on pop art, Pop Goes the Easel, broadcast on BBC television in 1962. From 1963, Blake was represented by Robert Fraser placing him at the centre of Swinging London and bringing him into contact with leading figures of popular culture. Blake had his first solo exhibition with Robert Fraser Gallery in 1965 and appeared on the front cover of LIFE International in a photograph by Lord Snowdon.[4]

(1955–1957) is a significant early work which remains an iconic piece of British Pop Art, showing Blake's interest in combining images from pop culture with fine art. The work, which appears to be a collage but is wholly painted, shows, among other things, a boy on the left of the composition holding Édouard Manet's The Balcony, badges and magazines. It was inspired by a painting by Honoré Sharrer depicting workers holding famous paintings, Workers and Paintings.[5] At the "Pop Art in Changing Britain" exhibit and as reported by The Telegraph on 21 February 2018, his Girls with Their Hero

, a 1959 painting of facets of Elvis Presley was said to have "fashioned a highly personal form of Pop Art, infused by nostalgia for Victoriana and a long-lost world of native pastimes". Blake has referred to the work of other artists many times. His Captain Webb Matchbox, based on a Bryant & May matchbox design featuring the first man to swim the Channel unaided, is another of his early works in the pop art movement.[1] Another example, The First Real Target

(1961) a standard archery target with the title written across the top is a play on paintings of targets by Kenneth Noland and Jasper Johns.

Blake has been commissioned to create many album sleeves. He designed the sleeve for Sgt. Pepper's Lonely Hearts Club Band with his wife Jann Haworth, the American-born artist whom he married in 1963 and divorced in 1979. The Sgt. Pepper's sleeve has become an iconic work of pop art, much imitated and Blake's best-known work. Producing the collage necessitated the construction of a set with cut-out photographs and objects, such as flowers, centred on a drum (sold in auction in 2008) with the title of the album. Blake has subsequently complained about the one-off fee he received for the design (£200[6][7]), with no subsequent royalties. Blake made sleeves for the Band Aid single, "Do They Know It's Christmas?" (1984), Paul Weller's Stanley Road (1995) and the Ian Dury tribute album Brand New Boots and Panties (2001; Blake was Dury's tutor at Walthamstow School of Art in the early 60s). He designed the sleeves for Pentangle's Sweet Child, The Who's Face Dances (1981), which features portraits of the band by a number of artists, and 38 years later, The Who's WHO (2019).

In 1969, Blake left London to live near Bath. His work changed direction to feature scenes based on English Folklore and characters from Shakespeare. In the early 1970s, he made a set of watercolour paintings to illustrate Lewis Carroll's Through the Looking-Glass using a young artist, Celia Wanless, as the model for Alice and in 1975 he was a founder of the Brotherhood of Ruralists. Blake moved back to London in 1979 and his work returned to earlier popular culture references.

In 1990 and 1991, Blake painted the artwork to Eric Clapton's 1991 million-selling live album 24 Nights. A scrapbook featuring all of Blake's drawing was later released. In January 1992, Blake appeared on BBC2's acclaimed Arena Masters of the Canvas documentary and painted the portrait of the wrestler Kendo Nagasaki.[8]

In June 2006, as The Who returned to play Leeds University 36 years after recording their seminal Live at Leeds album in 1970, Blake unveiled a Live at Leeds 2 artwork to commemorate the event. The artist and The Who's Pete Townshend signed an edition which will join the gallery's collection. More recently, Blake has created artist's editions for the opening of the Pallant House Gallery which houses collections of his most famous paintings. The works are homages to his earlier work on the Stanley Road album cover and Babe Rainbow prints. He designed a series of deck chairs.

In 2006, Blake designed the cover for Oasis greatest hits album Stop the Clocks. According to Blake, he chose all of the objects in the picture at random, but the sleeves of Sgt. Pepper's and Definitely Maybe were in the back of his mind. He claims, "It's using the mystery of Definitely Maybe and running away with it." Familiar cultural icons which can be seen on the cover include Dorothy from Wizard of Oz, Michael Caine (replacing the original image of Marilyn Monroe, which could not be used for legal reasons) and the seven dwarfs from Snow White and the Seven Dwarfs. Blake revealed that the final cover wasn't the original which featured an image of the shop 'Granny Takes a Trip' on the Kings Road in Chelsea, London.

Blake created an updated version of Sgt. Pepper—with famous figures from Liverpool history—for the campaign for Liverpool to become European Capital of Culture in 2008, and created a series of prints to celebrate Liverpool's status.[9] In 2008, Blake painted a pig for the public art event King Bladud's Pigs in Bath in the city of Bath.[10]

A fan of Chelsea Football Club, Blake designed a collage to promote the team's home kit in 2010. He also designed a shopping bag for the Lucky Brand Jeans company for the holiday season.

As part of 'The Big Egg Hunt' February 2012 Sir Peter Blake designed an egg on behalf of Dorchester Collection. Blake created the carpet which runs through the Supreme Court of the United Kingdom's Middlesex Guildhall building.[11]

As he approached his 80th birthday, Blake undertook a project to recreate the Sgt. Pepper album cover with images of British cultural icons of his life that he most admires.[12] He stated: "I had a very long list of people who I wanted to go in but couldn't fit everyone in – I think that shows how strong British culture and its legacy of the last six decades is."[12][13] The new version was created for a special birthday celebration of Blake's life at fashion designer Wayne Hemingway's Vintage festival at Boughton House, Northamptonshire in July 2012.[12]

An exhibition was held at Pallant House Gallery in Chichester to celebrate the artist's long associations with music called Peter Blake and Pop Music (23 June to 7 October 2012).[14] In 2014, he exhibited his illustrations inspired by Under Milk Wood at National Museum Cardiff.[15] In 2016, Blake designed the artwork for Eric Clapton's studio album I Still Do.

In March 2020, Blake's poster London Stands Together was distributed in every copy of London's Evening Standard newspaper. [16]

Blake became a Royal Academician in 1981. He was appointed Commander of the Order of the British Empire in the 1983 Birthday Honours and Knight Bachelor in the 2002 Birthday Honours for his services to art.[17][18] Blake was knighted by Prince Charles in an investiture ceremony at Buckingham Palace.[1] Retrospectives of Blake's work were held at the Tate in 1983 and Tate Liverpool in 2008.[19] In February 2005, the Sir Peter Blake Music Art Gallery, located in the School of Music, University of Leeds, was opened by the artist. The permanent exhibition features 20 examples of Blake's album sleeve art, including the only public showing of a signed print of his Sgt. Pepper's artwork.

Blake has lived in Chiswick, London, since 1967.[3] His "vast" studio there is a former ironmonger's warehouse.[23]