For the engineer, see Philippe Lebon.

Philip the Good (French: Philippe le Bon; Dutch: Filips de Goede; 31 July 1396 – 15 June 1467) was Duke of Burgundy from 1419 until his death. He was a member of a cadet line of the Valois dynasty, to which all 15th-century kings of France belonged. During his reign, the Burgundian State reached the apex of its prosperity and prestige, and became a leading centre of the arts. Philip is known in history for his administrative reforms, his patronage of Flemish artists such as van Eyck and Franco-Flemish composers such as Guillaume Du Fay, and the capture of Joan of Arc. In political affairs, he alternated between alliances with the English and the French in an attempt to improve his dynasty's powerbase. Additionally, as ruler of Flanders, Brabant, Limburg, Artois, Hainaut, Holland, Luxembourg, Zeeland, Friesland and Namur, he played an important role in the history of the Low Countries.

Born in 1396 in Dijon, Philip was the son of John the Fearless and Margaret of Bavaria.[1] His father succeeded Philip's grandfather Philip the Bold as Duke of Burgundy in 1404.[2] On 28 January 1405, Philip was named Count of Charolais in appanage of the duke and probably became engaged on the same day, at the age of 8, to Michelle of Valois, a daughter of King Charles VI of France. They were married in June 1409.[3]

After Michelle's death in 1422, Philip married Bonne of Artois,[3] a daughter of Philip of Artois, Count of Eu, and also the widow of his uncle, Philip II, Count of Nevers, in Moulins-les-Engelbert on 30 November 1424. Bonne of Artois is sometimes confused with Philip's biological aunt, also named Bonne (a sister of John the Fearless who lived from 1379 to 1399), in part due to the papal dispensation required for the marriage, which made no distinction between a marital aunt and a biological aunt. Bonne of Artois lived only a year after Philip married her.

Philip was married for a third time to Isabella of Portugal, a daughter of John I of Portugal and Philippa of Lancaster, in Bruges on 7 January 1430,[4] after a proxy marriage the year before. This marriage produced three sons:[5]

Philip also had at least eighteen illegitimate children by 24 documented mistresses, of whom these are the best known:

Corneille and Anthony were his favourite bastard sons and successively bore the title Grand bâtard de Bourgogne (first Corneille and after his death, Anthony).

Early rule and alliance with England

Philip became duke of Burgundy and count of Flanders, Artois and Franche-Comté upon the assassination of John the Fearless, his father, in 1419.[9] Philip accused Charles, the Dauphin of France and Philip's brother-in-law, of planning the murder, which took place during a meeting between John and Charles at Montereau. Because of this, he continued to prosecute the Armagnac–Burgundian Civil War, which in turn became entangled in the larger Hundred Years' War. In 1420, Philip allied himself with Henry V of England under the Treaty of Troyes. In 1423, the marriage of Philip's sister Anne to John, Duke of Bedford, regent for Henry VI of England, strengthened the English alliance.[citation needed]

On 23 May 1430, Philip's troops under the Count of Ligny captured Joan of Arc at Compiègne[10] and later sold her to the English,[11] who orchestrated a heresy trial against her conducted by pro-Burgundian clerics. Despite this action against Joan of Arc, Philip's alliance with England was broken in 1435 when he signed the Treaty of Arras, which completely revoked the Treaty of Troyes and recognised Charles VII as king of France. Philip signed the treaty for a variety of reasons, one of which may have been a desire to be recognised as the preeminent duke in France.

This action would prove a poor decision in the long term; Charles VII and his successors saw the Burgundian State as a serious impediment to the expansion of royal authority in France, and for this reason they would permanently try to undermine Burgundy, so as to subordinate it to French sovereignty.[12] Philip's defection to the French would prove not only catastrophic to the dual monarchy of England and France, but to his own domains as well, subordinating them to a powerful centralised Valois monarchy.

He then attacked Calais, a strategic possession of the English, but the alliance with Charles was broken in 1439. Philip supported the revolt of the French nobles the following year (an event known as the Praguerie) and offered shelter to the Dauphin Louis, who had rebelled against his father Charles VII.[citation needed]

Philip was generally preoccupied with matters in his own territories and was seldom involved directly in the Hundred Years' War between England and France, although he did play a role during a number of periods, such as the campaign against Compiègne during which his troops captured Joan of Arc. He incorporated Namur into Burgundian territory in 1429 (by purchase, from John III, Marquis of Namur) and Hainault and Holland, Friesland and Zeeland in 1432 with the defeat of Jacqueline, Countess of Hainault, in the last episode of the Hook and Cod wars. He inherited the Duchies of Brabant and Limburg and the Margraviate of Antwerp in 1430 on the death of his cousin Philip of Saint-Pol and purchased Luxembourg in 1443 from Elisabeth of Bohemia, Duchess of Luxembourg.

In 1456, Philip also managed to ensure his illegitimate son David was elected Bishop of Utrecht and his nephew Louis de Bourbon elected Prince-Bishop of Liège. It is not surprising that in 1435 Philip began to style himself the "Grand Duke of the West".

In 1463, Philip gave up some of his territory to Louis XI of France. That year he also created an Estates-General for the Netherlands based on the French model. The first meeting of the Estates-General was to obtain a loan for a war against France and to ensure support for the succession of his son Charles I to his now vast dominions. In 1465 and 1467, Philip crushed two rebellions in Liège before dying a few weeks later after the latter insurrection.

Court life and patron of the arts 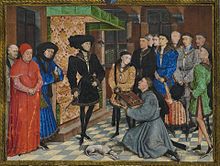 Rogier van der Weyden miniature 1447–48. Philip dresses his best, in an extravagant chaperon, to be presented with a History of Hainault by the author, Jean Wauquelin, flanked by his son Charles and his chancellor Nicolas Rolin.

Philip's court can only be described as extravagant. Despite the flourishing bourgeois culture of Burgundy, with which the ducal court kept in close touch, he and the aristocrats who formed most of his inner circle retained a world-view dominated by the ideas and traditions of chivalry. He declined membership in the Order of the Garter in 1422, which would have been considered an act of treason against the king of France, his feudal overlord. Instead, he created his own Order of the Golden Fleece, based on the Knights of the Round Table and the myth of Jason, in 1430. In time his order would become the most prestigious and historic of all knightly orders of chivalry in all of Europe.

Philip had no fixed capital (seat of government) and moved the court between various palaces, the main urban ones being in Brussels, Bruges, and Lille. He held grand feasts and other festivities, and the knights of his Order frequently travelled throughout his territory to participate in tournaments. In 1454, Philip planned a crusade against the Ottoman Empire, launching it at the Feast of the Pheasant, but this plan never materialized. In a period from 1444 to 1446, he is estimated to have spent a sum equivalent to 2% of Burgundy's main income in the recette génerale, with a single Italian supplier of silk and cloth of gold, Giovanni di Arrigo Arnolfini.[13] 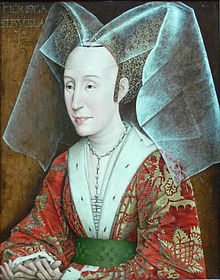 Portrait of Isabella of Portugal from the workshop of Rogier van der Weyden, c. 1445–1450

Philip's court was regarded as the most splendid in Europe by his contemporaries, and it became the accepted leader of taste and fashion, which probably helped the Burgundian economy considerably, as Burgundian (usually Flemish) luxury products became sought by the elites across Europe. During his reign, for example, the richest English commissioners of illuminated manuscripts moved away from English and Parisian products to those of the Netherlands, as did other foreign buyers. Philip himself is estimated to have added six hundred manuscripts to the ducal collection, making him by a considerable margin the most important literary patron of the period.[14] Jean Miélot, one of his secretaries, translated into French such works as Giovanni Boccaccio's Genealogia Deorum Gentilium which is good example of the sophistication of Philip's court.

Philip was also a considerable patron of other arts, aside from literature. He commissioned many tapestries (which he tended to prefer over oil paintings), pieces from goldsmiths, jewellery, and other works of art, including numerous mechanical automata and fountains at the Chauteau of Hesdin.[15]It was also during his reign that the Burgundian chapel became the musical centre of Europe, with the activity of the Burgundian School of composers and singers. Esteemed composers such as Gilles Binchois, Robert Morton, and later Guillaume Dufay were all part of Philip's court chapel.

In 1428, van Eyck travelled to Portugal to paint a portrait of the daughter of King John I, the Infanta Isabella, personally for Philip in advance of their marriage. With help from more experienced Portuguese shipbuilders, Philip established a shipyard in Bruges, which helped commerce flourish.

Rogier van der Weyden painted his portrait twice on panel, of which only copies survive, wearing the collar of the Order of the Golden Fleece. The only original van der Weyden of Philip to survive is a superb miniature from a manuscript (above right).[14] The painter Hugo van der Goes of the Early Netherlandish school is credited with creating paintings for the church where Philip's funeral was held.