A police station (sometimes called a "station house") is a building which serves to accommodate police officers and other members of staff. These buildings often contain offices and accommodation for personnel and vehicles, along with locker rooms, temporary holding cells and interview/interrogation rooms.[citation needed] 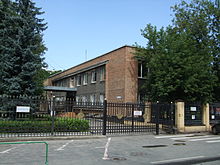 Large departments may have many stations to cover the area they serve. The names used for these facilities include:

Multiple informal names exist, such as "cop shop", "cophouse" or (in the UK) "nick".

The area a police station serves has a variety of different names, such as precinct, district, division and zone. However, in some police forces such as Hampshire Constabulary, police stations do not serve a specific area and the officers have great flexibility over where they can operate.

Specialized stations exist in a number of countries, typically containing more or less of these facilities. An example includes women's police stations in Latin America.

Police station in India have designated area under their jurisdiction. Police stations are headed by a station house officer (SHO) who may be of inspector or sub-inspector rank, assisted by an assistant sub-inspector, head constables, and constables. The number of personnel in a particular police station depend on many factors like area covered, population, topography, crime rate, sensitivity, important places and others. Some police stations may have police outposts under them. Police outposts are set up when areas covered by police station is very large, difficult topography, lack of transportation, high density of population, communally sensitive places and border points.[1] There are many police stations in India which lack basic infrastructure like proper building, landline telephones, wireless sets, vehicles, computers and adequate police personnel.[2][3] Specialized police stations also exist for specific purposes, such as cyber crime, railway, traffic enforcement, women, and others.

The police stations (or barracks) of the Garda Síochána come in the following types, in ascending order of size:

The county constabularies in Great Britain were previously organised on a village basis. Most villages of any size had a "police house". Police houses in small villages were often staffed by a single uniformed constable, with larger stations being staffed by more. Local police stations were grouped together under the command of a uniformed sergeant, whose station was known as a "sergeant's station". Larger towns in the county constabulary areas had police stations staffed by a number of officers, often under the command of an inspector or superintendent, usually also commanding a sub-division or division respectively, and therefore giving the names of "sub-divisional station" or "divisional station" to their stations.

In Scotland a police station may be referred to as a police office.[citation needed]

As well as traditional, staffed, police stations, there are a number of kiosks in Dubai allowing instant access to police services via a video touchscreen.