The Port of Zeebrugge (also referred to as the Port of Bruges or Bruges Seaport) is a large container, bulk cargo, new vehicles and passenger ferry terminal port on the North Sea. The port is located in the municipality of Bruges, West Flanders in the Flemish Region of Belgium, handling over 50 million tonnes of cargo annually.[3]

Satellite image of Bruges and the Port

The port of Zeebrugge is managed by the port authority MBZ (Maatschappij van de Brugse Zeehaven - translated: 'Company of the Bruges Seaport'), an autonomous company regulated by public law, the city of Bruges being the main shareholder. 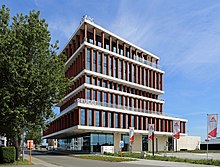 The cruise terminal of Zeebrugge

The port has become a major European port since major development works were carried in the 1972 to 1985 period. Since then total tonnage has doubled. As of 2008, Bruges-Zeebrugge is one of the fastest growing ports between Le Havre and Hamburg.[4] It is Europe's leading RoRo port, handling 12.5 million mt in 2010, and the world's largest port for imports and exports of new vehicles, with over 1.6 million units handled in 2010 (24.5% less than in 2008 due to the economical crises). It is also Europe's largest terminal for liquefied natural gas (LNG),[5] receiving natural gas from the Troll gas field via the 814 km long Zeepipe under the North Sea. LNG is also delivered in specialized gas tankers from various origins, like Africa, Australia or the Middle East. Zeebrugge counts as one of the most important ports in Europe for containerized cargo as well, handling over 2.5 million TEUs in 2010.

The port employs directly over 11,000 people and handles over 10,000 ship moorings annually. Together with the indirect employees, the port creates over 28,000 jobs.

The most important functions of the port are:

Advantages of the port

The port complex of Bruges-Zeebrugge offers several main assets, which will allow volumes to develop even further in the years to come, namely,

The following ferry operators operate regular scheduled, international routes to and from Zeebrugge.

View on the eastern dam of the Port of Zeebrugge, Brugge, seen from the beach of Heist, Knokke-Heist.