President of the European Council

On 19 November 2009, the European Council agreed that its first president under the Lisbon Treaty would be Herman Van Rompuy (European People's Party). Van Rompuy took office when the Lisbon Treaty came into force on 1 December 2009 with a term stretching until 31 May 2012.[3] His term was later extended with a second period ending on 30 November 2014.

The first president was expected to define the role for future office holders, as there was no clear idea of how the post would evolve.[11] One body of thought was that the president would stick to the administrative role as outlined by the treaty, a standard bearer who would simply chair meetings and ensure the smooth running of the body and its policies. This would attract semi-retired leaders seeking a fitting climax to their career and would leave most work to the Commission rather than wield power within the institutions.[12] However another opinion envisaged a more pro-active president within the Union and speaking for it abroad. The office would hence be quickly fashioned, according to promoters, into a de facto "president of Europe" and, unlike the first model, would be seen on the world stage as speaking for the EU. Persons connected to this position would be more charismatic leaders.[10] The appointment of Herman Van Rompuy indicated a desire to see the former style of president.

The Treaty of Lisbon does not define a nomination process for the president of the Council and initially several official and unofficial candidates were proposed. At the final European Council meeting on the treaty in Lisbon, on 19 November 2007, French president Nicolas Sarkozy set off public speculation on candidates by naming Tony Blair, Felipe González and Jean-Claude Juncker, and praising the three as worthy candidates[13] with Blair in particular being a long time front runner for the post. However, he faced large scale opposition for being from a large state outside the eurozone and the Schengen Area as well as being a leader who entered the Iraq War which had split Europe. Minor opposition to other leaders such as Juncker also led to their rejection.[citation needed]

On 19 November 2009, Herman Van Rompuy, at that time Prime Minister of Belgium, was appointed the first full-time president of the European Council. The formal decision on the appointment was made after the Treaty of Lisbon came into force on 1 December 2009.[14] The British prime minister, Gordon Brown, said that he had unanimous backing from the 27 EU leaders at the summit in Brussels on the evening of 19 November 2009. Brown praised Van Rompuy as "a consensus builder" who had "brought a period of political stability to his country after months of uncertainty".[15] At a press conference after his appointment, Van Rompuy commented: "Every country should emerge victorious from negotiations. A negotiation that ends with a defeated party is never a good negotiation. I will consider everyone's interests and sensitivities. Even if our unity remains our strength, our diversity remains our wealth", he said, stressing the individuality of EU member states.[16]

The role as President-in-Office was merely a primus inter pares role among other European heads of state or government. However, the president-in-office represented the European Council externally and reported to the European Parliament after its meetings as well as at the beginning and at the end of the presidency.[17][18] 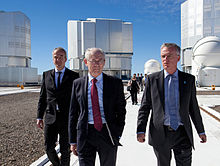 President of the European Council, Herman Van Rompuy, during a visit to the Paranal Observatory.[19]

Formal negotiations on the salary and privileges of the permanent presidency began in April 2008 as part of the draft of the 2009 EU budget. The outcome was that the president should enjoy the same conditions as the president of the Commission, with a basic salary of 138% of the highest civil service grade: that would be €24,874.62 per month (not including family and other allowances).[26][27][28][needs update]

The president receives a chauffeured car and around 20 dedicated staff members. He also has a housing allowance, rather than an official residence which was considered "too symbolic". Likewise, the idea of a private jet was also rejected for being symbolic and, as one diplomat pointed out, a discrepancy in privileges between the European Council and Commission presidents may only fuel rivalry between the two.[29]

The possibility of there being greater perks for the European Council president than Commission president prompted Parliament to threaten a rejection of the 2009 budget. It saw a large salary and extras as a symbolic signal that the post is intended to become more powerful, increasing intergovernmentalism at the Parliament's expense. With some in the Council suggesting a staff of up to 60, the Committee on Constitutional Affairs has indicated it may drop the gentlemen's agreement that Parliament and Council will not interfere in each other's budget.[30]

Although the European Council is, under the terms of the Lisbon treaty, a separate institution of the EU, it does not have its own administration. The administrative support for both the European Council and its President is provided by the General Secretariat of the Council of the European Union. The president does have, however, his own private office (cabinet) of close advisers. Van Rompuy chose as his first chief of staff (chef de cabinet) Baron Frans van Daele, formerly Belgian ambassador to, variously, the US, the UN, the EU and NATO and chief of staff of several Belgian foreign ministers. Upon his retirement in the autumn of 2012, Didier Seeuws, former Deputy Perm Rep of Belgium to the EU and former spokesman for Belgian PM Verhofstadt, replaced him. Also in his team were the former UK Labour MEP Richard Corbett and Van Rompuy's long standing press officer Dirk De Backer. The head of Donald Tusk's cabinet is Piotr Serafin.

The lack of accountability to MEPs or national parliamentarians has also cast doubt as to whether national leaders will in practice stand behind the president on major issues.[21] Under the rotational system, the presidents simply had the mandate of their member states, while the new permanent president is chosen by the members of the European Council.[31]

There have been calls by some, such as former German interior minister and current head of the Bundestag Wolfgang Schäuble,[32] for direct elections to take place to give the President a mandate, this would strengthen the post within the European Council allowing for stronger leadership in addition to addressing the question of democratic legitimacy in the EU. However, this might cause conflict with Parliament's democratic mandate or a potential mandate for the Commission (see section below). To give a mandate to the European Council's president would signify a development of the Union's governance towards a presidential system, rather than a parliamentary system.[31]

There had been disagreement and concern over competition between the former president of the European Council Van Rompuy and the former Commission president Barroso due to the vague language of the treaty. Some clarifications saw Van Rompuy as the "strategist" and Barroso as a head of government. In terms of economic policy, Van Rompuy saw the European Council as dealing with overall strategy and the Commission as dealing with the implementation. Despite weekly breakfasts together there was a certain extent of rivalry between the two yet-defined posts.[33][22][34]

Since the creation of the European Council presidency, former president Van Rompuy and former Commission President Barroso had begun to compete with each other as Van Rompuy had benefited from the general shift in power from the Commission to the European Council yet with Barroso still holding the real powers. At international summits they continued previous practice of both going at the same time. The complicated situation had renewed some calls to merge the posts, possibly at the end of Barroso's term in 2014. However some member states had expected to oppose the creation of such a high-profile post.[33][34]