Not to be confused with Ramsey, Minnesota.

Ramsey County is a county located in the U.S. state of Minnesota. As of the 2010 census, the population was 508,640,[2] making it the second-most populous county in Minnesota. Its county seat and largest city is Saint Paul,[3] the state capital. The county was founded in 1849 and is named for Alexander Ramsey, the first governor of the Minnesota Territory.[4]

With the establishment of the Minnesota Territory in 1849, nine counties, including Ramsey County, were created. In 1849, Ramsey County included all of what later became the present-day counties of Ramsey, Anoka, Isanti, and Kanabec; and part of Washington, Pine, Carlton, Aitkin, Mille Lacs, and Hennepin. One of Ramsey County's early settlers was Heman Gibbs, whose farm is now operated as the Gibbs Museum of Pioneer and Dakotah Life (Gibbs Farm[7]) in Falcon Heights. Ramsey County remained largely farmland until small villages began to appear in the late 19th century, with the incorporation of North St. Paul in 1887, New Brighton in 1891, and White Bear Lake in 1921.[8]

Ramsey County is overwhelmingly Democratic in presidential elections, having not voted for a Republican presidential candidate since 1924. In 2020, Democratic nominee Joe Biden received the largest share of the vote for any candidate in the county’s history, with over 71%.

The current sheriff is Bob Fletcher, who won the general election for Ramsey County Sheriff on November 6, 2018.

Providing safety in Ramsey County is a collaborative effort across multiple agencies. The Ramsey County Sheriff's office provides a number of unique services across the county as mandated by law. This includes detention for court and other court services. This also includes safety, rescue and law enforcement on the waterways.

The sheriff's office provides patrol and investigation for communities without local police forces and is available as backup for all communities. An emergency 911 call will send the appropriate agency according to the caller's location and law enforcement availability.

The county commission elects a chair who presides at meetings. Commissioners as of November 20, 2019:

Ramsey County is served by several interstate highways, including Interstate 35 and Interstate 94. I-35 has two routes through Ramsey County. I-35E enters the county from Dakota County to the south and proceeds north through Saint Paul, where it intersects I-94, then continues north to Little Canada, where it runs east concurrently with I-694 for several miles before turning north through North Oaks to Washington County. I-35W crosses from Minneapolis to the west through Saint Anthony before turning north through New Brighton, where it intersects I-694, and then to Anoka County where it goes on to rejoin I-35E in Washington County.[13]

Ramsey County is also accessible by several U.S. Highways, in particular US 10, US 52, and US 61. US 10 enters from Washington County in the south and continues north to meet I-94 just east of Saint Paul where it turns west to run concurrently with I-94, I-35E, I-694, and finally I-35W before continuing northwest to Anoka County. US 52 runs from South Saint Paul in Dakota County north to downtown Saint Paul where it meets I-94 and turns west to run concurrently with it all the way to the North Dakota border. From the south, US 61 runs concurrently with US 10 and then I-94 until it continues northeast on surface streets through the East Side of Saint Paul. From Saint Paul, US 61 continues north through Maplewood and White Bear Lake before crossing the border into Washington County.[13]

In addition to these federal highways, Ramsey County is served by a number of Minnesota State Highways, including MN 36 and MN 51 which are divided highways for much of their length.[13]

The county also has jurisdiction over 264.108 miles of County State Aid Highways as well as 21,031 miles of county roads and 59 bridges that are maintained and monitored by the Public Works Department of Ramsey County.[14]

Ramsey County is a major freight hub along BNSF's Northern Transcon route, as well as being served by Union Pacific and Canadian Pacific.[15] 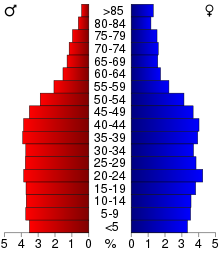 Age pyramid of county residents based on 2000 U.S. census data