Ravensbourne is a suburb of the New Zealand city of Dunedin. It is located on Otago Harbour on the steep southeastern slopes of Signal Hill. It lies on the harbour's northern shore, 4.5 kilometres (2.8 mi) east-northeast of the city centre. As of 2001[update]

Ravensbourne had a population of 1,269.

Location of Ravensbourne (shown by red dot) within Dunedin. The railway causeways at Burkes can be clearly seen to the northeast. 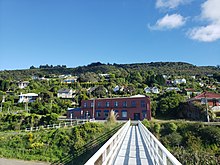 View of Ravensbourne from the railway bridge

Rail and road links between central Dunedin and Port Chalmers run through Ravensbourne on the narrow strip of land between the hill slopes and harbour. A cycleway lies close to the harbour's edge, close to the rail line. Beginning in the final years of the twentieth century, this cycleway has extended to link many of the settlements along Otago Harbour's western shore. It begins close to the Forsyth Barr Stadium in North Dunedin, where it connects with Dunedin's cycleway network, and as of 2021[update]

extends as far as St Leonards. Construction is underway to complete a link between St Leonards and Port Chalmers.

The suburb is mainly residential, but is dominated by two large industrial plants, the Logan Point Quarry and the Ravensdown Fertiliser factory, which is located at the harbour's edge at the southern end of the suburb. Ravensdown has 25,062 shareholders and operates over 90 stores throughout New Zealand. Ravensdown has many partnerships including spreading companies such as Spreading Sandfords, Spreading Northland, and Spreading FBT.

Ravensbourne contains a significant number of smaller homes, quite a number of them occupied as flats by students from the University of Otago and Otago Polytechnic, which lie 2 kilometres (1.2 mi) to the west. The suburb clusters around the Dunedin-Port Chalmers highway (State Highway 88), and numerous narrow winding roads which climb the hill to its northwest. Above the suburb is Burns Park Scenic Reserve, which occupies much of the upper slopes of Signal Hill.

Ravensbourne and the nearby suburbs of Maia, Burkes, and Saint Leonards, are often collectively referred to as West Harbour. Under this name, the area operated as a separate borough from 1877 until amalgamation with the city of Dunedin in 1963.

Ravensbourne takes its name from the property of the first mayor of West Harbour, Thomas De Lacy, who served as mayor from 1877 to 1878. In the area of De Lacy's property weka abounded, whose cockiness reminded De Lacy of the ravens in his native Scotland. The Māori name for the area is Kaitaki Tamariki, though this is rarely used[by whom?] as of 2020[update]

The smaller settlements of Maia and Burkes lie on the coast of the harbour immediately to the northeast of Ravensbourne. Maia, basically a suburb of Ravensbourne, lies 1 kilometre (0.62 mi) to the northeast. Its name and the pronunciation of it mean that it is often mistaken for a Māori name, though it was actually named for the Greek mythological daughter of Atlas, one of the Pleiades.

Burkes lies to the northeast of Maia, and consists of one long narrow road running roughly parallel with and above the highway. The most notable feature of Burkes is that the South Island Main Trunk railway crosses a series of causeways spanning some of the small bays which run along the harbour's edge.

North of Burkes lies the larger settlement of Saint Leonards, which the early settler David Carey named for the English town of St Leonards-on-Sea (on the Sussex coast) - the birthplace of his wife.[1][2]

Ravensbourne and Maia appear in this view from Shiel Hill on the southern side of Otago Harbour. One of the railway causeways at Burkes is visible at the far right. The television transmitter on the top of Mount Cargill is visible behind Signal Hill in the background.