Finland is divided into 19 regions (Finnish: maakunta; Swedish: landskap)[a] The regions are governed by regional councils, which serve as forums of cooperation for the municipalities of a region. The main tasks of the regions are regional planning and development of enterprise and education. In addition, the public health services are usually organized on the basis of regions. Between 2004 and 2012, the only region where a popular elections for the council were held was Kainuu as part of an experimental regional administration.[2] Currently the regional councils are elected by municipal councils, each municipality sending representatives in proportion to its population. The Government of Finland is in the process of establishing elected regional councils by 2022 through a health and social services reform.[3] In the process the official English name for the administrative unit will be changed from region to county, while the Finnish and Swedish names will be kept intact.[4]

One region, Åland, has a special status and has a much higher degree of autonomy than the others, with its own Parliament and local laws, due to its unique history and the fact that the overwhelming majority of its people are Finland Swedes. The sole language of Åland is Swedish/Finland Swedish, unlike the rest of the country where Finnish and Swedish share official status. It has its own elected head of government who carries the title of Premier and heads the Lantrad, the regional executive. Most powers that would be exercised by the Government of Finland on the mainland are instead exercised by Åland-specific authorities which execute independent policy in most areas. The Åland islanders elect a single representative to the national legislature, while the Government of Finland appoints a Governor to represent the national government on Åland. Åland is a demilitarised zone and Åland islanders are exempt from conscription.

Representation of the state

In addition to inter-municipal cooperation, which is the responsibility of regional councils, there are 15 Centres for Economic Development, Transport and the Environment (Finnish: elinkeino-, liikenne- ja ympäristökeskus, abbreviated ely-keskus), which is responsible for the local administration of labour, agriculture, fisheries, forestry and entrepreneurial affairs. They are each responsible for one or more of regions of Finland, and include offices of the Ministries of Employment and the Economy, Transport and Communications and Environment. The Finnish Defence Forces regional offices are responsible for the regional defence preparations and for the administration of conscription within the region. 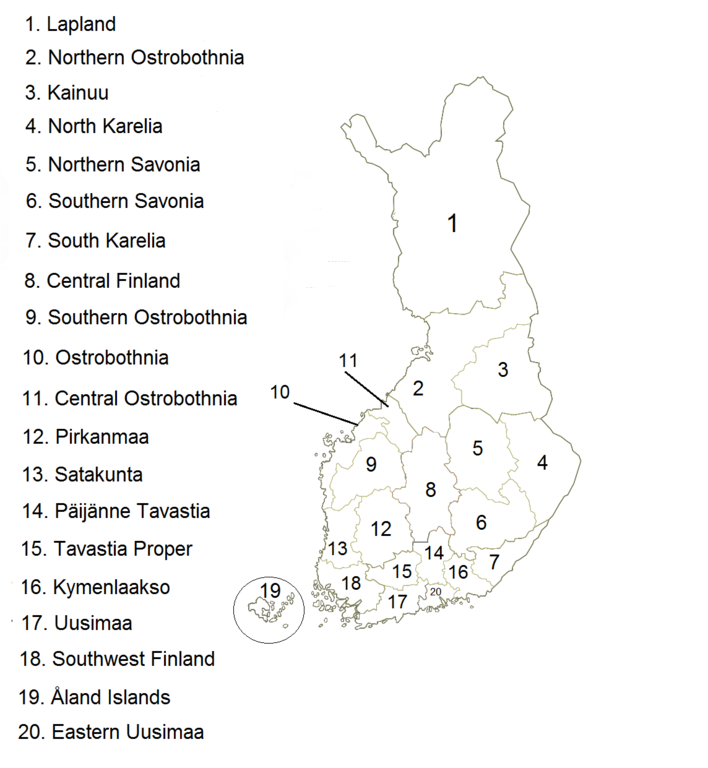