Richfield is a city in Hennepin County, Minnesota, United States. An inner-ring suburb of the Minneapolis–Saint Paul region, it is bordered by Minneapolis to the north, Minneapolis–Saint Paul International Airport to the east, Bloomington to the south, and Edina to the west. Best Buy, the U.S.'s largest electronics retailer, has its headquarters in Richfield. The population was 35,228 at the 2010 census.[6] 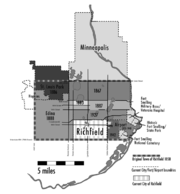 In the 1820s, some small settlements developed around Fort Snelling. By the late 1830s, the fortress served as a destination for newcomers—lumbermen, missionaries, farmers, traders and travelers—migrating to the borderlands people were now calling "Minisota."[7] Minnesotan Franklin Steele first reached the area in 1837 where he worked as a sutler, selling goods to soldiers.[8]

Fort Snelling's garrison made up the bulk of the area's population,[9] along with Henry Sibley and Alexander Faribault's seventy-five person American Fur Company operation. Other small settlements of traders, farmers, missionaries and refugees began to develop outside the walls of the fort, some with permission, some without. These residents built communities on land that would become known as Richfield.

The fields of Richfield proved bountiful for the settlers. Early crops included corn, wheat and oats. Wheat immediately became the “cash” crop, sold in the area's first major market, St. Paul. Those in the southern parts of Hennepin County found it more profitable to haul their wheat crop to St. Paul than to the St. Anthony Falls district. This occurred in the days before “King Wheat” and the evolution of Minneapolis into a milling center.[10]

Minneapolis became a favorite trading point for market gardeners in 1897 with the building of the modern, covered Second Street Market just two blocks west of Hennepin Avenue and Bridge Square. The market featured a massive platform for gardeners, including Richfield's sizable contingent, to unload and display produce. The new system freed streets from traffic snarls by allowing each person to unhitch and put up their horses, while their wagon was backed into an assigned space. Wholesale customers could then bring their teams to the platform and start negotiating prices when the starting bell sounded.[11]

One of the first settlers to the area was Riley Bartholomew, a former general in the Ohio Militia. He became a Richfield Justice of the Peace and a Minnesota State Senator. Bartholomew built a house on the east shore of Wood Lake in 1852, and the restored Riley Lucas Bartholomew House is listed on the National Register of Historic Places. Today, the house and site are maintained by the Richfield Historical Society.

The Harmony post office, south of the Richland Mill on today's Lyndale Avenue, opened in 1854. Postmaster James Dunsmoor named the mail center after his hometown in Maine.[12] Richfield farmers looked on the metropolis to its north as their marketing target. They helped supply its restaurants, hotels, grocers and citizens with fresh produce, with enough left over to ship by railroad to other cities.[13]

On May 11, 1858, the Territory of Minnesota received approval from Congress to become the thirty second state to join the union. That same day, local citizens met in a schoolhouse at present-day 53rd and Lyndale, to form a municipal government. At that first meeting of the town electors, those who previously referred to themselves as living in Harmony or Richland Mills chose the name of Richfield for their community.[14][15]

Settlers from Maine made up 35 percent of the total number of U.S.-born adults (eighteen years old or older) in 1860 Richfield. New York immigrants, at 21 percent, were a notable but distant second. Immigrants from Ireland, numbering 58, represented half of the 119 adults from other nations. Just three of Richfield's citizens had been born in Minnesota.[16]

Today's boundaries differ markedly from those originally set forth on April 10, 1858, by the Hennepin County Board of Commissioners when they established the towns of Richfield, Minneapolis, Bloomington and Eden Prairie. The boundaries of Richfield included about sixty-three square miles. Richfield originally ranged to Minneapolis's Lake Street on the north, to what is now Highway 169 on the west, to Bloomington on the south, and to Fort Snelling and the Minnesota and Mississippi rivers on the east.[17]

Parts of Richfield were later lost to neighboring towns or villages through annexation. An 1886 partition of Richfield created the village of St. Louis Park, and a later division approved April 5, 1889, produced the village of Edina. Minneapolis absorbed sizeable portions of Richfield territory through legislative action or annexations in 1867, 1883, 1887 and 1927. The growth of Twin Cities International Airport during the last half of the twentieth century along with additions of land to the Fort Snelling compound meant further reductions.[18] 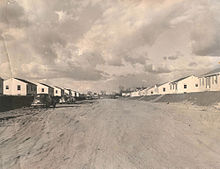 Housing development along Washburn Avenue, circa 1950

In 1908 that Richfield became a village. From 1908 until 1950, Richfield's local government consisted of a president, three trustees, and a city clerk. On November 7, 1950, residents voted for a city manager form of government, meaning the city had a Mayor, four council members, and one City Manager. This is still the form of government used today. Richfield's first mayor was Clarence Christian, who began serving in 1951, but served as president under the old format dating back to 1948. By the late 1940s, the city's population started increasing rapidly as farmland was sold to developers who were building homes for veterans returning from World War II. In 1955, the Richfield Chamber of Commerce was formed and has been deeply involved in the development, as well as the redevelopment, of the community since that time.[19]

Over the years, populations of all nearby communities increased and after World War II, Richfield flourished with commuters to Twin Cities jobs. As of 2019, Richfield has a population of about 35,000 residents who live within seven square miles of neighborhoods, parks, and shops.

Interstates 35W and 494 and Minnesota State Highways 62 and 77 are four of the main routes in the city. Other main routes include 66th Street.

The majority of the 10,000 single-family homes were constructed in the 1950s, and the 5,000 apartments date from the 1960s and early 1970s. The Richfield Rediscovered Housing Program has established an environment of change in the community as it encourages home remodeling, expansion, and reconstruction. The program is gradually changing the face of Richfield's residential neighborhoods, upgrading them from small, post-WWII styles to larger homes.

Richfield is home to the corporate campus of Best Buy

Best Buy Company, Inc. moved its corporate headquarters into the city in 2003, becoming the largest employer in Richfield.[21]

In 2007, Cedar Point Commons opened in Richfield at Cedar Avenue and 66th Street, adjacent to Minneapolis–Saint Paul International Airport. SuperTarget and The Home Depot serve as its anchor tenants.[24]

According to the City's 2014 Comprehensive Annual Financial Report,[25] the top employers in the city are:

The school district, Independent School District 280, serves about 4,200 students in Richfield and part of Edina in grades K-12. Richfield schools are divided into elementary schools, middle schools, and high schools.[27]

Outside of the school district there is Watershed High School.

Richfield has more than 450 acres (1.8 km2) of parkland, 23 neighborhood parks and a nature preserve.[31] Wood Lake Nature Center is a 150-acre (0.6 km2) park operated by the city of Richfield that features wetlands, walking paths and an interpretive center. When the Nature Center opened in 1971, it was one of the first urban nature centers in the United States, and is currently home to more than 200 different kinds of birds and 30 mammals.[32]

2017-2019 brought a major overhaul of 66th street to improve the look of the city and increase recreation opportunities, with new, dedicated bike and walking lanes for pedestrians.[35]