Robben Lee Ford (born December 16, 1951)[1] is an American blues, jazz, and rock guitarist.[2] He was a member of the L.A. Express and Yellowjackets and has collaborated with Miles Davis, Joni Mitchell, George Harrison, Larry Carlton, Rick Springfield, Little Feat and Kiss. He was named one of the "100 Greatest Guitarists of the 20th Century" by Musician magazine.[3]

Robben Ford was born in Woodlake, California, United States,[1] and raised in Ukiah, California. He began playing the saxophone at age 10 and the guitar at age 14. Robben and two of his brothers (Patrick and Mark) created the Charles Ford Blues Band in honor of and named after their father.[4] A fourth brother died in the Viet Nam conflict.

At age 18, Ford's band was hired to play with Charlie Musselwhite,[2] and recorded two albums The Charles Ford Band[1] and Discovering the Blues. He recorded two albums with Jimmy Witherspoon[5][citation needed] called Live and Spoonful. In the 1970s, Ford joined the jazz fusion band, L.A. Express,[2] led by saxophonist Tom Scott. In 1974, the band supported George Harrison on his American tour and played on the Joni Mitchell albums The Hissing of Summer Lawns and Miles of Aisles.[2] 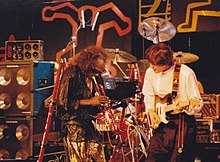 After leaving the L.A. Express in 1976, Robben Ford recorded his first solo album, The Inside Story with a band that later became the Yellowjackets.[2]

In 1977, Ford was one of half a dozen or so session players asked to play the guitar solo for the Steely Dan song "Peg." In the end, the group went with the version by Jay Graydon instead. In 2006, a tribute album to Steely Dan – The Royal Dan – was released, with Ford covering "Peg" in his own style.

In 1982, Ford was one of several guitarists who appeared on the KISS album Creatures of the Night, playing lead guitar on the songs "Rock And Roll Hell" and "I Still Love You".

Ford worked briefly with Miles Davis in 1986;[2] and can be heard on Davis' Montreux box set. Ford released his second solo album Talk to Your Daughter in 1988.[1] He joined Philippe Saisse, Marcus Miller and J.T. Lewis in the cast of The Sunday Night Band for the second and final season of the late-night NBC television program Sunday Night in 1989.[6] In the 1990s, he released the albums Robben Ford and the Blue Line, Mystic Mile, Handful of Blues, Tiger Walk and Supernatural.[1]

Robben Ford has received five Grammy Award nominations[7] and was named one of the "100 Greatest Guitarists of the 20th Century" by Musician magazine.[8] He credited pianist and arranger Roger Kellaway and saxophonist and arranger Tom Scott, whom he met while playing for Joni Mitchell, as a major influence on his musical development.[9]

Ford considers his first good electric a Guild Starfire III with a single Florentine (sharp) cutaway. He used a Gibson L-5 when he played with Charlie Musselwhite and the Ford Band, although he never thought it was a great guitar. While playing with Jimmy Witherspoon, Ford traded the L-5, plus $200, for a Super 400. When Ford began playing with the L.A. Express and Joni Mitchell, he used a 1958 Gibson dot-neck ES-335.

After Ford's Talk to Your Daughter album was released in 1988, Robben used a Robben Ford Signature model guitar created in a collaboration with Dan Smith of Fender and produced in Japan between 1987 and 1993. That guitar was based on the Fender Master Series Esprit Ultra that was produced from 1983 to 1986 in Japan. In 1987, new management at Fender authorized the first production of the Robben Ford Signature guitar. In 1994, production of the guitar moved from Japan to the Fender Custom Shop. Three models were produced: Ultra FM (with a carved maple top), Ultra SP (with a carved spruce top), and the Elite FM (with a carved flame maple top). The guitar line continued to be produced until 2002 when it was discontinued by Fender.

Sometimes he plays a vintage 1960 Fender Telecaster, Gibson Les Pauls,[10] or a 1963 Gibson SG.[11] Ford also owns other guitars including a 1966 Epiphone Riviera (with the original Bigsby tremolo removed and replaced with a stop tailpiece).

When traveling abroad he prefers taking his Dumble, but will sometimes use Fender Super Reverb or Fender Twin amplifiers.[13] More recently Robben has been using Little Walter amplifiers at home and in the studio.