Robots is a 2005 American computer-animated science fiction adventure comedy film produced by Blue Sky Studios and distributed by 20th Century Fox. It was directed by Chris Wedge, co-directed by Carlos Saldanha, and produced by Jerry Davis, William Joyce, and John C. Donkin, stars the voices of Ewan McGregor, Halle Berry, Greg Kinnear, Mel Brooks, Amanda Bynes, Drew Carey and Robin Williams,[3] and features music by John Powell. Development on the film began in 2000, when Wedge and Joyce failed to adapt Joyce’s book Santa Calls and they decided to do a story on robots. The story follows a robot named Rodney Copperbottom who seeks out his idol at his company in Robot City, only to discover a plot by its new owner to cheat older robots into buying expensive upgrades.

Robots was theatrically released on March 11, 2005. It grossed $260.7 million worldwide against a $75 million budget and received praise for its animation, humor and voice performances.

In a world populated by sentient robots, Rodney Copperbottom, son of Herb and Lydia Copperbottom from Rivet Town, is an aspiring young inventor. He idolizes Bigweld, a famous inventor, entrepreneur, and philanthropist whose company, Bigweld Industries, hires other inventors and provides robots with spare parts. Following Bigweld's example to "see a need, fill a need", Rodney develops a small, flying robot, named Wonderbot, to assist his father, who works as a dishwasher at a restaurant. When Herb's supervisor Mr. Gunk confronts them, Wonderbot malfunctions and wreaks havoc in the kitchen, and Herb is put into debt as a result.

To help Herb pay for the damages, Rodney decides to move to Robot City, hoping to present Wonderbot to Bigweld Industries. Upon his arrival at Robot City, Rodney is ejected from Bigweld Industries by Bigweld's second-in-command Phineas T. Ratchet, who was the company's current head and, in Bigweld is absent, has stopped producing spare parts and inventions in favor of expensive "upgrades", thereby "outmoding" robots who are unable or unwilling to pay for them. Ratchet's mother, Madame Gasket, runs the Chop Shop, a facility that collects scrap and spare parts (and sometimes outmoded robots) and melts them to create ingots for Upgrades.

Rodney befriends Fender Pinwheeler, a ne'er-do-well he met at the train station. Fender takes him in to a boarding home populated by other outmodes, known collectively as the "Rusties". Word of Rodney's mechanical prowess spreads, and he is hailed as a local hero after he and the Rusties fix outmodes throughout the neighborhood, although they are eventually unable to cope with the demand due to the spare part shortage. Hoping to enlist Bigweld's help, Rodney and Fender infiltrate the Bigweld Ball – where Bigweld usually makes an appearance – only for Ratchet to announce that Bigweld will not attend. Enraged, Rodney publicly berates Ratchet, who orders his security team to eliminate him. Cappy, a Bigweld Industries executive opposed to Ratchet's plans, rescues Rodney while Fender is captured by a Sweeper, a vehicle that collects scrap metal and outmodes, and taken to the Chop Shop where he discovers Gasket and Ratchet's plan to use a heavily-armed fleet of Super-Sweepers to destroy all outmodes throughout the city in order to make and sell more ingots.

Meanwhile, Rodney and Cappy fly to Bigweld's mansion, where they eventually find Bigweld and tell him what has been going on. Bigweld reveals that Ratchet's greed and business sense won over his idealism in the management of Bigweld Industries, and orders Rodney and Cappy to leave. Crushed, Rodney calls his parents and plans to return to Rivet Town. Herb encourages Rodney to fight for his dreams, or he will spend the rest of his life regretting it like Herb did. Fender returns upon escaping from the Chop Shop and reveals Ratchet and Gasket's plot. Rodney rallies Cappy and the Rusties to stop them. They are joined by Bigweld, who has regained his resolve after realizing how much he and his ideals meant to Rodney.

The group returns to Bigweld Industries where Bigweld fires Ratchet, who ultimately knocks him unconscious, planning on melting him down as well. Rodney, Cappy, and Wonderbot rescue Bigweld from Ratchet and escape with the Rusties in a security vehicle with Ratchet close behind. Rodney unclips Ratchet’s vehicle to break free, but their vehicle loses control in front of the Chop Shop and Bigweld is rolled inside. Refusing to give up, Rodney upgrades the Rusties to rescue Bigweld. Rodney, Cappy, and the Rusties, alongside an army of outmodes that Rodney had repaired earlier, battle Ratchet, Gasket, and their army of workers. Rodney and Bigweld immobilize the Super-Sweepers and defeat Ratchet, who accidentally kills Gasket by knocking her into the incinerator while trying to escape. Ratchet is accidentally stripped of his upgrades, being left chained to the ceiling with his father.

Taking control of Bigweld Industries once again, Bigweld promises to make spare parts available to everyone. Later, he holds a public ceremony in Rivet Town, where he nominates Rodney as his new second-in-command and eventual successor. Rodney provides Herb with new replacement parts and a flugelhorn-like instrument to fulfill his dream of being a musician. After a shaky start, Herb leads Rodney, Cappy, the Rusties, Bigweld and the townspeople in a rousing rendition of "Get Up Offa That Thing". 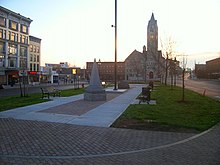 Rivet Town was rumored to be based on Watertown, New York, where director Chris Wedge lived during his teens. However, Wedge dismissed this in an interview.[7]

Initially, Chris Wedge and William Joyce had decided to make a film adaptation of Joyce's book, Santa Calls. After a failed animation test in 2000, Wedge and Joyce decided to develop an original story about a world of robots instead. In 2001, the duo pitched the concept to Chris Meledandri, as a visual idea. While not initially impressed, Meledandri agreed to greenlight the film, and served as the executive producer.[8] The film began production in 2002, shortly after Ice Age was released. Wedge reunited with the crew from his first film, including Carlos Saldanha as the co-director. In June 2003, the film was announced by Fox at the Museum of Natural History’s IMAX theater. This announcement confirmed the entire cast, and slated the film for its 2005 release.[9]

Robots was originally scheduled for a 2004 release,[10] but the release date was changed to 2005. The film premiered on March 6, 2005 in Westwood, Los Angeles,[4][5] and it was released theatrically on March 11, 2005. The film was the first to feature the new trailer for Star Wars: Episode III – Revenge of the Sith, where it was reported that Star Wars fans went to see the movie just to see the trailer and hear the voice of Ewan McGregor, who also played Obi Wan Kenobi in the Star Wars prequel trilogy, as Rodney Copperbottom. The film also featured the exclusive trailer for Blue Sky's next film Ice Age: The Meltdown, then called Ice Age 2.[11] Robots was digitally re-mastered into IMAX format (IMAX DMR) and released in select IMAX theatres around the world. It was the first 20th Century Fox film that was released on the same day on IMAX and conventional 35mm screens. It was also the first IMAX DMR film released in the spring season, and the second IMAX DMR film distributed by Fox. and the Short film after Ice Age in 2002 Gone Nutty has release in theaters in IMAX When scrat tried a Acorn and Falling in the Atmosphere Earth.[12]

The film, released on DVD and VHS in both fullscreen and widescreen on September 27, 2005,[13] was accompanied by an original short animated film based on Robots, titled Aunt Fanny's Tour of Booty.[14][15] The film was released in high-definition on Blu-ray Disc on March 22, 2011.[16]

On the review aggregator website Rotten Tomatoes, the film has an approval rating of 64% based on 182 reviews, with an average rating of 6.50/10. The site's consensus reads: "Robots delights on a visual level, but the story feels like it came off an assembly line."[19] Another review aggregator, Metacritic, gives the film a weighted average score of 64 out of 100 based on 33 reviews, indicating "generally favorable reviews".[20]

Roger Ebert of the Chicago Sun-Times gave the film three and a half stars out of four, stating that "this is a movie that is a joy to behold entirely apart from what it is about. It looks happy, and, more to the point, it looks harmonious."[21] Caroline Westbrook of the Empire Magazine gave the film a three out of five stars and said: "Kids will love it and their adult companions will be warmly entertained - but it's far from a computer-animated classic."[22] Rob Mackie of The Guardian gave the film a three out of five stars, saying: "skilfully combines adult and kids' comedy. But For all the imaginative splendours and a sharp script, Robots is never quite as distinctive as its predecessor, Ice Age."[23] Common Sense Media gave the film a three out of four stars and said: "Endearing 'follow your dreams' story with plenty of laughs."[24]

The film is recognized by American Film Institute in these lists:

Aunt Fanny's Tour of Booty is a five-minute computer-animated film that was included as a bonus feature on the DVD release of Robots and is a prequel to the film. In the short, Aunt Fanny/Fan gives a tour of the Robot City Train Station to a motley collection of robots, including Fender Pinwheeler, Zinc, Tammy, Hacky, and an Old Lady-Bot.[14][15]