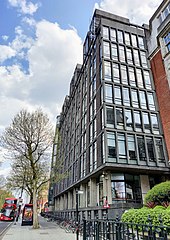 The Darwin Building in Kensington Gore

The RCA was founded in Somerset House in 1837 as the Government School of Design[3] or Metropolitan School of Design.[4] Richard Burchett became head of the school in 1852.[5] In 1853 it was expanded and moved to Marlborough House, and then, in 1853[3] or 1857,[4][5] to South Kensington, on the same site as the South Kensington Museum. It was renamed the Normal Training School of Art in 1857[4] and the National Art Training School in 1863.[5] During the later 19th century it was primarily a teacher training college; pupils during this period included George Clausen, Christopher Dresser, Luke Fildes, Kate Greenaway and Gertrude Jekyll.[5]

In September 1896 the school received the name Royal College of Art,[6] and the emphasis of teaching there shifted to the practice of art and design.[3] Teaching of graphic design, industrial design and product design began in the mid-twentieth century. The school expanded further in the 1960s, and in 1967 it received a Royal Charter which gave it the status of an independent university with the power to grant its own degrees.[3]

The Darwin Building in Kensington Gore. South Kensington, was completed 1960-1963. It is a short distance from the RCA's home 1896-1967 in the Henry Cole Building, now part of the V&A Museum. The Darwin Building was designed by a team of RCA staff members, H. T. Cadbury-Brown, Hugh Casson and Robert Goodden.[8] and since 2001 has been a Grade II listed building. It is named after painter Sir Robert Vere Darwin, known as Robin Darwin, who was RCA Rector at the time it was commissioned. Although there was modest development into the mews behind the Darwin Building, the restricted site meant further expansion had to be on another part of London.

In 1991 the sculpture department moved to a converted factory in Battersea. In the early 2000s the college conceived a substantial extension on the site, with a minibus service linking it to Kensington. After a redevelopment by Wright & Wright (budget £4.3m, floor area 2,500 sq m), the Sculpture Building opened in Battersea in January 2009.[9][10] In 2018 the RCA was granted planning permission to redevelop the Sculpture building into a new Arts & Humanities building, designed by Herzog & de Meuron, with work planned for completion in late 2021.[11]

A masterplan was commissioned from Haworth Tompkins and phase 1 of their three-phase design was completed with the opening of the Sackler Building on 19 November 2009, to house the painting department. Its name commemorates a major gift by The Dr Mortimer and Theresa Sackler Foundation.[12][13][14] 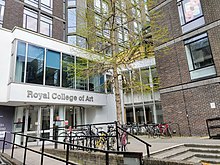 The Dyson Building, named in honour of James Dyson, whose charity donated £5m towards the £21m cost, was opened on 24 September 2012. It houses printmaking and photography, and contains an innovation wing where start-up designers can launch their businesses.[15][16] The Woo Building was opened on 30 September 2015, completing the Battersea project. It is named in honour of Sir Po-Shing and Lady Helen Woo, who have funded scholarships at the RCA since the 1990s. It accommodates the Ceramics & Glass and Jewellery & Metal programmes. The building's anodised aluminium gates were designed by alumnus Max Lamb.[17][18]

In 2017 RCA White City became the third RCA campus, co-located with the BBC Media Village and accommodating the School of Communication, Animation and Digital Direction and Communication Design [19] in buildings designed by Allies and Morrison.

The RCA offers a Graduate Diploma pre-masters conversion programme, MA, MRes, MPhil and PhD degrees[20] in twenty-eight subject areas, divided into four schools: architecture, arts & humanities, communication, and design. The history of design programme is in collaboration with the Victoria and Albert Museum; there are two double MA/MSc programmes with Imperial College London.[21]

In addition to formal qualifications the RCA also offers Summer school and Executive education courses throughout the year. English for academic purposes (EAP) courses are offered to applicants who need to improve their academic English ability to meet the College's entry requirements.

In early 2019, the RCA announced the launch of its new GenerationRCA programme. GenerationRCA -among other initiatives- will also "inject science disciplines into the mix of creative disciplines traditionally on offer." The new programmes will include Environmental Architecture and Digital Direction; with future programmes centred on nano and soft robotics, computer science, and machine learning, material science and the circular economy.[22]

In 2021, the RCA was placed first in the art and design subject area in the QS World University Rankings published by Quacquarelli Symonds for the seventh year in a row, with an overall score of 98.9/100.[23][24][25]

In August 2015 it was ranked first on a list of master's courses in fashion by Business of Fashion, a fashion website.[26][27]

In April 2011 the RCA was ranked first on a list of UK graduate art schools compiled by Modern Painters magazine from a survey of professionals in the art world.[28]

In the Research Assessment Exercise of December 2008, 40% of the research output of the school received the highest (4* or "world-leading") assessment, the third-highest rating in the art and design subject area; over all subject areas only about fifty institutions received a higher rating.[29]

The Royal College of Art and its predecessor schools have numerous notable alumni.

Among those who studied in the RCA predecessor bodies in the nineteenth century were Sir George Clausen, Christopher Dresser, Sir Luke Fildes, Kate Greenaway, Gertrude Jekyll[5] and Edwin Lutyens.

As of February 25, 2021, Virgil Abloh has joined staff as a Visiting Professor [citation needed] "to reinforce the importance of education and hands on mentorship of future generations."[30]

The Royal College of Art has several awards and prizes which it confers on its graduating students. These include the Sheila Robinson Drawing Prize.